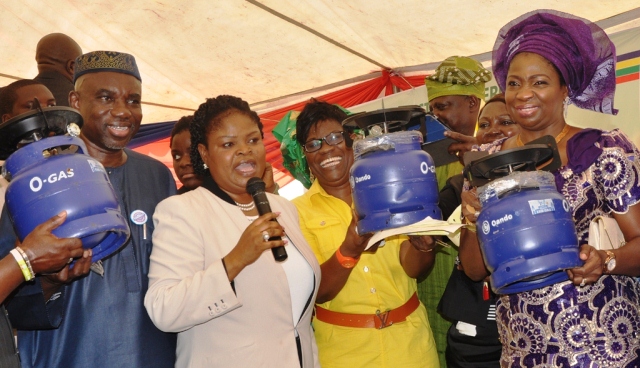 Speaking at the Ewu Elepe Village, Ginti, venue of the commissioning, Governor Fashola, who was represented by his Deputy, Princess Adejoke Orelope-Adefulire, said one of the priorities of his administration in this second term was to revamp and reposition the Energy Sector in the State to enable it play its role in the socio-economic and environmental development of the State.

Expressing dismay that Nigeria is ranked the lowest in the use of LPG in the continent, in spite of its position as the largest producer of the product, the Governor declared, “We also recognize the immense potential of the country’s gas resources. It is only right that we devise a means to apply the existing solution to an existing problem meaning that this gas can be used to provide electricity for our country Nigeria”.

On the reason for introducing the cooking gas to Lagos state residents, Governor Fashola said, “A large percentage of households in Nigeria still use kerosine and firewood for cooking. These two fuels are not only the major sources of emission but on the long run may be more expensive than LPG”.

He said the Lagos State government recognizes the negative impact the current cooking fuel, kerosene and firewood, pose to the environment and people in terms of emission, “The use of LPG has several advantages as fuel because of its simple structure and because it is free from impurities, making it one of the few clean and efficient burning fuels in the world”.

He said the State Government was “working seamlessly” to strengthen the needed infrastructure, to ensure the development of the oil sector and to ensure that Lagos residents could make a shift using liquefied petroleum.

In his remarks earlier, the Managing Director of Banner Gas, one of the companies partnering with the State Government in the venture, Mr. Nuhu Yakubu, said the introduction of LPG, christened EKO Gas, was a demonstration of the State Government’s commitment to “Talk – to –Action”.

He said, “Before the year runs out, we are very sure and convinced that the Lagos State Government will have the course to commission more projects under the Energy programme of the State Ministry of Energy and Mineral Resources”, the Managing Director said adding that his company would be happy to have the Governor commission another Banner Gas- Eko Gas project powered by Banner Gas.

Four months ago, this kind of plant was launched in Surulere by the Lagos State Governor, Mr. Babatunde Fashola (SAN).