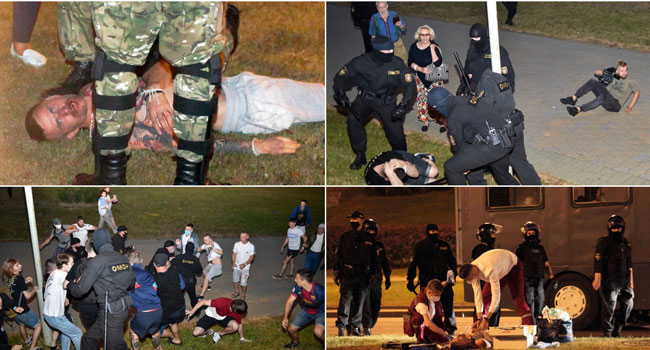 The Viasna Human Rights Centre said the young male protester suffered a traumatic head injury when he was hit by a police vehicle and medics were unable to save him.

Viasna representative Sergey Sys told AFP that more than 300 people had been arrested on Sunday, including more than 150 in the capital Minsk.

“Dozens of people were wounded as a result of clashes with law enforcement agencies. Ten of them were taken to hospitals,” he said.

Interior Ministry spokeswoman Olga Chemodanova denied there had been any deaths.

The Viasna Human Rights Centre said at least 110 people were detained in the capital Minsk, including at least 40 at or near polling stations and 70 during a pro-opposition protest. Others were detained in various cities. 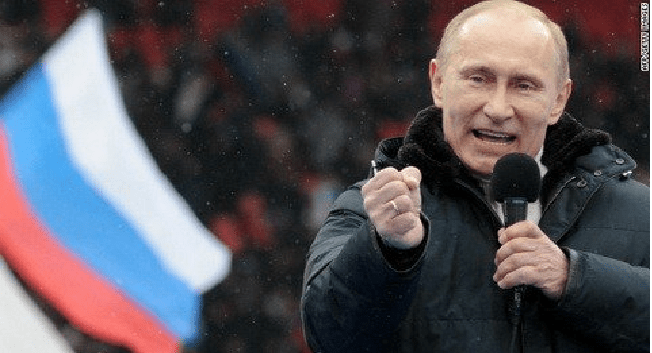 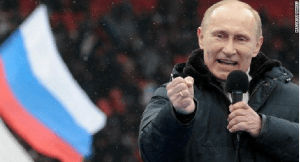 Vladimir Putin was being interviewed on state television when he was asked if he expected a war between the two countries.

In his interview – his first extended comments since the ceasefire deal was agreed on 12 February – Mr Putin was asked if there was a real threat of war, given the situation in eastern Ukraine.

“I think that such an apocalyptic scenario is unlikely and I hope this will never happen,” he said.

Mr Putin said that if the Minsk agreement was implemented, eastern Ukraine would “gradually stabilise”.

“Europe is just as interested in that as Russia. No-one wants conflict on the edge of Europe, especially armed conflict,” he said.

Mr Putin also said he did not see the need for another meeting with France, Germany and Ukraine on peace in the region and that he hoped the accords agreed to in Minsk would be respected.

He added that the four countries trust each other “on the whole”.

Mr Putin’s words came after Ukraine had halted the withdrawal of heavy weapons from the front line, blaming continuing attacks from pro-Russian rebels.

However, Ukraine claimed there had been attacks against its forces and is now refusing to budge.

Lieutenant Colonel Anatoliy Stelmakh said the retreat would not proceed until rebel attacks stop entirely – something that was supposed to occur from 15 February.

Foreign ministers from Ukraine, Russia, France and Germany are meeting in Paris on Tuesday to discuss the ceasefire. 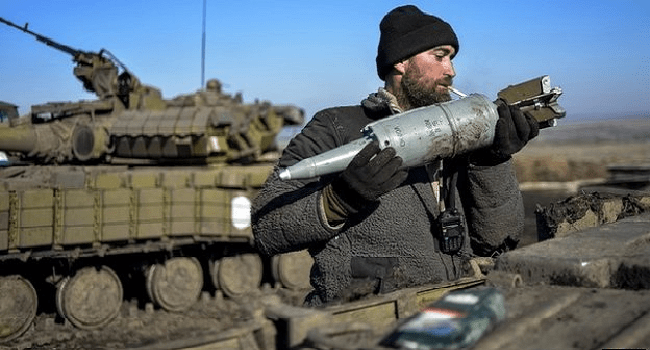 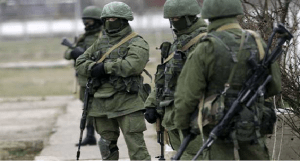 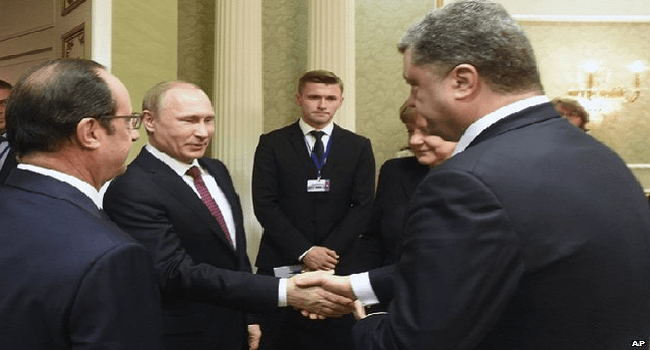 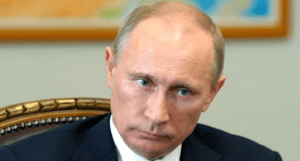 After marathon talks with leaders of Ukraine, France and Germany, Russia President, Vladimir Putin said “We have managed to agree on the main issues.”

French President, Francois Hollande also said it was a “serious deal” but not everything had been agreed.

The meeting in Belarus – which began on Wednesday – was focused on securing a ceasefire, withdrawal of heavy weapons and creating a demilitarized zone in Eastern Ukraine.

Before the meeting started, the Ukrainian President Petro Poroshenko had said that achieving a ceasefire was significant. Thousands of people have been killed and indisposed in the fighting.

Russia has been accused of arming and reinforcing pro-Russian rebels in east Ukraine, a claim That was denied.  The talks are set to focus on securing a ceasefire, withdrawal of heavy weapons and creating a demilitarized zone.

The Ukrainian and Russian presidents barely looked at each other when they were forced to shake hands. At a family photo of the leaders, not a single person was smiling. There was even an image of Vladimir Putin inside the negotiations snapping a pencil in two.

Heavy shelling was reported in the rebel-held city of Luhansk; by a freelance reporter, Pierre Sautreuil, (in French) that a rebel military base seemed to be the target of one bombardment in the south-east of the city.

Mr Poroshenko had earlier said that the situation threatened to spin “out of control” if the parties did not agree to ceasefire.

The Ukrainian warned that his government was prepared to impose martial law, adding that the Minsk summit was one of the final chances to bring about an unconditional ceasefire and withdrawal of heavy weapons.

US President Barack Obama has refused to rule out supplying “lethal defensive weapons” to Kiev if diplomacy fails, but Russia says that would worsen the crisis. 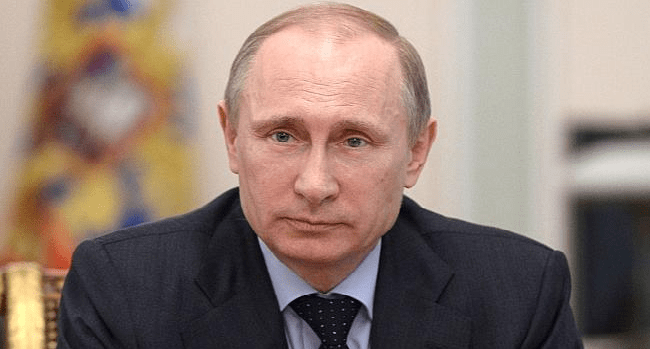 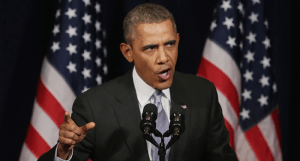 US President, Barack Obama has warned the Russia President, Vladimir Putin, that the cost of Russia will rise if it continues its “aggressive actions” in Ukraine.

Mr Obama in a telephone statement, urged Vladimir Putin to seize the opportunity to find a peaceful solution to the war that has raged since April last year.

Mr Putin is to meet with the leaders of France, Germany and Ukraine at a summit in Belarus on Wednesday. The summit in Minsk, Belarus capital, is expected to focus on securing a ceasefire and the withdrawal of heavy weapons, as well as the creation of a demilitarized zone.

A statement from White House says, “If Russia continues its aggressive actions in Ukraine, including by sending troops, weapons, and financing to support the separatists, the costs for Russia will rise.”

President Obama called  Mr Putin on the eve of the talks to reiterate US support for Ukraine, just days after he refused to rule out supplying “lethal defensive weapons” to Kiev if diplomacy fails.

Russia, however, has warned the West that sending arms to Ukraine would worsen the crisis.

On Tuesday, four soldiers and at least eight civilians were killed in rocket attacks on a key military base and a residential area in Kramatorsk. Government officials said the rockets were fired from a rebel-held area, but separatists denied being behind the attack.

Unconfirmed number of persons was killed and several injured when a shell hit a bus station in rebel-controlled Donetsk early on Wednesday. The body of a man was seen behind the wheel of a minibus after a shell fell through the roof of the station, burning up the vehicle and another beside it.

Emergency services at the scene said another person had died in hospital following the attack, while two people were seriously wounded. There was no immediate comment from rebel authorities or the Kiev-controlled regional administration.

More than 5,400 people have died since the conflict began and civilian casualties have risen in recent weeks.