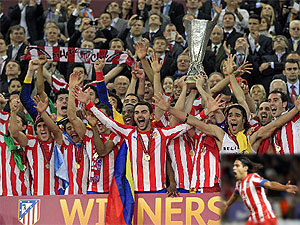 Radamel Falcao has stopped the new European Champions Chelsea’s chances of claiming a possible seven trophies this season as he cut it down to five after slicing the Blues’ with a remarkable first half hat-trick struck as the Champions League winners Chelsea fell 4-1 to Atletico Madrid claiming the UEFA Super Cup in Monaco today.

Roberto Di Matteo’s men lost 3-2 to Manchester City in the FA Community Shield on August 12th but still have to compete in the FIFA World Club Cup in addition to four other competitions, namely the Premier League, the Capital One Cup, the FA Cup, and the UEFA Champions League.

The Colombia international beat the Chelsea defense for a chipped first goal towards the inside of the post in the seventh minute before curling in an incredible second goal with his left foot in the 19th.

He continued his unstoppable ways with a close-range header that beat Petr Cech but came off the post midway through the first half.

Towards the end of the period, though, he ensured there was no chance he would be denied a well-deserved third when he slid home clinically between the legs of Cech.

The Europa League winners was poised to lift the prestigious Super Cup trophy at the expense of a Chelsea side that is on track to lose the second of seven possible trophies this season.

Linked with a move to Stamford Bridge in the past, the Colombian striker showed just why the Blues had coveted him with a superb treble that put the result beyond doubt by the break.

Falcao had already hit the bar by the time he broke the deadlock after six minutes and he doubled his side’s advantage with a left-footed curling finish that left Peter Cech with no chance.

His third came when he rounded off fine a counter-attacking move just before the interval, meaning he had scored a hat-trick for the second time in six days.

Defender Miranda added a fourth on the hour and although Chelsea did get a goal back through Gary Cahill.