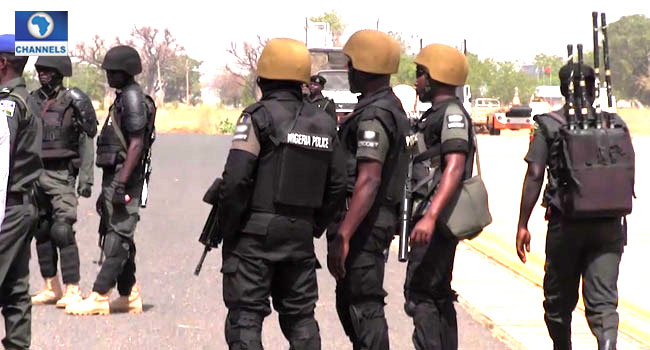 Four senior police officers have been sacked from service for engaging in serious misconduct and acts unbecoming of public officers.

The Police Service Commission said this in a statement issued on Sunday by its Head, Press and Public Relations, Ikechukwu Ani.

Ani said that the PSC took the decision at the 10th Plenary Meeting presided over by its Chairman, Mr Musiliu Smith, a retired Inspector General of Police on Friday.

“A Chief Superintendent of Police, CSP, was dismissed for discreditable conduct, dishonesty and act unbecoming of a public officer,” the statement partly read.

“A Superintendent of Police was also dismissed for conspiring with four others to vandalize a transformer and stealing. The Commission also directed that the Officer should be prosecuted.

The PSC spokesman explained that the DSP led a team that intercepted three Mercedes Benz trucks conveying about 300,000 live cartridges believed to have been smuggled across the border from the Benin Republic.

The Police Service Commission has dismissed four senior Police Officers over cases of serious misconduct and acts unbecoming of public officers. The Commission also reduced in rank two other Officers while also handing punishments of severe reprimand and reprimand to four others (two each).

The Commission took these decisions at its 10th. Plenary Meeting presided over by Commission Chairman, Musiliu Smith, a retired Inspector General of Police and which came to an end on Friday, December 18th, 2020.

The two other dismissed Officers are a Deputy Superintendent of Police and an Assistant Superintendent of Police. The DSP was said to have led a team that intercepted three Mercedes Benz trucks conveying about 300,000 live cartridges believed to have been smuggled across the border from Benin Republic into Nigeria. The team was said to have impounded the trucks at base for three days but made no entries nor a situation report of the arrest relayed. The DSP rather raised a fake letter purporting to escort the vehicles and suspects to Federal SARS Lagos with the dubious intention of ensuring their unlawful release. Luck however ran out of the team when they were intercepted at a Military checkpoint where soldiers on duty insisted on verifying the contents of the trucks. The DSP and his team were said to have abandoned the trucks and fled.

The ASP was dismissed for misappropriation, action prejudicial to the security of the state; sabotage; dishonesty and act unbecoming of a public officer.

The new DIGs are expected to represent their geo-political zones in the Police Management Team. 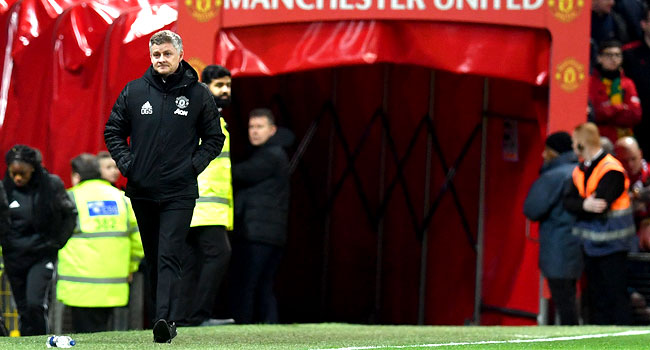 Manchester United have been charged by the Football Association (FA) over the misconduct of their players in the 2-0 defeat by runaway Premier League leaders Liverpool.

Roberto Firmino subsequently scored, but his goal was ruled out following a VAR review of van Dijk’s clash with the Spanish goalkeeper.

De Gea dropped the ball which the defence failed to clear allowing Firmino to take advantage and score.

“Manchester United FC has been charged with a breach of FA Rule E20(a),” read the FA statement.

“It is alleged that the club failed to ensure its players conducted themselves in an orderly fashion during the 26th minute of the Premier League fixture against Liverpool FC on Sunday (19/01/20).”

A furious De Gea led United protests, rushing over to Pawson to vent his frustration. The Spaniard, who was booked for his actions, was joined by a number of his team-mates in surrounding Pawson.

Van Dijk had already opened the scoring for Liverpool prior to the incident and Mohamed Salah added a second in time added on to extend Liverpool’s lead over Manchester City to 16 points — United trail by 30 points.

United have until Thursday to respond to the charge. 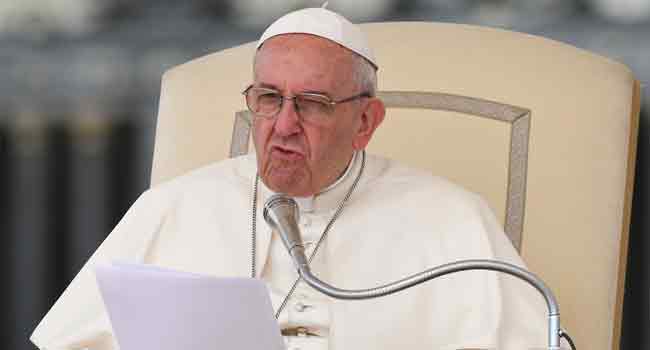 Pope Francis has accepted the resignation of Los Angeles auxiliary bishop Alexander Salazar over his “misconduct” with a minor, the Vatican said on Wednesday.

The case is the latest in a litany of child sexual abuse scandals to have rocked the Roman Catholic Church of 1.3 billion followers around the world.

The Vatican said an investigation by the Archbishop of Los Angeles had found suspicions about Salazar’s behaviour to be “credible”.

A letter from the archbishop, Jose H. Gomez, said that in 2005 he had been “made aware of an allegation against Bishop Salazar of misconduct with a minor” during the 1990s when he was serving as a parish priest.

The allegations were investigated by the police but not prosecuted, Gomez said.

He said that since Salazar was a bishop when the allegations were made, he had passed the issue to the Vatican “which conducted an investigation and imposed certain precautionary measures”.

Salazar “consistently denied any wrongdoing,” Gomez said, and after obtaining permission from Rome, he had put the matter in the hands of the archdiocese’s “independent Clergy Misconduct Oversight Board.”

“The Board found the allegation to be credible and I submitted its findings and recommendations along with my own votum to the Holy See to make its final determination as to Bishop Salazar’s status,” he said.

“These decisions have been made out of deep concern for the healing and reconciliation of abuse victims and for the good of the Church’s mission.

“Let us continue to stay close to the victim-survivors of abuse, through our prayer and our actions.” 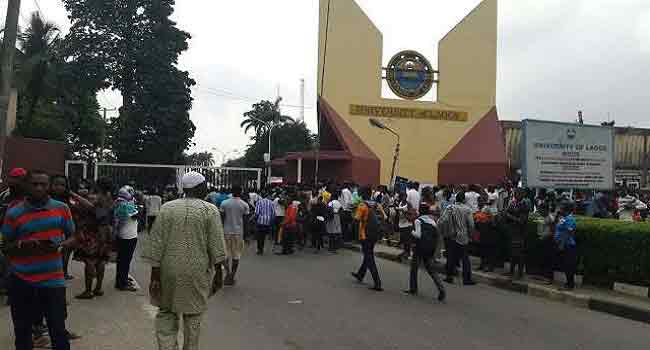 The University of Lagos has ordered the immediate expulsion of 125 students of the institution for forgery and academic misconduct.

UNILAG’s Deputy Registrar in charge of information, Toyin Adebule, says beyond the list posted on the institution’s website, the names and photographs of the affected students will soon be published in the media and pasted in different areas of the school.

He added that UNILAG’s action aligns with its commitment to rid the school of all forms malpractices and vices.

According to him, the penalties meted out to the students were based on the severity of the offences. Some of those rusticated were caught smoking Marijuana on campus, while others were engaged in various forms of misdemeanor.

The offences of those expelled were mainly for forged results while the rest were for academic misconduct.

Mr. Adebule, however, insists that this rustication and expulsion of these 323 students of the institution had anything to do with the recent students’ riot.

In September, some students who were earlier rusticated from the school carried out a peaceful demonstration, over what they termed an alleged violation of their rights by the school’s authority. 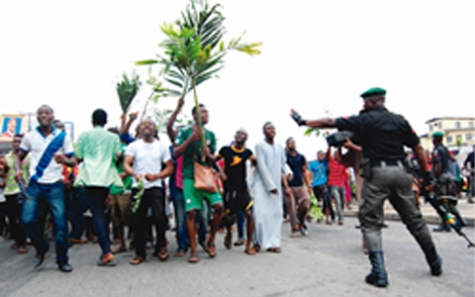 The protest resulted from the suspension of members of the students’ union and the rustication of a student from the environmental sciences department, identified as Adeyeye Olorunfemi, who criticized the management of the institution.

In his open letter to the management which he shared on Facebook, Olorunfemi called out members of the school’s management board, bluntly accusing them of being irresponsible, insensitive and irresponsive to the welfare of the students.

The students claim they are being punished for merely protesting against poor living conditions on campus. They described the punishment meted on members of the Students Union as unjust, meanwhile the acting Dean has dismissed the issue.

Those fortunes, according to Mr. Adebule, have already been sealed. 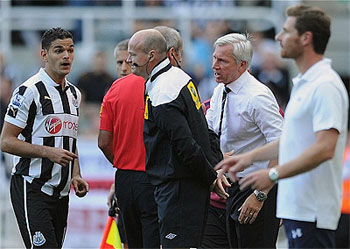 Alan Pardew; Newcastle United Manager has been charged by the Football Association for shoving assistant referee Peter Kirkup from Northampton.

The incident happened during the game between Tottenham Hotspurs and Newcastle United which ended in favour of Newcastle United in a Barclays Premier League game which took place on Saturday.

Although Pardew gave an unreserved apology afterwards but this didn’t prevent the FA from bringing the hammer on the manager and he has been given till 4pm on Thursday to respond to the charge.

Pardew said it was ridiculous and he has apologised publicly saying Kirkup was right in front of him and he thought the ball was out and he shoved him.

Pardew said he went to see him and told him it was stupid and he didn’t know what he was thinking.

Pardew was ordered to watch the final 20 minutes of the match at Sports Direct Arena from the stands.

Pardew reacted angrily having thought Kirkup had missed a throw-in for his side moments before Spurs shot narrowly wide.

The incident was missed by referee Martin Atkinson but it was immediately brought to his attention by fourth official Lee Mason.