Some members of the All Progressives Congress (APC) in the North central zone have asked President Goodluck Jonathan to appoint an impartial Inspector General of Police (IGP), insisting that the present one lacks the capacity to be fair to all Nigerians.

The Senate Minority Leader, Senator George Akume and a governorship aspirant on the APC platform, Mr Solomon Dalung, from Plateau State made the call on Monday at a mega rally organised to seek the re-election of governor Tanko Al-makura of Nasarawa State.

The party leaders, who gathered in Lafia to drum support for Mr Al-makura, condemned the action of the Acting IGP, Mr Suleiman Abba, who withdrew the security details of the speaker of the House of Representatives, Honourale Aminu Tambuwal.

After the security personnel attached to Mr Tambuwal were withdrawn on October 30, the police in a statement issued by its spokesman, Mr Emmanuel Ojukwu, cited the recent defection by Mr Aminu Tambuwal from the Peoples Democratic Party to the APC as reason.

Part of the statement read, “…having regard to the clear provision of section 68 sub section 1(g) of the 1999 Constitution of the Federal Republic of Nigeria as amended, the Nigeria Police Force (NPF) has redeployed its personnel attached to his office.”

At the rally in Lafia, thousands of pro-Al-makura supporters drawn from Nasarawa southern senatorial zone, gathered to endorse the governor to seek re-election.

To drive home his message of support for Governor Al-makura, Senator Akume, enumerated the achievements of the governor, with education topping the list.

While all the mass support for Mr Al-makura is going on, the immediate past Attorney General and Commissioner of Justice, Mr Innocent Lagi, joined the list of those seeking to unseat the Governor.

Lagi is seeking to oust his former boss on the platform of the Labour Party. He denied ever belonging to the APC, insisting that he has solution to the challenges the Al-makura led administration had been unable to address.

Besides the mass endorsement of Governor Al-makura by all the zones and groups, there is the growing concern among indigenes of the state as political intrigues continue to dominate the game ahead of 2015. 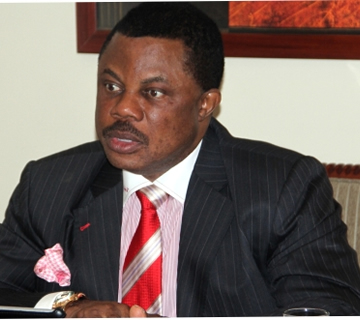 The governor of Anambra State, Mr Willie Obiano, on Wednesday explained the use of drones in the state.

At a meeting with the inspector General of Police, the governor said contrary to claims that the drones were been used to search for kidnappers, it has been put to use for agricultural mapping and proper identification of erosion site.

He also defended the pulling down of houses serving as hideouts for kidnappers in the state, insisting that the action of his administration has restored the confidence of investors and the people of Anambra state to invest more in the state.

The Inspector General of Police, Mr Suleiman Abba, commended the governor for making security a priority in his administration and for his contribution towards equipping the police force in the state.