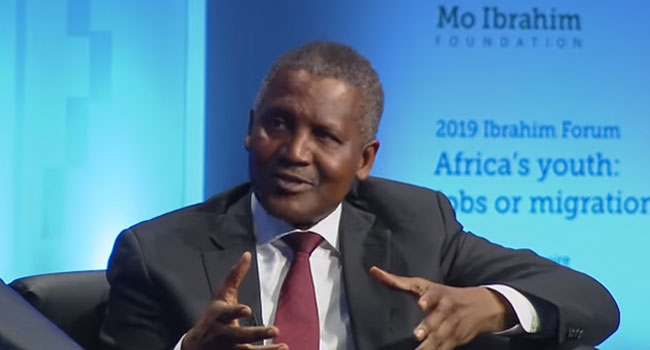 Aliko Dangote has revealed that he once withdrew $10 million just to prove to himself that he was rich.

Dangote who is Africa’s richest man revealed this on Saturday, April 6, at the Mo Ibrahim governance weekend in Abidjan, while he was chatting with the convener, Mo Ibrahim.

Dangote said, “The way it is that when you first start a business, your target is to make your first million. Fine, I did that. 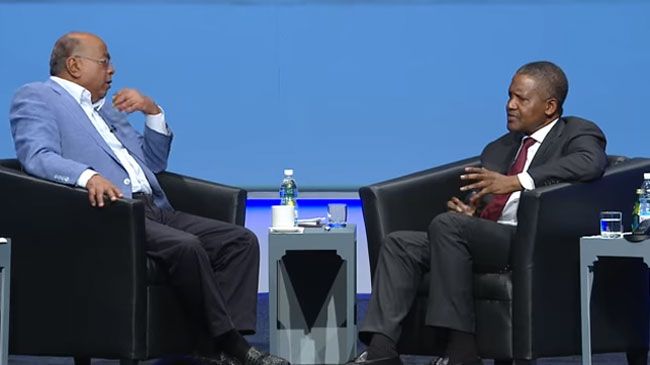 “After a year or so, I realised that I had much more, and I said ok, fine, all these numbers are just written numbers.

“One day I went to a bank, and at that time, there were no restrictions, and I wrote a cheque and cashed $10m from the bank and put it in the boot of my vehicle, and I went home and I opened it and I looked at $10m and I said ‘now I believe I have money’.”

Meanwhile, the Chief Executive Officer of Dangote Group, Aliko Dangote, has called on governors in Northern Nigeria to do more in mobilizing local private sector investors in their states.

Dangote made the call at the Kaduna Economic and investment summit on Wednesday, where he stated that such a move can spur huge inflow of private capital, reduce insecurity, unemployment, and poverty.

“Northern Nigeria will continue to fall behind if the respective state government does not move to close the development gap. Closing these gaps requires huge multi-year investment and the government will not be able to raise the capital required to fund this. Only the private sector can raise the capital required to fund the level of investment this country needs. 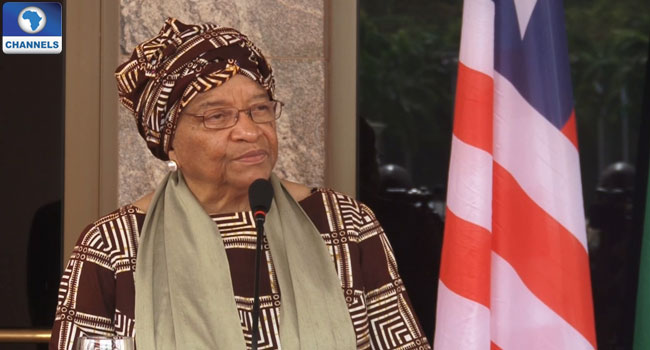 “As the first woman to receive this Mo Ibrahim Foundation Prize award, it is my hope that women and girls across the continent are inspired to break down barriers,” said the 79-year-old who left office earlier this year.

“Where there is a first, there will be a second.”

The world’s richest individual prize is given to a democratically-elected African leader who has demonstrated exceptional leadership, served their mandated terms and left office within the previous three years.

“I stand before you today an imperfect leader, from a complex, post-conflict society, on a continent of uneven progress, during a time of global uncertainty,” she told an audience of African and foreign officials in the Rwandan capital Kigali.

Sirleaf is no stranger to international acclaim having shared the 2011 Nobel Peace Prize as a champion for women’s rights.

The Ibrahim prize, founded by Sudan-born telecoms tycoon Mo Ibrahim, has only been awarded five times since its inception in 2007.

The philanthropist has said in the past that making no award sent just as strong a message on African leadership.

When Sirleaf’s win was announced earlier this year Ibrahim praised her leadership of Liberia.

“In very difficult circumstances, she helped guide her nation towards a peaceful and democratic future, paving the way for her successor to follow,” he said in February.

“I am proud to see the first woman Ibrahim laureate, and I hope Ellen Johnson Sirleaf will continue to inspire women in Africa and beyond.” 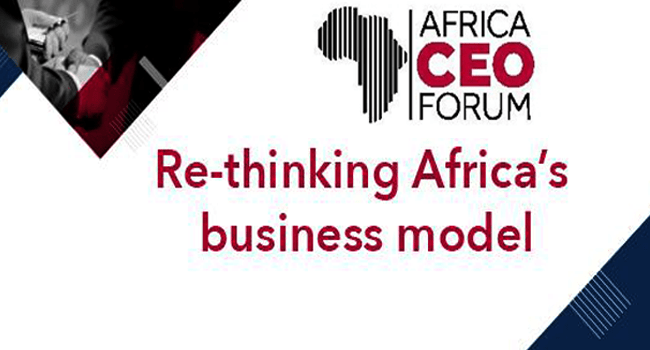 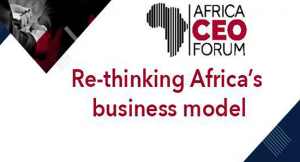 The founder of global corruption think tank, Mo Ibrahim, has cautioned the international community against criticising corruption in Africa without setting the right examples, insisting that Europe is hypocritical in the fight against corruption.

Tax evasion and the use of bribery by international corporations to obtain contracts topped the list of issues discussed at a Global Corruption meeting in London organised by the Royal Institute of International Affairs, Chatham House on Monday.

“Business has gone global, but government legislation and taxation policies are not properly implemented along that line and it creates massive loop holes that multinational companies take advantage of,” Mr Ibrahim said.

A former Kenyan government official, John Githongo, called on governments around the world to take a stand and fight corruption.

“They say Africans are corrupt and thieves. All that Africa needs to do is to mobilise this public anger into something that will cause change in both the local and the national level,” he said.

Channels Television’s correspondent in London, Doris Okenwa, says the need to redefine the narratives and ideas around tackling corruption globally was highlighted at the meeting.

She says participants highlighted the need to be less hypocritical in tackling corruption, change tactics and institute more practical and workable policies. 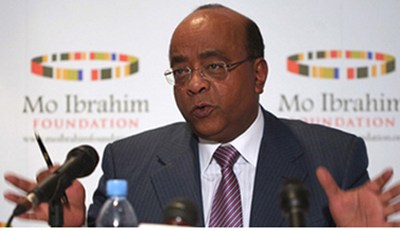 The good governance report also noted that over the past five years (between 2006 and 2010), Nigeria’s overall governance quality deteriorated.

However, despite initial fears over the security situation in the country, Nigeria retained 13th position among the 16 nations in West Africa, the same ranking she obtained in 2010. She also obtained the highest score in national security at 81 per cent out of a possible 100 marks.

The new development indicators were contained in the 2011 Index, which was released simultaneously in Dakar (Senegal), Johannesburg (South Africa), London (UK), and Nairobi (Kenya).

The Index of African Governance was launched by the Mo Ibrahim Foundation, an organisation that supports good governance and great leadership in Africa.

The Index provided full details of Nigeria’s performance across the four categories of governance as assessed by the Index: Safety & Rule of Law, Participation & Human Rights, Sustainable Economic Opportunity and Human Development.

However, Mauritius and Cape Verde continued their tug-of-war over the best ranked nation in Africa, in terms of good governance, with the former emerging first in the latest 2011 ranking, although Cape Verde came a close second.

Ghana was ranked first in West Africa and seventh in Africa. On the other hand, Somalia maintained its customary last (53rd) position in Africa, the same ranking the North African country has maintained for the past four years.

Established in 2007, the Ibrahim Index is the most comprehensive collection of quantitative data providing an annual assessment of governance performance in every African country.

A detailed analysis of Nigeria’s performance in the 2011 Ibrahim Index of African Governance showed that the country scored 41 (out of 100) for governance quality and was ranked 41st out of 53 countries.
Nigeria also scored lower than the regional average for West Africa, which was 51; and scored lower than the continental average which is 50. At sub-category level, Nigeria’s highest rank was in Rights and Education (26th) and lowest in Health (51st).

Commenting on the 2011 Index, Founder and Chair of the Foundation, Mo Ibrahim, said: “We have seen this year that Africa’s young majority are no longer willing to stand for the selective approach to governance adopted by many of our continent’s governments. Our young people are demanding a holistic, equitable and inclusive approach to the management of their countries.

“The Index findings echo these demands – achievements in economic management and human development, however striking, will not be realised if a democratic deficit persists. Africa’s success stories are delivering the whole range of the public goods and services that citizens have a right to expect and are forging a path that we hope more will follow.”

Countries that had consistently ranked in the top five for overall governance performance (Mauritius, Cape Verde, Botswana, Seychelles and South Africa) have, up to now, also performed highly in all four categories.

According to the foundation, Pires was awarded the prize because he had helped transform the tiny island country off the West African coast into a “model of democracy, stability and increased prosperity.”

Pires, 77, became the country’s prime minister in 1975 after playing a pivotal role in Cape Verdes’ struggle for independence from the Portuguese. In 2001, he was elected president, and went on to serve a two-term tenure which lasted a total of 10 years and ended in September. He stepped down voluntarily, despite suggestions from close associates to alter the constitution to enable him stand for re-election a third time.