A Federal High Court sitting in Abuja has dismissed an application filed by Mr Olisa Metuh seeking an end to the hearing of a suit against him in the court.

Mr Metuh, who is the National Publicity Secretary of the Peoples Democratic Party (PDP), had asked the court to disqualify itself from hearing a matter against him on grounds of bias by the presiding judge.

Abuse Of Court Process
He had alleged in his application that the presiding judge was a classmate of his, stressing that he knew him well and was therefore, ill-disposed to deliver justice on the matter.

In an earlier response to the allegation, Justice Okon Abang said that he did not know Mr Metuh and had not met him before now, a position that prompted the court to dismiss his application as an abuse of court process. 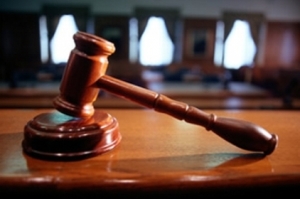 Giving his ruling on the application on Friday, Justice Abang held that there were no substantial facts or evidence given by the PDP spokesman in support of the allegation upon which the court would disqualify itself.

The court heard another application by Mr Metuh and the second defendant in the matter, Dastra Investment Limited, to suspend proceedings at the Federal High Court, pending the decision of a similar case at the Court of Appeal.

It also considered an application asking the court to return the file of the case to the chief judge for re-assignment, and an application that the matter be adjourned to enable the second defendant change the counsel representing them.

This followed a disassociation from the previous counsel, who is currently representing the first defendant, Olisah Metuh. 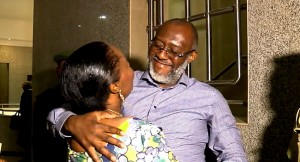 The EFCC had earlier filed a seven-count charge of criminal breach of trust, corruption and money laundering against the PDP National Publicity Secretary, but he was granted bail by a Federal High Court.

Sequel to his release, the anti-graft agency arraigned Mr Metuh on a two-count charge for criminal destruction of evidence and property of the Economic and Financial Crimes Commission (EFCC), but was granted bail by Justice Okon Abang who signed his release warrant. 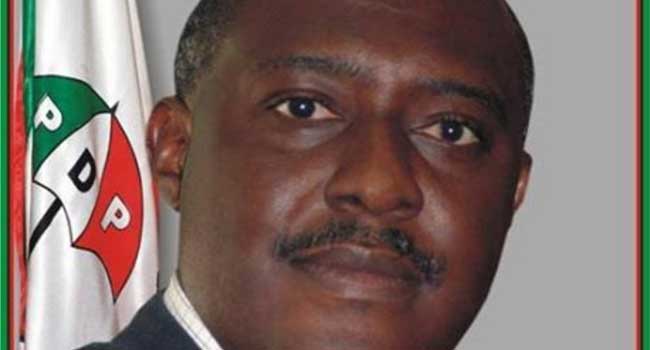 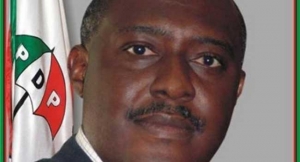 The National Publicity Secretary of the Peoples Democratic Party (PDP), Mr Olisa Metuh has filed an abuse of human rights suit against the EFCC.

Counsel to Metuh, Mr Ifedayo Fadipe told the Abuja high court that his client was being held illegally by the commission beyond the time stipulated by law.

He asked the court to compel the commission to either release his client on administrative bail or charge him to court as required by law.

In the meantime, the EFCC has insisted it has a valid court order to detain Mr Olisa Metuh.

Counsel to the EFCC , Mr. Rotimi Jacobs said that contrary to the insinuation that Metuh is being held unlawfully, the commission had obtained an order of a court in line with the administration of Criminal Justice Act, approving the detention of the politician pending the completion of investigation into the allegations against him.

Mr Metuh, according to the charges, transferred the sum of $1 million through his agent, Nneka Nicole Ararume, to one Sie Iyenome of Capital Field Investment committing an offense contrary to Section One of the Money Laundering Act.

He is also accused of receiving the sum of N400 million from the office of the former National Security Adviser, Col. Sambo Dasuki, without a contract contrary to the Money Laundering Act. 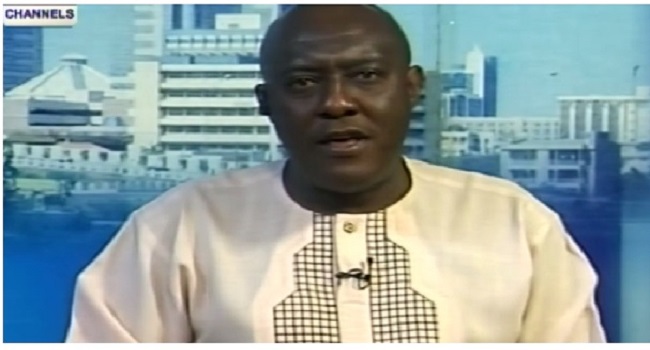 The Economic and Financial Crimes Commission (EFCC), says it has filed a seven count charge of criminal breach of trust, corruption and money laundering against the National Publicity Secretary of the People’s Democratic Party, Mr Olisa Metuh.

Mr Metuh, according to the charges, transferred the sum of $1 million dollars through his agent, Nneka Nicole Ararume, to one Sie Iyenome of Capital Field Investment committing an offense contrary to Section One of the Money Laundering Act.

He is also accused of receiving the sum of N400 million from the office of the former National Security Adviser, Col. Sambo Dasuki, without a contract contrary to the Money Laundering Act.

Listed as witnesses in the suit are five commercial banks, a representative in the Office of the National Security Adviser, three investment houses and eight individuals.

The EFCC has however not indicated when the PDP spokesman will be arraigned.

The EFCC also said it has a valid court order to detain Mr Metuh over alleged corruption related crime. 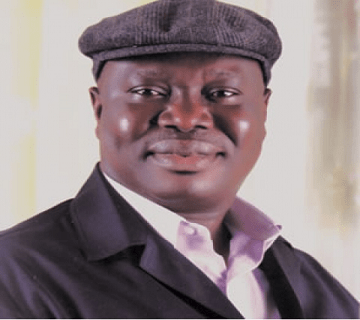 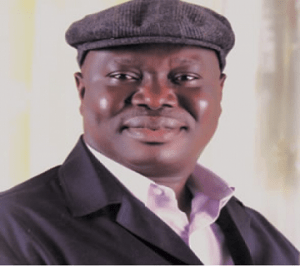 Barely a week after the Federal High Court Sitting in Lagos cleared the Speaker of the Lagos State House of Assembly, Adeyemi Ikuforiji, on charges of laundering over N500m, the Economic and Financial Crimes Commission (EFCC), has appealed the court’s verdict.

In a Notice of Appeal filed before the Lagos Division of the Court of Appeal, the EFCC wants the appellate court to set aside the decision of the trial judge, Justice Ibrahim Buba dated September 26, 2014.

The EFCC also want the upper court to order a trial ‘de novo’ (fresh trial) before another judge of the Federal High Court, Lagos other than Justice Buba.

No date has however, been fixed for the hearing of the appeal.

It would be recalled that Justice Buba had discharged Hon Ikuforiji and his Personal Assistant, Oyebode Atoyebi over allegations of laundering the money which belonged to the Lagos State House of Assembly.

Justice Buba, in a ruling on a “no case submission” filed by the Speaker and Atoyebi, held that the EFCC failed to prove any of the ingredients of the crime of money laundering.

The court also declared that the EFCC failed to establish a prima-facie case against the accused persons and that the suit was an abuse of court process.

Other Grounds Of Appeal

The commission also wants the upper court to hold that the Federal High Court, “Erred in law and came to a perverse decision when it held thus:

“On other constitutional issues, the prosecution has also not answered the submission referred to in this ruling. Consequently, the first and second accused be and are hereby discharged.

“The lower court erred in law, when it held that the provision of Section 1 of the Money Laundering (Prohibition) Act, 2004 and 2011 only applies to natural persons and corporate bodies other than government; like the office of the Speaker of the Lagos State House of Assembly.

“The lower court erred in law, when it held that one of the ingredient of offence contained in Section 1 of the Money Laundering (Prohibition) Act, 2004 and 2011 is that the appellant must prove that the money involved in the cash payment was derived from money laundering or drug or human trafficking, terrorism financing, bribery and corruption or other illicit or illegal dealings of crimes.

“The lower court erred in law when it held that the appellant by using the words, ‘accepting various cash payments amounting to without going through a financial institution’ in the counts at the lower court had placed an extra burden of proof on the appellant.

“The lower court erred in law when it held and concluded that the case of the prosecution witnesses supported the innocence of the respondent.

“The learned trial judge erred in law when he upheld the no case submission of the respondent and thereby occasioning a miscarriage of justice.

“The lower court erred in law when it held that prosecution first witness (PW1) testified that he knew nothing about the case.” 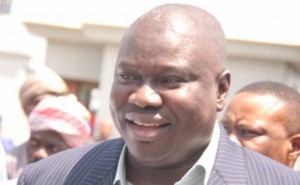 The Economic and Financial Crimes Commission, EFCC, has said it would appeal against the ruling of Justice Ibrahim Buba of the Federal High Court, Lagos, which on Friday set free the Speaker of the Lagos State House of Assembly, Adeniyi Ikuforiji and his aide, Oyebode Atoyebi.

Both had been standing trial on a 54-count charge of money laundering to the tune of N503million.

Justice Buba, on Friday, ruled that the prosecution failed to prove its case against the accused persons.

According to him, the trial was “anachronistic,” adding that the prosecution “misconstrued and misinterpreted the Money Laundering Act”.

Atoyebi’s counsel, Tunde Akinbisi, aligned his submissions with the arguments of Olanipekun.

Justice Buba upheld Olanipekun’s submissions and ruled that “the first and second defendants are hereby discharged and acquitted.”

However, the EFCC expressed dissatisfaction with the ruling.

“The learned judge erred in this ruling. The proof of evidence to the charge clearly showed that the provisions of the Money Laundering Act had been violated by the accused persons in receiving various cash payments from the Assembly amounting to about N338.8 million.”

The Commission stated that it would explore the option of appeal to bring the accused persons to justice.