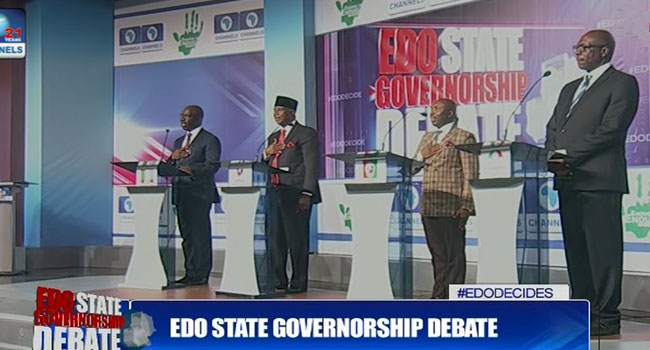 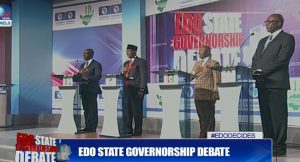 Candidates of four political parties contesting in the 2016 Edo State governorship election on Sunday took part in a debate organised by Channels Television in collaboration with Enough is Enough Nigeria.

The candidates, Mr Godwin Obaseki of the All Progressives Congress (APC), Osaro Onaiwu of the All Progressive Grand Alliance (APGA), Amos Areologbe of the Labour Party (LP) and Osagie Ize-Iyamu of the Peoples Democratic Party (PDP), took turns to answer questions from a group of panelists.

The four candidates answered questions bordering on security, economic growth and how to tackle unemployment among others.

Asked how he would transform the economy of the state, considering the reduced allocation coming from the Federation Account, the candidate of the APC said that he would uphold the blueprint that was already on ground and being implemented by the current government of the APC.

“The foundation has been laid already by the current government of Adams Oshiomhole and that foundation is what I will build on,” he stated.

The APC candidate also explained that if elected he would further ensure diversification of the economy, exploring other sectors, including agriculture and mining of mineral resources, which he believed would also create jobs.

Mr Obaseki, who had been in the banking and investment banking sectors, said he would empower the Agriculture research institutes in the state to further deepen the state’s involvement in agriculture.

On claims that he was imposed on the people of Edo State, he stated that talks that he would be controlled by the current governor was unfair, as he had been part of the Edo revolution since 2009.

“I have been part of the Edo project to renew Edo State which had been run down by the previous administration.

“Over the last seven and half years, the evidence is clear from what we have done – how we have rebuilt Edo State, how we have rebuilt infrastructure, rebuilt the educational system in the state and restored order, accountability and transparency on how government is run.

“To talk about a remote control in an administration where I and my colleagues designed a blueprint for Governor Oshiomhole is not being fair. I am not going to be remote controlled,” he stressed.

There is about 70 per cent unemployment level in the state and Mr Obaseki said that he would create more jobs for the unemployed through agriculture and other sectors which he would explore.

Security was another issue that the candidates were asked to speak on and Mr Obaseki said that “Edo State is one of Nigeria’s most secured states”.

He said that the current administration and the police had explored the use of technology in tracking kidnappers in order to check kidnapping in the state, which was on the increase some years back.

On his part, the candidate of the PDP, Mr Ize-Iyamu, said that his policies would focus on diversification of the state’s economy to increase output in agricultural produce, mining of solid minerals and building necessary infrastructures that would draw more foreign-direct investments.

“We need to diversify the economy of the state. There is too much dependence on allocation and it became even worse in the past seven to eight years.

“Agriculture is not funded by the present state government. Edo State was very good in tree crops.

“We have two research institutes here because of our experience in agriculture,” he stated.

He also claimed that there was corruption in the management of the state’s Internally Generated Revenue.


“If we ensure that government money does not go to private coffers, a lot more money can come. We must consider solid minerals, industries and even housing. Lagos State generates a lot of its wealth from its land.

“All we need to do is to invest in our land, create infrastructure and sell that land like a premium,” the PDP candidate further said.

He claimed that the present government had excelled in wealth consumption and not wealth creation.

Mr Ize-Iyamu accused the present government of using a very small amount from the security vote for security of the state, insisting that the funds were being embezzled.

“Security votes should not just be money for the governors to play with, it should be used for security reasons,” he insisted.

On his part, the candidate of APGA said he would add to his policies a “model that is working in Anambra State”, another state ruled by his party.

He dismissed claims that his party was a party of the Igbo ethnic group, saying that “they [his supporters] know that the model that I am bringing to the state is working in Anambra State”.

On his economic plan and the avenues he would explore to increase the state’s revenue, he said that if elected, his administration would look at getting more investors into the different sectors of the state’s economy, with focus on agriculture.

“The APGA model which is ongoing in Anambra State is working.

“We are exporting Ugwu (pumpkin) leaf and other vegetables in Anambra State. The State is producing rice as we speak. It is not about propaganda. The template is already in Anambra and it is working.

“Agro-economy is number one,” he emphasised.

Mr Areolegbe of the Labour Party said that he would reduce dependency on crude oil and shift attention to the creation of industries.

“We have what it takes in Edo State to generate revenue for ourselves.

“We will encourage inventors and innovators to create jobs for the unemployed,” he said.

He also reeled out the party’s policy in the agriculture sector, saying that the party would make the sector attractive for young persons to go into.

See entire videos of the debate below.