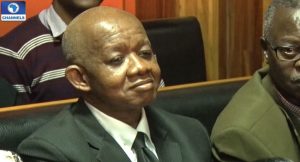 An Abuja High Court has criticised the prosecutor for the manner in which it is handling the case of Justice Adeniyi Ademola of the Federal High Court and two others.

The caution follows the resumed trial of Justice Ademola, his wife and a Senior Advocate of Nigeria, Mr Joe Agi, after two weeks of adjournment with the prosecution alleging that his witnesses were being harassed and that this might affect the case.

Justice Jude Okeke noted that the prosecutor, Mr Segun Jegede, needed to be serious with the way he was handling the case.

He also warned that if the prosecution failed to produce its witnesses at the next adjourned date, the court would be forced to do the needful.

Mr Jegede had told the court that one of his witnesses allegedly escaped an assassination attempt the night before and that the said witness said someone had called him to broker a meeting with the defendants.

He consequently asked the court to order an investigation and provide protection for his witnesses.

Opposing the submission, Counsel to Justice Ademola, Mr Oyeachi Ikpeazu, stated that the tales being told were aimed at instigating media trial which could prejudice the trial.

He explained that if any crime was perceived to have been committed, the right thing was to approach the security agencies to launch an investigation and file charges if anyone was found culpable rather than trying to whip public sentiments.

In a short ruling on Monday, Justice Okeke said that the prosecution had complained that his witnesses were being threatened, but did not say who was threatening them.

He said that since the case was in the purview of the Nigeria Police Force, the court would not interfere with its investigation.

The judge, however, ordered the Inspector General of Police to provide security and protection for all the parties and witnesses in the case, including the defence and prosecution to prevent interference with the smooth hearing of the case.

After the ruling, the prosecutor applied for an adjournment of the case till Wednesday to enable him prepare his witnesses.

Lawyers to the three defendants submitted that the prosecution should apply to withdraw the charge if it has no witnesses to prove his case.

They informed the court that the prosecution listed 14 witnesses out of which it has only called six.

The lawyers added that going by the allegation made by the prosecutor, only one of the witnesses was being threatened and as such, he should go ahead and present his other witnesses.

They stated that the delay in the trial was affecting the dispensation of the duty of Justice Ademola who is a serving judge and his wife who is the current Head of Service in Lagos State.

In his response, Justice Okeke agreed with the defence that “the application for adjournment is uncalled for, unreasonable and does not fall in line with the attitude of the present government or the administration of Criminal Justice Act”.

He, however, granted the adjournment for 24 hours instead of the two days as requested by the defence.

The court had earlier ruled that even though the prosecution did not provide a summary of what its witness from a commercial bank would say in regards to the financial statements of the defendants, the court would order the prosecution to attach the necessary documents required for the said witness to testify in the interest of justice. 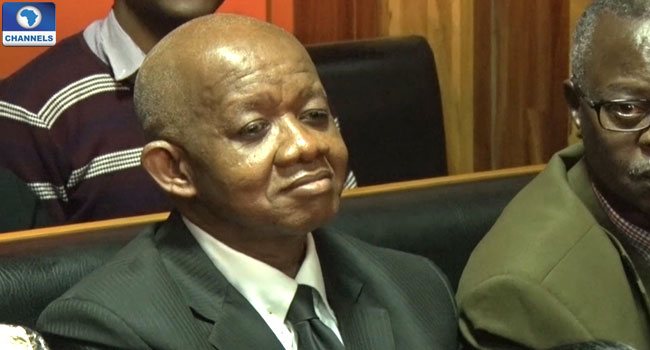 The trial of Justice Ademola, his wife and a Senior Advocate of Nigeria, Mr Joe Aginhas, has continued with the prosecution, alleging that his witnesses are being harassed; a situation he believes might affect the case.

The prosecution, Mr Segun Jegede, told the court that one of his witnesses allegedly escaped an assassination attempt the night before and that the said witness says someone had called him to broker a meeting with the defendants.

He therefore asked the court for witness protection because according to him, the witnesses are the property of the court.

Objecting to the statement, counsel to Justice Ademola, Mr Oyeachi Ikpeazu, said the tales being told were to continue to instigate media trial and prejudice the trial.

According to him, if any crime had been perceived to have occurred, the right thing would have been to approach the security agencies to launch an investigation and file charges if anyone was found culpable, rather than trying to court public sentiments.

He therefore urged the court not to listen to the prosecution.

Meanwhile, in a short ruling, Justice Jude Okeke said that the prosecution had complained that his witnesses were being threatened, but did not say who was threatening them.

Okeke further stated: “However, since he says the case is working the purview of the DPO of the Maitama Police station in Abuja, the court will not interfere with its investigation.”

He however added that for the sake of the trial, the Inspector General of Police is to provide security and protection for all the parties and witnesses in the case including the defense and prosecution to prevent any thing that would interfere with smooth hearing of the case.

Earlier, the court had ruled that even though the prosecution did not provide a summary of what its witness from a commercial bank will say, in regards to the financial statements of the defendants, in the interest of justice, the court will order the prosecution to attach the necessary documents required for the said witness to testify.

The defense counsels had urged the court to not allow the said witness testify in the case, since the prosecution did not comply with the law.

A Federal High Court in Abuja will on May 25 decide if it will vary the bail conditions handed down to the former National publicity Secretary of the Peoples Democratic Party, Mr Olisa Metuh, to enable him travel for medical treatment abroad.

At the hearing on Monday, Counsel to Mr Metuh, Mr Oyeachi Ikpeazu, made an application, praying the court to release his client’s international passport to enable him travel to the United Kingdom to treat himself of an undisclosed ailment.

Metuh is asking for five weeks to enable him take care of what he described as a back ailment sustained during his stint at the Kuje Prison.

Rejecting the application, however, the prosecution counsel, Mr Sylvanus Tahir, said even though the court had jurisdiction to grant the prayers of the defence, the prayers were not properly made.

According to him there was no specific request, asking the court to vary its earlier bail condition and “in the absent of that there is a doubt as to whether the court should make a contrary order”.

He also said that the medical report submitted before the court on behalf of the accused person was not certified, even though it was a public document which emanated from the national hospital.

The trial judge, Justice Okon Abang, after listening to both submissions adjourned to May, 25 to rule on whether or not to grant the application.

A Federal High Court in Abuja on January 15 has remanded the spokesman of the opposition PDP in prison following his ‘not guilty’ plea to a seven-count charge of corruption and money laundering.

Mr Metuh appeared in court, days after he was arrested by officials of the Economic and Financial Crimes Commission for the charges.