A former presidential candidate in Nigeria, Professor Pat Utomi, has stressed the need for the ‘problem of nationality’ in Nigeria to be addressed, in order for the country to progress. progress.

At a session held on Sunday, organised by a group called “the 150 Million Nigerians for Change”, Professor Utomi, expressed belief that the proposed national conference would address the issue.

“We know that something is wrong and any people who find a problem must look at how to solve these problems. And this thing is clear to any serious observer, that part of the Nigerian challenge and the reason Nigeria is not where it should be is that there is a problem of nationality which takes away some commitments to building the Nigerian nation,” he said.

Also at the meeting, organised to look at the challenges that the proposed national conference could solve, were other eminent Nigerians among whom are,  the leader of the Oodua Peoples Conference, Dr Fredrick Fasehun and a member of the Presidential Advisory committee on National Conference, Mr Tony Uranta.

Dr Fasehun said the proposed conference would create an opportunity to build national trust and define a glorious future for Nigerians.

Looking at the challenges the conference could also pose for the nation, he said: “We have always maintained that whoever brings this dream into reality will have his name written in gold. But the tricky part is how to manage this initiative.

He, however, lauded President Goodluck Jonathan for initiating the conference, saying “the president, through this initiative, has won himself a well-deserved place in history”. 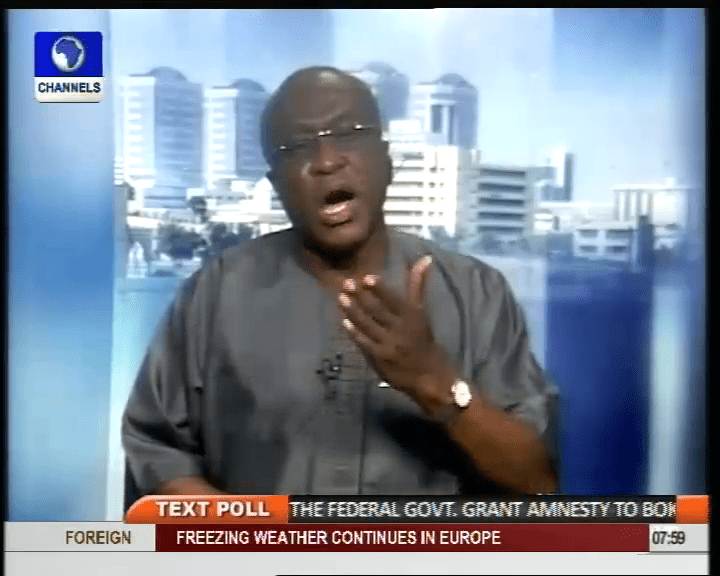 An overwhelming criticism was what greeted President Goodluck Jonathan’s proposal of a single term for elected officials shortly after his election in 2011.

A divergent reaction of standing ovation was what was recorded when a political scientist, Prof Isawah Elaigwu made a similar recommendation when he called for a single term of five years for all elected officials with the incumbents, not benefiting from the policy.

The professor made the call at the recent  Senate retreat on Constitution Amendment.

The newly appointed Senior Special Assistant to the President on Public Matters, Dr Doyin Okupe joins our panel of discussant which include Mr.Tony Uranta and Senator Magnus Abe to talk on the single term policy and other germane issues to be addressed ahead of the fourth amendment of the 1999 Constitution.