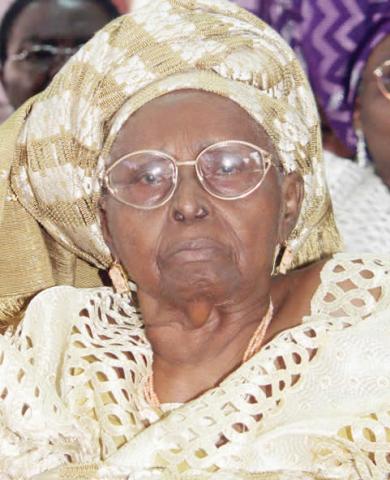 The Yoruba Unity Forum, led by the chairman and matriarch of the Awolowo dynasty, Mrs Hannah Idowu Dideolu (HID) Awolowo has accused the current political dispensation of marginalising the Yourba ethnic group and have now called on President Goodluck Jonathan to fix the situation.

At the general meeting of the forum, held at the Efunyela hall in Ikenne, Ogun state in south west Nigeria, Mrs Awolowo challenged traditional rulers and political leaders of Yoruba extraction, not to allow their personal interests to override the collective interest of the race in the quest to remain relevant in the socio-economic and political setting of the country.

The meeting aimed as another avenue towards forging a common ground to achieve the much needed peace and harmony among the Yorubas, was attended by major Yoruba leaders including the former deputy governor of Lagos and former governor of Ogun state, Mrs Kofoworola Bucknor Akerele, Mr Gbenga Daniel as well as traditional rulers from the ethnic group.

The former governor of the state, Gbenga Daniel while commending the steps being taken by Yoruba leaders towards ensuring unity of purpose among the Yorubas, charged them to take their destinies in their hands if the race is to remain relevant in the scheme of things in the country.

The highpoint of the general meeting was the ratification and adoption of the constitution of the forum which is expected to form the guiding principles of the forum towards achieving its aims and objectives.