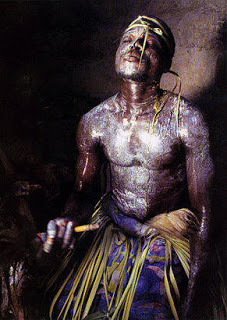 The Imo State police command has arrested a 64-year-old man, Mr. Chimezie Osigweh in whose property a 10-year-old embalmed corpse was found.

Mr. Osigweh, a retired principal and a strong devotee of the Guru Maharaji sect who was alleged to have mysteriously killed his mother 10 years ago, and kept the embalmed corpse of his mother in a large cupboard inside a shrine of a private room in a circumstance depicting ritual practice.

While parading the suspect at his temple in a village called Ezuru Umuagwu in Oguta Local Government Area of Imo State, the state Commissioner of Police, Mohammed Katsina, said preliminary investigations revealed that instead of burying the mother the normal way, Mr. Osigweh kept the embalmed body of Mrs. Lucy Osigweh in his temple for ritual purposes where he and other members of his sect used to hold secret nocturnal meetings to enhance their occultic powers.

Mr. Chimezie Osigweh was identified as a retired principal of Community Secondary School, Awa, and a strong member of the Guru Maharaji sect.

He was arrested alongside 2 other worshipers at his temple where he kept the embalmed corpse of his late Mother.

Mr. Osigweh who confessed to be a Guru Maharaji member for 24 years denied that he intentionally killed his mother. He, however, refused to disclose why he kept the mother’s embalmed corpse in the cupboard for 10 years saying it was not what he could openly disclose.

Meanwhile, villagers and family members have said that they suspected Mr. Osigweh of diabolical acts, stating that he had kept noticeable distance from everyone.

They disclosed that he was never married. His relatives who were at the scene of crime said when asked, he would tell lies that the mother travelled to the United States to see his siblings or that she was receiving treatment in the hospital.

The Imo state Police commissioner Mohammed Katsina while speaking to journalists said the Command has started making further investigations into the case and will ensure that they unravel every mystery behind it to the public as soon as they get more information.

In the meantime, the suspect will remain in the police custody and if found guilty, will be charged for first class murder.