Governor El-Rufai noted that with peace among Nigerians, the work load on security operatives would be reduced.

He made the call on Sunday at the 2017 Armed Forces Remembrance Day Celebration and Laying of Wreaths held at the Murtala Mohammed Square in Kaduna State, northwest Nigeria.

The governor, who observed that security operatives were making a lot of sacrifices for Nigeria, stressed the need for the citizens to ensure a peaceful society.

He assured the people of Kaduna State that as the Chief Security Officer of the state, he would carry out his responsibilities without fear or favour.

Governor El-Rufai said that the Remembrance Day celebration was a sad reminder of those who died for Nigeria, and also those who made selfless sacrifice for its people.

The Armed Forces Remembrance Day is an annual event to celebrate fallen heroes, as well as veterans who sacrificed their lives as they valiantly fought in and through the first and second world wars, the civil war, as well as peace support missions.

Prayers were offered for the soul of the departed heroes while Governor El-Rufai led dignitaries in the state to lay wreaths in honour of the fallen soldiers.

The high point of the event was the firing of 21 gun salute for the departed heroes and release of pigeons to signify peace. 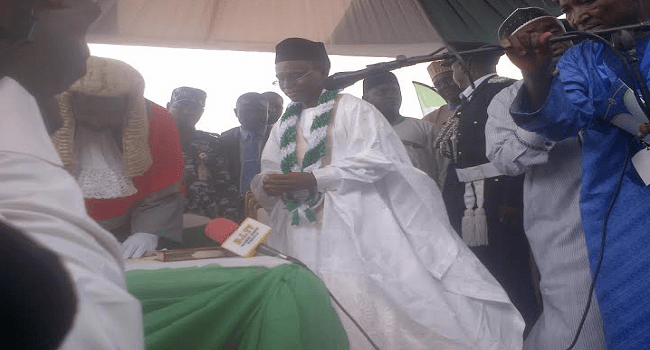 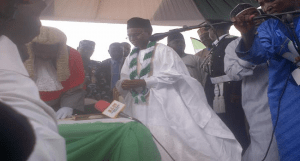 The former Minister of the Federal Capital Territory, Nasir El-Rufai was on Friday sworn in as the democratically elected Governor of Kaduna State.

Also sworn in was his deputy, Mr Barnabas Bantex.

The oath of office was administered to them by the Kaduna State Chief Judge, at the Murtala Mohammed square in the state capital.

First to take the oath of office was the Deputy Governor, Barnabas Bantex.

Thereafter, in the presence of dignitaries, the former minister placed his right hand on a Holy Quran, raised his hand and took the oath.

El-Rufai assumes the reins of power from outgoing governor, Muhktar Yero, having defeated the latter at the April 11 governorship election.

Speaking to an overwhelming crowd at Murtala Mohammed Square, venue of the event,  El-Rufai promised to govern the state according to the provisions of the Nigerian Constitution and in line with his campaign manifesto of making Kaduna great again.

He gave an assurance that despite the poor financial status of the state and dilapidated infrastructure of the state, he would fulfill his campaign promises to the people.

The new governor, while referencing some management failures of the outgoing administration, promised that he and his deputy would cut down their salaries as part of sacrifice to transform the state. 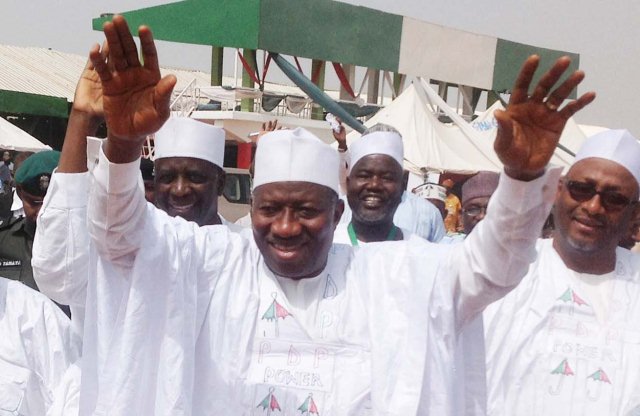 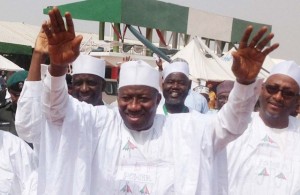 Nigerian President, Goodluck Jonathan, on Tuesday declared that his party, the People’s Democratic Party (PDP) would reclaim all the states it lost to the opposition, All Progressives Congress (APC) by 2015.

The President, who spoke at the North West zone sensitization and unity rally of the party in Kaduna, asked party members in the North West zone to shun those he referred to as inconsistent politicians and support the PDP as the only party that could deliver Nigeria, promote rule of law, unity and stability.

Addressing the mammoth crowd, President Jonathan described the governors and other elected leaders that left the party to join the APC as being unfair to the electorate that elected them. He called on the defecting members to return before it is too late.

The PDP National Chairman, Adamu Muazu, emphasised the need for members to be united in order to fight the opposition and reclaim the three states in the zone that were lost to APC. He also appealed for the support of the zone for President Jonathan’s re-election in 2015.

The Chairman of PDP Governors’ Forum, Godswill Akpabio, who led his colleagues to the rally, described the PDP as the bedrock of governance in the country. He assured the crowd that the party remained capable of providing the quality of leadership that Nigerians desire.

The rally, which held at the Murtala Mohammed Square, had in attendance, the Vice-President Namadi Sambo, National Assembly members,  state governors, party leaders and faithful, some of whom took turns to speak on how to move the party forward. 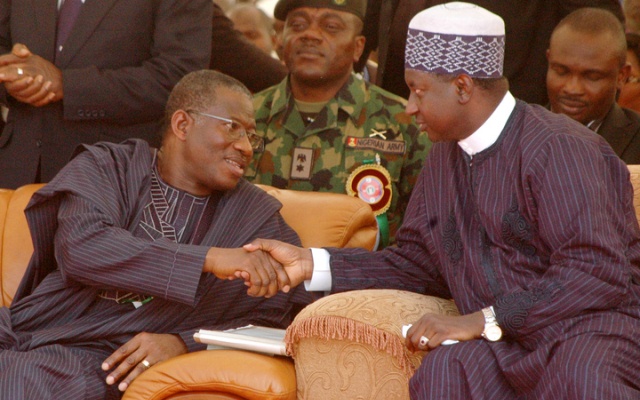 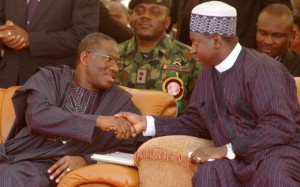 Security has been beefed up in Kaduna metropolis and environs, ahead of Tuesday’s Peoples Democratic Party (PDP) North West Zonal rally led by President Goodluck Jonathan.

The State Governor, Mukhtar Yero, who disclosed this to journalists after inspecting the level of preparation at the Murtala Mohammed Square, venue of the rally, gave assurance of a hitch free event as adequate security measures had been put in place ahead of the President’s visit.

The Governor, who inspected the venue in company of the PDP Zonal Chairman, Ibrahim Kazaure and the National Organising Secretary, Abubakar Mustapha, said that the rally would witness an unprecedented crowd in the party’s history since inception, describing the North West zone as the home of PDP.

The  venue of the rally was already  wearing a new look with  huge presence of security personnel combing the area ahead of the arrival of Dr Jonathan, his vice, Namadi Sambo, PDP governors and other PDP personalities that would grace the occasion.

Armed security operatives were already stationed at strategic places at the Murtala Mohammed Square, and other major roads and streets leading to the venue.

President Jonathan is expected to storm the rally with other top national leaders of the party and many state governors as part of efforts to ensure cohesion within the party in preparation for the 2015 general elections.