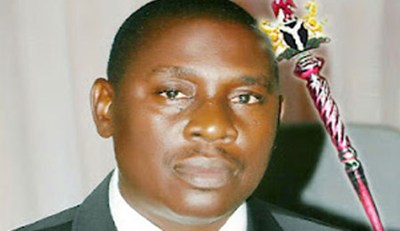 The Speaker of the Bayelsa State House of Assembly, Mr. Kombowei Benson, has refunded N19.5m to the state treasury out of N78m the House collected from the Governor of the state, Mr. Seriake Dickson, to sponsor members to the 43rd Commonwealth Parliamentary Association in South Africa.


The Speaker also admitted that the Anti-Fraud Unit of the police and the Economic and Financial Crimes Commission were on his neck over the N78m South African trip scandal rocking the state House of Assembly.

Benson spoke in Yenagoa on Friday through his spokesman, Mr. Piriye Jonathan, during a two-day Capacity Training for Journalists organised by the Federated Correspondent Chapel of the Nigerian Union of Journalists. He said the police stormed the House and grilled the lawmakers on the alleged fraud. But the speaker said he refunded part of the money on August 3, about one month after the programme.

Our correspondent gathered that the speaker took the option of returning part of the money after the matter leaked to members of the public.

The speaker and 23 other members of the House have been battling with an allegation that they frittered N78m belonging to the state on the pretence that they attended a conference in South Africa.

The allegation was first made public through a petition addressed to the Inspector-General of Police, Mohammed Abubakar, by a civil society group, Transparency and Good Governance Coalition.

Benson and other lawmakers were said to have written to the governor demanding N78m to enable them attend the 43rd Commonwealth Parliamentary Association in South Africa which was held from June 29 to July 8.

Having received the request dated May 7, Dickson was said to have approved the money on June 28 on condition that it must be used for the conference.

But Benson who admitted that the police had commenced probe on the matter was silent over the allegations that he failed to honour the invitation of the EFCC.

Our correspondent found that EFCC through a letter dated August 6 invited the speaker to its office in Abuja for questioning.

The letter which was signed by the commission’s Head, Economic Governance, Olufunke Adetayo, requested the speaker to be at EFCC’s office on August 13. A copy of the letter was obtained by our correspondent in Yenagoa.

EFCC in the letter which was addressed to the Speaker said, “This Commission is investigating a case of conspiracy, abuse of office and diversion of public funds in which the need to obtain clarification from you becomes imperative.

“In view of the above, you are kindly requested for interview by the undersigned through Mr. Obioha Okorie on 13th August, 2012 at Block C, No 5 Fomella Street, Off Ademola Adetokunbo Crescent, Wuse 2, Abuja by 10 am prompt.

“This request is in pursuant to section 38 Sub 1 and 2 of the Economic and Financial Crimes Commission (Establishment) Act 2004″.

But our correspondent learnt that Benson had been playing hide and seek with the commission, refusing to honour the invitation.

It was learnt that after receiving the letter, Benson wrote to the commission begging that the date should be shifted to August 20. The speaker was said to have reneged in his promise to appearing before the commission on August 20.

Benson, however, said he was willing to be investigated, adding that the allegation that members diverted the money earmarked for the conference was untrue.

“We attended the conference,” he said but admitted that the lawmakers only met the closing ceremony of the conference owing to visa problems.