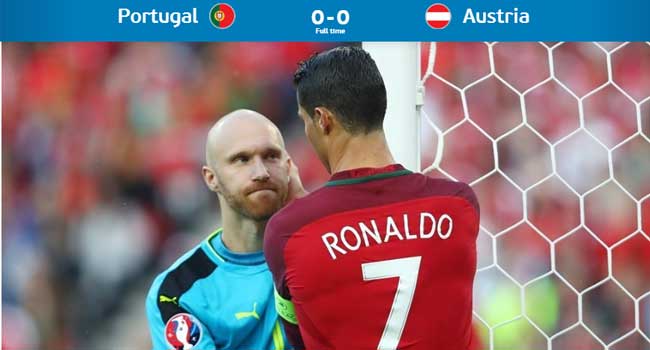 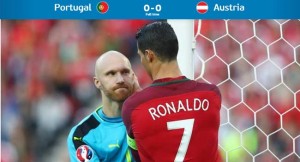 Cristiano Ronaldo missed a 79th minute penalty against Austria as Portugal failed to score for the second game running at the Euro 2016.

The night had started well for Portugal as they created several chances but frustration set with Austria resolute in defending and the Portuguese had to endure miss upon miss.

Cristiano Ronaldo repeatedly tormented Austria’s goal but despite all his efforts on target he could not find a way past goalkeeper Robert Almer.

Portugal remained the dominant side and nearly reaped their reward just before the half-hour, only for Nani’s header from Andre Gomes’ cross to crash back off the post with Joao Moutinho drilling the rebound over.

In the 77th minute, Martin Hinteregger brought down Cristiano Ronaldo in the Austrian box and the Madrid star stepped up to take the resultant penalty. Unbelievably he hit the post.

It was a crucial miss and Austria seemed to suddenly find some attacking belief and Portugal had to struggled to survive nervy moments in the closing minutes.

In spite of the scare though, Ronaldo still managed to put the ball in the net off a free kick in the 84th minute and thought he had saved the day, only for the goal to be correctly ruled out after Cristiano strayed offside.

Portugal missed the opportunity to go top of Group F. They remain third while Austria stay bottom heading into the final round of fixtures on Wednesday afternoon. 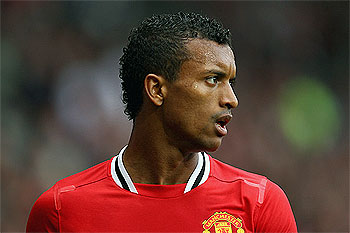 Russian Club Zenit St Petersburg has decided to bid for Manchester United winger Nani with a bid of £25 million.

With the Russian transfer window closing Thursday, the Russian club is desperate to have the winger in their kitty this season to be amongst the few big names that have been signed on to the club.

Zenit are also in hot pursuit of to their Joao Moutinho making him the second top target the club is after.

Zenit is filled with so much winning power ahead of the new season as it went on spending spree with the signing of Hulk and Axel Witsel for a combined €80 million, and the club has made known its desire to continue the spending if that will be the solution to get Nani out of Old Trafford and join the club.

The Portugal international has not been having the best of time at Old Trafford talking of playing time due to his poor display against Everton during an EPL game this season as he was later subbed in the game and was not billed to play the next game of Manchester United.

In a quick move, Manchester United acquired Shinji Kagawa who plays the midfield means automatic placement is not sure for Nani and to say the new signing has settled in quickly at the club, this recent move to Russia might be an option that will quite hard for Nani to reject Russia and joining country man Moutinho will also be a thing of joy for the player.