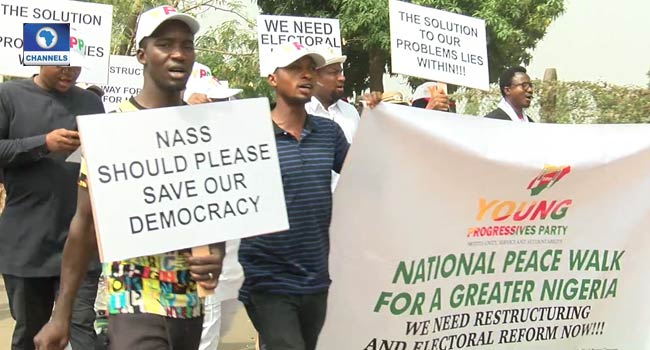 Members of the Young Progressives Party (YPP) on Wednesday protested in front of the National Assembly demanding a restructuring of the nation’s security architecture.

Led by its national chairman, Bishop Amakiri the party members also called on the leadership of the National Assembly to ensure electoral reforms that will restore the confidence of the electorate in the nation’s electoral system.

Amakiri while speaking with journalists during the protest appealed to the Peoples Democratic Party (PDP) and the All Progressives Congress (APC) to desist from overheating the polity.

“We also believe that the electoral reform is necessary, there’s no any other time than now,” Amakiri said.

He noted that it is unfortunate for the courts to decide elections after the citizens have made their choice.

The YPP members later submitted their petition to representatives of NASS who received them in front of the National Assembly.