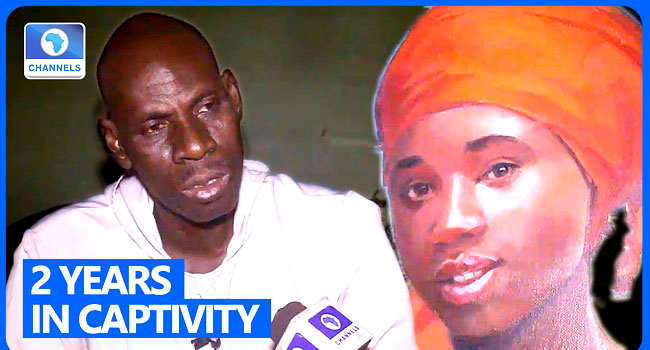 The father of Leah Sharibu, Nathan, has criticised the Nigerian government for the continued ordeal of his daughter in captivity of the insurgents.

Leah is the only Dapchi girl left in the custody of the factional Boko Haram group – Islamic State West Africa Province (ISWAP), since her abduction in February 2018.

“It is due to their lapses that my daughter is spending two years in captivity, and there is no assurance up till now,” Nathan told Channels Television in an exclusive interview on Tuesday.

The insurgents had stormed the Government Girls Secondary School in Dapchi, Yobe State and abducted Leah and about 100 other girls on February 19, 2018.

Weeks after the abduction, the other girls were released while Leah was kept in captivity for refusing to renounce her Christian faith.

Amid calls for her release by various groups and individuals, an audio clip emerged in August 2018 in which the abducted schoolgirl pleaded with President Muhammadu Buhari to help her regain freedom.

In commemoration of her two years in captivity, emotional Nathan pleaded with the President to fulfil his promise of ensuring that Leah regained her freedom.

He said, “I have a special message for him. Mr Buhari, who is the Nigerian President, is a father and he is a grandfather; his administration has assured us – the family – that they would do their possible best to ensure that my daughter is released.”

“He also promised the nation and almost promised the whole world that his administration will do its possible best to ensure that those in captivity are released.

“So, I’m pleading with him now to fulfil his promise; I’m begging him,”

According to Leah’s father, the abduction of his daughter has been a major concern for members of the family in the last two years.

He added that the health condition of the girl’s mother has been unstable, stressing that she goes to the hospital almost every week.

Nathan was worried that the government has yet to make any contact with him since 2018, although he noted that they once received a delegation sent by the President.

He thanked the international community for their efforts so far and asked them to pressure the Nigerian government to secure his daughter’s release.

“Personally, the Federal Government has not contacted me, except in October 2018 when the Minister for Information and Culture and other two ministers came to my house in Dapchi, to represent the President himself to condole with us and assured that the administration is doing its possible best to ensure that my daughter returns home safely.

“Since then, I did not hear anything from them up till this time; no result at all. I am 100 per cent assured that my daughter is still alive and one day, she will come home safely,” an optimistic Nathan said.