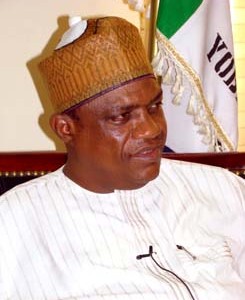 The Yobe state governor Alhaji Ibrahim Gaidam has attributed mass failure in the Senior School Certificates of Education (SSCE) and the National Examination Council (NECO) in the state to poor management of secondary education.

Speaking to newsmen after unscheduled visit to the Government Girls College (GGC) Damaturu under renovation, the governor expressed sadness with the dilapidated structures he saw and ordered for immediate estimates that will improve the situation.

The governor wonders how students under such condition can do well in final examination, and directed that the ministry of education be split into upper and lower for better management.

“Year in year out, we keep having 10 or 15 per cent in the SSCE and the NECO. We will not tolerate that any longer. The knowledge gap between the children of the rich and that of the poor must be bridged, that is my vow during my electioneering campaign” Gaidam laments

Alhaji Ibrahim Gaidam, also addressd the students and encouraged them to read hard as his administration will do everything possible to encourage learning in the state.

The governor also tasted the lunch prepared for the students and directed that the quality be improved and thereafter ordered that three bulls should henceforth be provided to the school on weekly basis to improve their feeding.

Declares State of Emergency On Hospital

Meanwhile at specialist hospital in Damaturu, Governor Gaidam declared state of emergency in the hospital and expressed sadness with the sanitary conditions of the hospital.

“I am highly embarrassed and disappointed with the way this hospital is being managed. It is really unfortunate that those at the helm of affairs are altering all the health policy of the present administration and I will not tolerate that” Gaidam said.

He said measures must be taken both at the specialists’ hospital and the 200 bed capacity hospital due for equipping within the year so that the health sector in the state will compete with any other in the country.

While querying the health manager for the lapses, governor Gaidam says the hospital will be renovated as soon as possible, while managers that will actualise government’s health care reform will be appointed to take charge.

He also expressed sadness that despite the huge investment in the sector, the conditions in all the wards are still deteriorating and vowed to take urgent steps that will give the people of the state the best health care services ever.

Governor Gaidam had during his 2011 campaign assures people of the state that health sector under his administration will stand out nationally if elected. 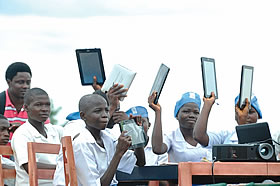 The government of Osun state on Tuesday commenced the distribution of free computer tablets otherwise known as ‘Opon Imo’ (tablet of knowledge) to students in the state’s Senior Secondary Schools.

The distribution kicked off at Ataoja School of Science in Osogbo, the state capital, where about 387 students in SS 2  were given the mobile device.

The tablet with its technology enhanced learning platform  is expected to complement efforts of the teachers and students for better performance in learning and teaching.

Speaking to Channels Television, elated students and teachers admitted that the Opon Imo will go a long way in preparing the students for external examinations.

The government has said the learning device would be given to students in SS 1 to SS 3 in all its secondary schools.