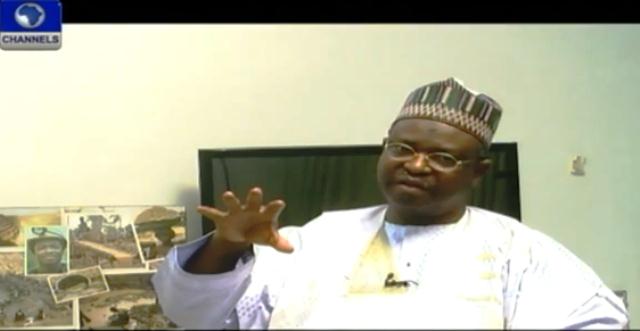 The former Speaker of the House of Representatives, Mister Ghali Na’Abba has challenged those claiming that President Goodluck Jonathan signed an agreement to restrict himself to a single term to come out with proofs to back up their claims.

Speaking on Channels Television programme, ‘’View From The Top’’, Mr Na’Abba said that although it is important for people to honour agreements they entered into, he was not privy to any document suggesting that there is any agreement.

He said: “Anybody has the right to contest to be the President of Nigeria, wherever he comes from, but when there is an agreement, that agreement must be upheld, no matter the pain. If we don’t learn to honour our agreements, then we are not men of honour.

“In this case, none of us have been briefed after the primary elections of 2011 by anybody about the process these governors followed in giving their votes or asking their delegates to elect Goodluck Jonathan to be the party’s presidential flag bearer.”

Na’Abba was among many top politicians that left the People’s Democratic Party, PDP, in a highly publicized defection to the Action Congress of Nigeria, ACN, in 2005. He said that unlike the current wave of defections, his was not an easy decision, leaving the PDP back then.

He explained that the then President, Olusegun Obasanjo, in his bid to elongate his tenure in office, “embarked on what they called re-registration exercise in the party”, with the aim of “having total control of the party.”

He further alleged that those of them who were seen not to be in support of the president’s plan “were marked out for total elimination from the party.” So, means had to be devised for them to either leave the party or be dismissed. He said that they were denied the opportunity to be re-registered as members of the party.

Hence, they opted out of the party and fought the scheme. He noted that they did not leave the party just because they wanted to.

He, however, regretted that his expectation that whatever party he joined after PDP would be a truly democratic party with internal democracy was not what he found, so he decided to return to his party, the PDP, in 2007, just after the presidential election.

Speaking from experience as a one-time defector, Na’Abba noted that the possibility of recent PDP defectors returning to the party would depend on their objectives, as there were people in politics for the purpose of acquiring power, while there are also developmental politicians.

“Once power seeking politicians find what they need, they may not come back, because for them all the platforms are the same. There are no differences in ideology; which is why many politicians contesting for positions cannot provide their party manifestos,” he explained.

Mr Na’Abba also commended the current Speaker of the House of Representatives, Aminu Tambuwal, saying despite the circumstances that he has found himself, he is doing his best.

“The current House of Representatives cannot be compared to that of 1999 to 2003.  Because that time, members came almost on their own, so they didn’t need anybody to direct them, and this was why the House was quite independent.

“After 2003, when the potential for the House to do a lot of things was realised by the executive arm, it was silently decided that that degree of independence should never be allowed within the legislature. So the next occupants of the House and the Senate were mostly handpicked by the party or the President.”

He also shared his views on the National Conference and other matters of national importance.