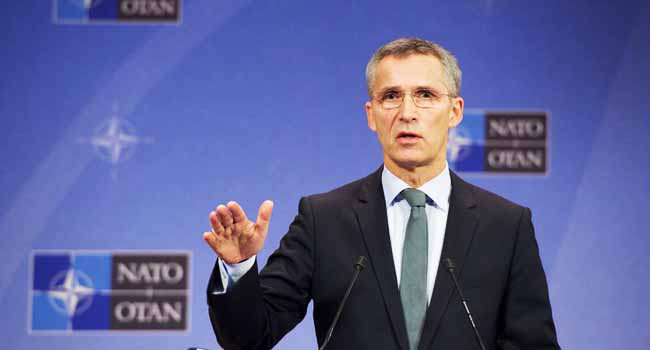 The head of NATO apologised Friday over a training exercise in Norway after Turkish President Recep Tayyip Erdogan withdrew troops in protest at an incident he deemed offensive.

Erdogan said he had ordered the 40 troops to be removed from the exercise – a desktop drill not involving boots on the ground – after an image of the founder of modern Turkey, Mustafa Kemal Ataturk, and his own name were included as “targets”.

NATO Secretary General Jens Stoltenberg, a former Norwegian prime minister, apologised for upsetting Turkey, a key member of the alliance but one which has caused disquiet recently with its increasingly close relations with Russia.

“I apologise for the offense that has been caused. The incidents were the result of an individual’s actions and do not reflect the views of NATO,” Stoltenberg said in a statement.

“Turkey is a valued NATO ally, which makes important contributions to allied security.”

The Trident Javelin exercise in Stavanger, southern Norway, is described on a NATO website as a “computer assisted exercise without troops on the ground”, aimed at improving command structures for big operations.

The decision by Ankara, a NATO member since 1952, to buy the S-400 air defence system from Russia caused concern among its Western allies, but Turkey remains an important and active member of the alliance. 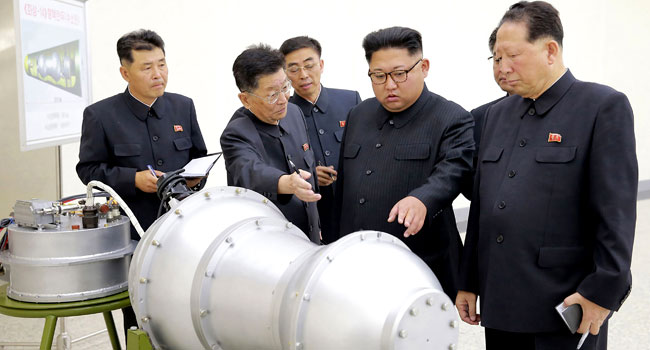 “North Korea’s missile launch is another reckless breach of UN resolutions — a major threat to international peace and security which demands a global response,” he said in a tweet.

The launch earlier Friday of a ballistic missile over Japan came after the United Nations Security Council imposed an eighth set of measures on the isolated country following its sixth nuclear test earlier this month. 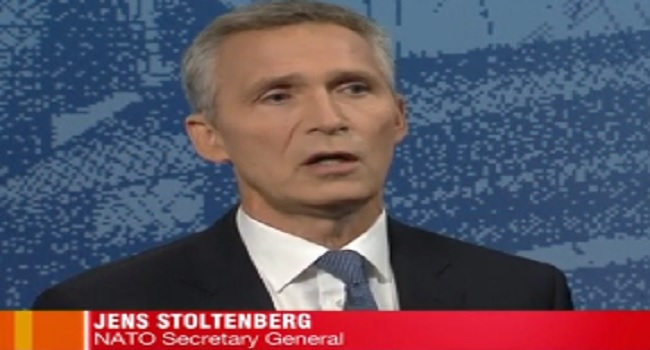 North Korea’s “reckless behaviour” is a global threat and requires a global response, the head of the NATO military alliance said on Sunday

Asked in an interview with BBC television, whether an attack on the U.S. Pacific territory of Guam would trigger NATO’s Article 5, which requires each member of the alliance to come to the defence of any other, NATO head Jens Stoltenberg said he would not speculate about whether it will be applied in such a situation.

NATO has not been directly involved in the crisis, which saw Pyongyang carry out its sixth and most powerful nuclear test a week ago, but has repeatedly called on North Korea to abandon its nuclear and ballistic missile programmes.

British defence minister Michael Fallon also told the BBC he was very concerned about the situation and said the military conflict should be avoided at all costs.

The United States and its allies had been bracing for another long-range missile launch in time for the 69th anniversary of North Korea’s founding on Saturday, but no fresh events were spotted while the North held numerous events to mark the holiday. 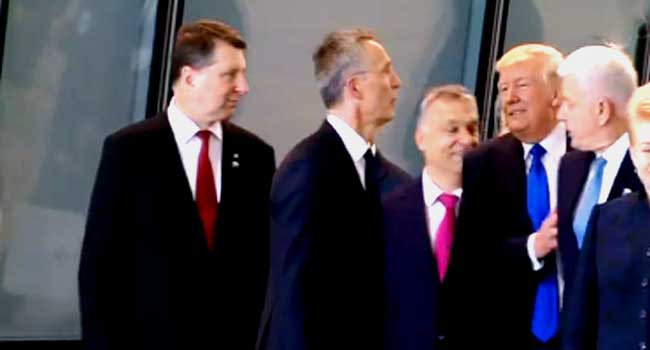 United States President Donald Trump pushes his way to the front of the world stage in Brussels on Thursday, shoving aside the leader of the soon-to-be member Montenegro at a NATO summit.

Video showing the leaders caught Trump pushing his way past Prime Minister Dusko Markovic, then confidently adjusting his suit as he emerged in the front of the group, closer to NATO head Jens Stoltenberg.

Video of the incident went viral and came as Trump delivered a tough message to NATO allies to dramatically increase their defence spending to ease financial burden to the United States.

The NATO mission of Montenegro, which is joining the Western military alliance against stiff opposition from Russia, did not immediately respond to a request for comment. 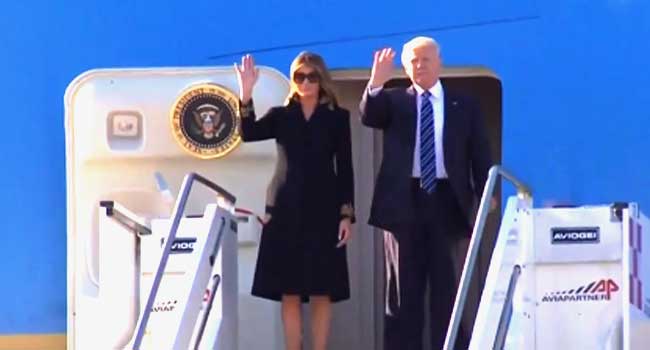 Trump will later attend a summit of NATO leaders at the military alliance’s headquarters in the city.

The U.S. president, who is on the fourth leg of his first foreign trip since taking office, was greeted by Tusk, a former Polish prime minister who chairs meetings of the 28 EU leaders.

Trump, who voiced skepticism while campaigning about the EU’s value and hailed Britain’s Brexit vote to quit the bloc, will hear a call from European leaders for him to maintain Washington’s longstanding support for integration on the continent, as well to support free trade and efforts to combat climate change. 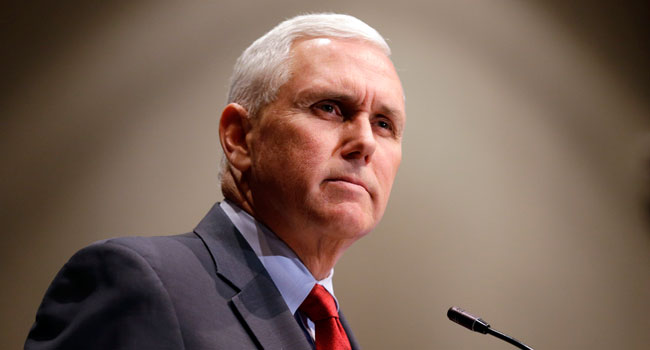 The United States Vice President, Mike Pence, has continued to reiterate President Donald Trump’s message to leaders in Europe, telling them that he expects allies to make ‘real progress’ by the end of the year, towards a NATO pledge to spend more on defence.

Speaking at the NATO headquarters in Brussels, Mr Pence said that although some NATO members respected their commitment to reach two per cent of Gross Domestic Product on defence spending, others failed to do so.

NATO allies had agreed during their summit in 2014, to reverse years of military cuts, and meet a goal to spend two per cent of economic output on defence by 2024.

The steps were taken after Russia annexed Ukraine’s Crimea Peninsula, and Islamist attacks in Europe.

However, of European NATO countries, only Britain, Greece, Estonia and Poland have reached the target. 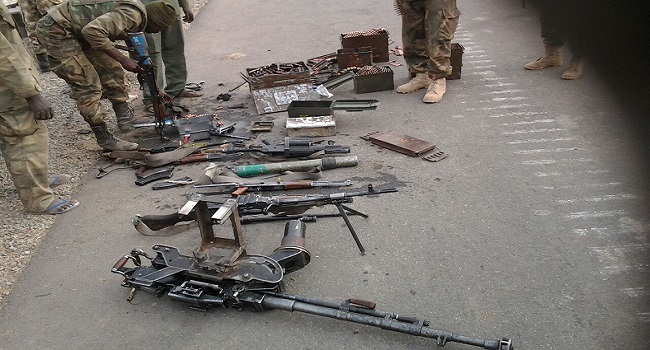 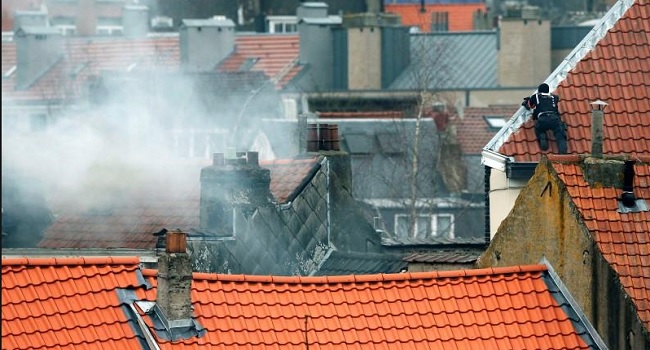 Prime Minister Charles Michel summoned security and intelligence chiefs for an emergency sitting of Belgium’s national security council on Wednesday after an armed suspect was shot dead following a raid linked to the Paris attacks.

One Belgian private broadcaster, VTM, said two further suspects had been detained but there was no confirmation.

Brussels police killed the unidentified person who had an assault rifle after four officers were wounded on Tuesday during what investigators had expected to be a routine search on an apartment in the south of the Belgian capital.

“The threat remains,” Michel said, adding that Belgium would review its level of alertness and consider possible extra measures during the day.

Brussels, headquarters of the European Union as well as Western military alliance NATO, was entirely locked down for days shortly after the Nov. 13 Paris attacks for fear of a major incident there. Several of those involved in the Islamic State shootings and suicide bombings were based in the city.

Brussels has maintained a high state of security alert since then, with military patrols a regular sight. 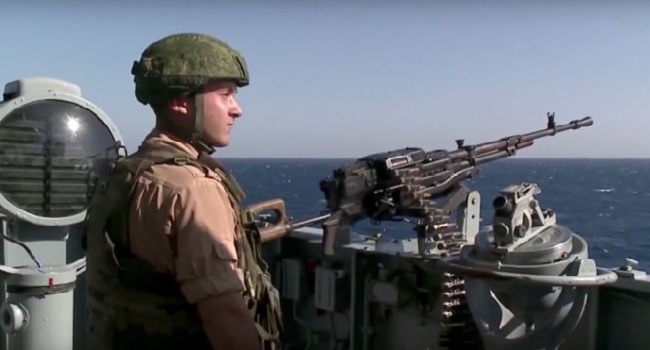 As the Russia-Turkey row intensifies, Moscow has strengthened its anti-aircraft defences in Syria by moving a cruiser towards the coast and deploying new missiles at its main base.

The Moskva cruiser’s long-range air defence system will provide cover for Russian aircraft as well as the s-400 missiles which arrived on Thursday.

Meanwhile, the row over Turkey’s downing of a Russian combat jet on Tuesday rages on.

Turkish President, Recep Tayyip Erdogan, had warned Russia not to ‘play with fire’ with its operations in Syria.

In return, Russia suspended its visa-free arrangement with Turkey and is planning to introduce a wide range of economic sanctions. President Vladimir Putin, however, said that he wants an apology from Turkey before he would speak to Mr Erdogan.

A senior Russian commander said the jet had been ‘ambushed’ by two Turkish F-16s patrolling the area for more than an hour beforehand.

He said Russian and Syrian radar data proved that a Turkish jet had fired a missile from 2km (1.2 miles) inside Syria. Turkey did not respond to the allegation.

Turkey, which is a member of Nato and of a US-led coalition in the region, insists Mr Assad must step down before any political solution to the Syrian conflict is found.

Both countries said that they are trying to rid the region of the Islamic State (ISIS) group, which claimed the recent attacks on Paris and also on a Russian airliner. 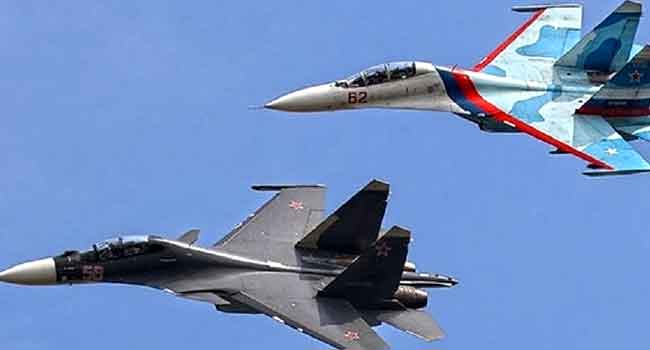 NATO has disputed the claim by the Russian government that one of its planes entered into Turkish airspace by mistake.

According to NATO Secretary-General, Jens Stoltenberg, Russia’s reason was not explanatory enough for the violation of Turkish airspace.

The Russian government had explained that the incident was due to bad weather, stating that its plane did not know when it entered into turkey, claiming it was an honest mistake.

Russia has been conducting airstrikes in Syria, claiming to be targeted at the Islamic State militants there.

Rights groups have denied this, noting that the strikes were targeted at the opposition rebel groups in Syria, thereby helping the government of President Bashar Al-Assad.

The US and other western countries are also suspecting that Russia is indeed helping the Syrian government and have called for an end to the airstrikes. 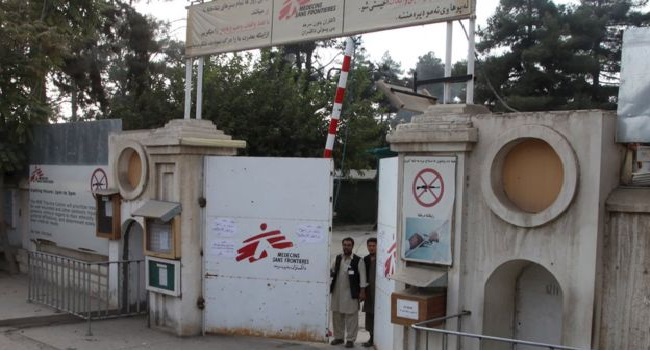 The Medical Charity, Medecine San Frontieres (MSF),  has condemned “in the strongest possible terms” deadly air strikes on its hospital in the Afghan city of Kunduz.

MSF said that air strikes which lasted for over 30 minutes were launched on its hospital in Kunduz.

US forces were carrying out air strikes at the time. The NATO alliance had admitted the clinic may have been hit.

At least 37 people were seriously injured, 19 of them were MSF staff.

More than 100 patients were in the hospital, along with relatives and carers; it is not known how many of them were killed.

MSF said that all parties to the conflict, including Kabul and Washington, had been told the precise GPS co-ordinates of the hospital in Kunduz on many occasions, including on September 29.

After staff at the hospital became aware of the aerial bombardment in the early hours of Saturday morning, US and Afghan military officials were again informed, MSF said.

A spokesman for US forces in Afghanistan, Col Brian Tribus, said: “US forces conducted an air strike in Kunduz city at 02:15 against individuals threatening the force.

“The strike may have resulted in collateral damage to a nearby medical facility.”

“The incident is being investigated, he added.

The Afghan Interior Ministry said that a group of 10 to 15 militants were found hiding in the hospital. The Taliban denied that any of its fighters were there.

“They were killed, all of the terrorists were killed, but we also lost doctors,” Ministry spokesman, Sediq Sediqi said.

Head of the United Nations Mission in Afghanistan, Nicholas Haysom, said “hospitals accommodating patients and medical personnel may never be the object of attack” and commended the work of MSF.

The International Committee of the Red Cross (ICRC) also strongly condemned the bombing.

Head of the ICRC delegation in Afghanistan, Jean-Nicolas Marti, said, “Such attacks against health workers and facilities undermine the capacity of humanitarian organisations to assist the Afghan people at a time when they most urgently need it” . 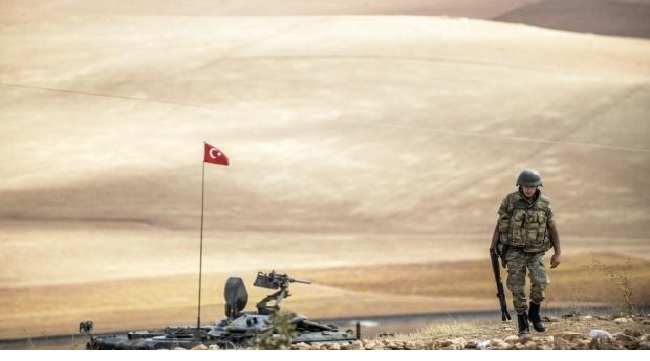 Ambassadors from 28 Nato countries are holding an emergency meeting in Brussels to discuss Turkey’s military campaign against the Islamic State and Kurdish militants.

Turkey was a reluctant partner in the U.S. coalition against ISIS, but over the past few days, it had bombed ISIS and Kurdish positions.

Turkey is also backing plans for a buffer zone on the border with Syria.

Prime Minister, Ahmet Davutoglu, said that he expected his country’s allies to show solidarity and support for its campaign.

The U.S. and Turkey are working together on plans to create an “ISIS-free zone” along the border with Syria.

Meanwhile, Turkish police have continued to arrest suspected members of  the ISIS, PKK and leftist groups.

They have, however, arrested more than 1,000 suspects  over the past week.