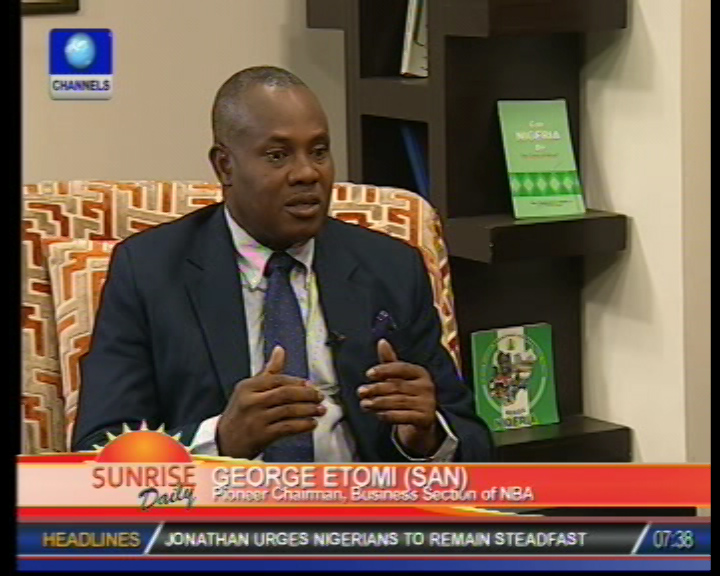 A legal practitioner and the pioneer Chairman, Business section of the Nigerian Bar Association (NBA), George Etomi on Tuesday said that there are several improvements to make Nigerians celebrate the 52 years Independence from colonial power.

Speaking as a guest on Channels Television’s breakfast programme, Sunrise Daily, Mr Etomi said the one significant area that has experienced improvement is the electoral process.

“The person at the helm of affairs matters a lot. If you have a president or a governor who decides that the electioneering system does not matter, then people would burn, loot, and generally cause mayhem. But if you have a president such as we have, who is not prepared to stick out his neck for anybody but ensures that the system works, then you will have results,” he said.

Watch the video below for the complete interview. 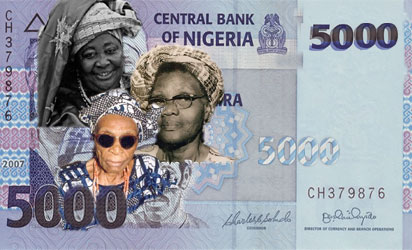 Reeling from a barrage of public anger, disagreement and threats, the Central Bank of Nigeria (CBN) has buckled under pressure and suspended the planned introduction of the N5000 note following a directive from the presidency.

This is coming after the presidency through the Special Adviser to the president on Media and Publicity, Reuben Abati, on Thursday declared that President Goodluck Jonathan has ordered that the planned introduction of N5,000 be put on hold.

The Nigeria Bar Association (NBA) had also on Thursday, called for the immediate sack of the governor of the CBN, Mallam Sanusi Lamido Sanusi over the planned introduction.

Announcing the change in policy, a statement by the director of corporate communications of the apex bank, Mr Ugochukwu Okoroafor however explained that “it is indeed within the powers of the bank to print new currencies as provided in Section 19(1) of the CBN Act 2007.”

The statement further explained that “It also provides that such introduction of the Naira denominations shall be approved by the president upon recommendation of the board.”

“In line with this provision, the CBN had  proposed and obtained the approval of the President, Dr. Goodluck Jonathan to embark on the currency restructuring exercise, codenamed ‘Project Cure’ on December 19, 2011”

“The CBN hereby informs the general public that the president, on Thursday, September 20, 2012, directed that further action on the approved restructuring exercise be stopped.”

“In full compliance with the provisions of the law, the CBN hereby announces that further action on the said restructuring exercise has been stopped, until such a time Mr. President may direct otherwise” the statement read.

It also emphasized that no contract has been awarded by the CBN in connection with the printing and minting of the new currency notes and coins.

“Consequently, no currency note or coin has been printed or minted under the proposed exercise”, the statement added.

And confirming this directive, the president’s spokesman Dr. Reuben Abati stated that the decision to suspend the exercise is to enable the central bank to embark on more enlightenment campaigns.

The Nigeria Bar Association (NBA) has called for the immediate sack of the governor of the Central Bank of Nigeria (CBN), Mallam Sanusi Lamido Sanusi over the planned introduction of the N5,000 note.

NBA’s president, Mr Okey Wali at a meeting with some legal luminaries in Abuja on Thursday, said the introduction of the N5,000 note should not be imposed on Nigerians.

According to Mr Wali, for every criticism of the CBN’s policy, what Nigerians get are insults and name-calling, he therefore demanded that if Mr Sansui can not listen to the wishes and demands of Nigeria, the CBN boss should be fired.

He also threatened that the lawyers association will go to court if the federal government goes ahead with the plan.


The lawyers’ meeting was called to deliberate on how to develop the bar association while appraising its performance with a view to identify lapses and suggest ways of reforming the legal profession.

The leadership of the NBA kicked against the plan  to introduce N5,000 note and other national issues which it identified as been clogs in the wheel of the nations development.

While some of the legal practitioners argued that the introduction of the currency will increase inflation in the country, others called on the government not to embark on policies that will harm the nation’s economy.

The summit for the senior lawyers which is the first to be organized by the NBA is aimed at bringing members of bar together to brainstorm on ways of addressing issues of professional ethics, strategic planning and development of the legal profession.

The outgoing President of the Nigerian Bar Association (NBA), Joseph Dauda on Wednesday said that States in Nigeria that want and can maintain their own police force should be allowed to have it.

Mr Dauda, who was speaking as a guest on Channels Television’s breakfast programme, Sunrise Daily, said it is not compulsory for all the states in Nigeria to have their own police.

“States that need them, that have viable economic actives, large states like Lagos, Rivers and those other states that really need machinery to ensure that their investment and people are protected should have it,” he said. 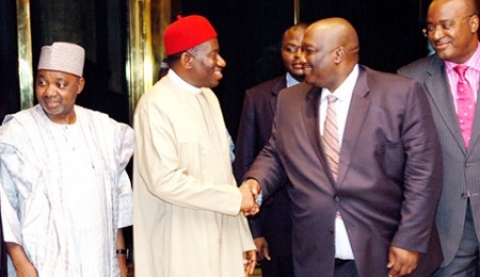 President Goodluck Jonathan has told the opposition and all the people that criticise his administration for non-performance, saying that he will be the most praised president of the country at the end of his tenure in office.

Mr Jonathan said this while speaking at the opening of the 52nd annual general conference of the Nigerian Bar Association (NBA) holding in the Federal Capital Territory on Monday.

The president wondered why the first 12 months of his administration has been awashed with criticisms over problems and challenges that he did not create, and reiterated his resolve to transform the country.

He pointed at the reforms taking place in the power sector, and other infrastructure, reminding the critics that transformation does not come with a wave of the hand.

The theme for this year’s NBA’s conference is “Nigeria as Emerging Market: Redefining our law’s and politics for growth”.

Matthew Kukah delivered the keynote address on Nigeria as an emerging democracy at the NBA conference.

The clergy in his speech wondered why after 50 years of independence, Nigerians are still talking about the emergence of the nation.

He said that things are not walking because Nigerians have refused to understand where they are coming from and he called on all Nigerians to overcome ethnic colouration in all they do.

The outgoing president of the NBA, Joseph Daudu decried the state of the nation especially insecurity in the land and the NBA’s position on the call for state police.

There was a mild protest at the entrance of the International Conference Center, venue for the 52nd lawyers’ conference, by lawyers, who could not gain entry into the venue.

The lawyers protested what they called the high fees charged by the authorities of the NBA leadership.

The Minister of Justice and Attorney General of the Federation, Mohammed Bello Adoke on Monday called for the reform of the judiciary to start at the legal education level.

Speaking at the inauguration of the Council of legal education, Mr Adoke said that if these fundamental reforms are not implemented in earnest, the legal profession may continue to suffer serious decline and loss its pride of place in the affairs of the country.

The Minister urged members of the Council to ensure that the necessary restructuring and organization of the legal education sector is put in place. He said the vision of the Council should be to promote the Nigeria legal system until it is at par with the international standard.

“We must produce lawyers capable of providing manpower needs of the country in the emerging fields of law and technology,” Mr Adoke said.

He said that the Council should brace itself to be able to train lawyers on E-commerce, cybercrime, biotechnology and space law.

“Our lawyers must also be equipped to prosecute complex international crimes such as genocide, crimes against humanity, war crimes, organised crimes such as human trafficking and child labour,” the attorney general said.

The need to reform the legal education was also of concern to both the Director General of the Nigeria law school, Tahiru Manmman and the President of the Nigerian Bar Association, Joseph Daudu.

Both Misters Manmman and Daudu agreed that the laws guiding the legal education in Nigeria need to be updated to reflect the demands of the time.

“Law itself is very archaic and a lot of things there are obstructions to good governance and good administration both in the council and in the Nigeria Law School; so some of the provisions of the law need to be looked at,” Mr Manmman said.

“The NBA sent three bills to the Senate and not with a mind-set but with a foresight that changes are needed and changes are necessary to bring up the quality of legal education in this country,” Mr Dauda said.

The council has a mandate to ensure quality legal education in tertiary institutions and the Chairman of the Council, Onueze Okocha promised that the Council will do its best to achieve its objectives.

Mr Okocha called for the amend mention of the laws governing the council.

“The short preliminary discussion that I’ve had with the Director General of the Law School, I pointed out to him that there were few areas we needed to consult with the Honourable Attorney General and Minister of Justice to see if the law can be fine-tuned,” he said.

The reason for the fine-tuning according to Mr Okocha will be to address “some areas that are still hazy, some questions that are still doubtful from the provisions of the status are properly clarified.” 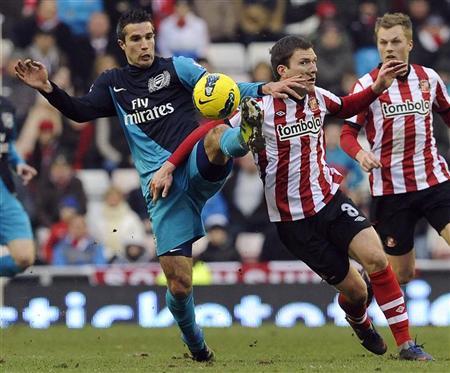 Arsenal captain Robin van Persie has put talks over a new contract on hold until the end of the season so he can concentrate on playing and not personal matters, the Dutch international striker said.

Van Persie, the top scorer in the Premier League this season with 22 goals, has been linked with a move away from Arsenal after eight years. His current deal expires next year.

In his column in the matchday programme ahead of Sunday’s North London derby with Tottenham Hotspur, Van Persie said discussions over a new contract will not start before the end of the season as he only wants to focus on playing.

“There have been a lot of stories, generally contradictory ones, about my contract situation recently so I’d like to make it clear,” he wrote.

“There’s nothing complicated or sinister – the club and I have both agreed to speak at the end of the season and see how things stand. The boss (Arsene Wenger), (chief executive) Ivan Gazidis and I are all comfortable with it.

“I need all my focus to be on football – on captaining this team, improving every day, doing extra work on the training pitch and preparing for the very busy schedule of fixtures we have.

“If I look down the list, there’s not much time to sit down and think about anything else! “For me, this is a time to play football and not speak about personal things. All of my energy needs to go on getting this team where we want it to be this season.”

Arsenal have endured an erratic season, but Van Persie has been the one constant success, with 28 goals in all competitions before Sunday’s match.

After facing Spurs, Arsenal are at Liverpool next Saturday before AC Milan visit the Emirates in the second leg of their Champions League last 16 tie, when the Londoners will attempt the near impossible task of overturning their 4-0 deficit from the first leg.

Having been knocked out of the FA Cup and League Cup, out of contention for the league title and unlikely to progress in the Champions League, Arsenal are heading for a seventh straight season without a trophy.