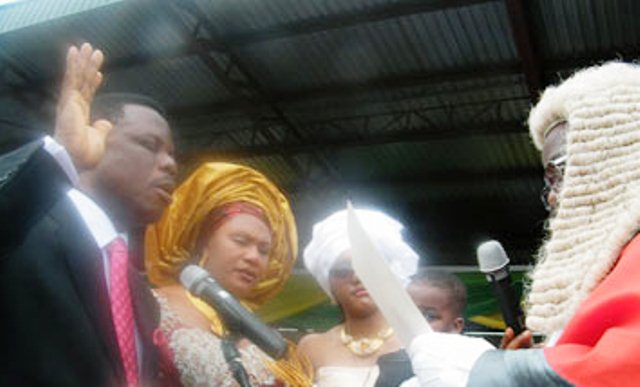 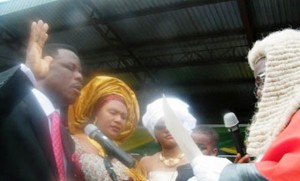 Dr. Willie Obiano has been sworn in as the new Executive Governor of Anambra State.

The swearing-in held at the Alex Ekwueme Square, Awka, and was conducted by the state Chief Judge, Justice Peter Umeadi, in front of a mammoth crowd.

The swearing-in brings to an end, the 8 years of Governor Peter Obi’s administration, as he bows out of office amidst chants of excitement from the people of Anambra State who commended his administration as having performed creditably well.

Taking the oath of office, the new governor, who was sworn in alongside his deputy, Dr. Nkem Okeke, emphasized security, power, and agriculture as areas of priority.

Former Governor, Peter Obi, expressed pride in the Anambra he was leaving behind. He recalled that when he assumed office in 2006, there was no office for him to move into and no official car for him, adding that his successor, Obiano was lucky to have things in place.

Emphasizing the financial stability of the state to accommodate more development, Obi went further to solicit support from the people for the new governor.

The Abia State Governor, Theodore Orji, among many other dignitaries from within and outside the country graced the occasion that was acclaimed to be the first time an outgoing governor would be witnessing the swearing in of an incoming governor. Special Adviser to President Goodluck Jonathan on Inter-party Matters, Ndii Obi, represented the President at the ceremony.

Anambra’s new governor, a technocrat, who has worked as a banker, was sworn in to pilot the affairs of the state for four years.