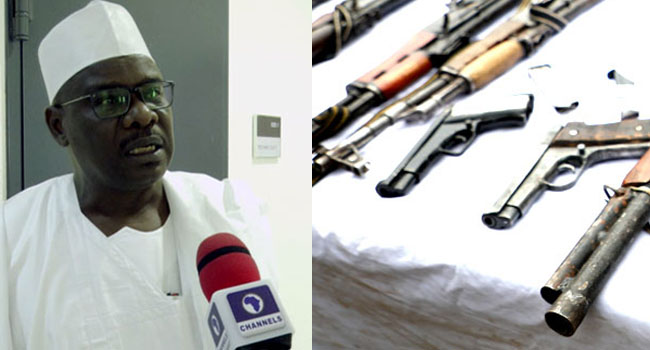 Senator Ali Ndume has said the bulk of arms and ammunition used by insurgents were carted away from the armed forces and other security agencies in the country.

Ndume who represents Borno South noted that apart from stealing arms from Nigeria’s security agencies, the criminals also get weapons from nations like Libya and Chad.

“Most of the arms and ammunition they use are the ones they succeed in carting away from the Nigerian soldiers and other armed forces or security agencies,” the Chairman, Senate Committee on Army, explained on Thursday during an interview on Channels Television’s Politics Today.

“I know they have some small arms coming from up there like Libya, Chad, and all that but the bulk of the equipment they use are the ones they succeeded in stealing from our armed forces.”

Nigeria’s security situation appears to have worsened in recent months despite reassurances from President Muhammadu Buhari and security agencies.

Banditry and kidnaping are now rife in the West African nation, further compounding the challenges created by terrorists in the northeastern part of the nation.

Most of the ammunition used by insurgents were stolen from the armed forces, says Senator Ali Ndume. #PoliticsToday#CTVTweets pic.twitter.com/lvn99SFN9E

But Ndume says the Nigerian Army is intensifying efforts at riding the nation of insurgents, adding that the criminals are feeling the heat from the security agents.

“Most of the insurgents, they do hit-and-run. Sometimes, they do hit on purpose” the lawmaker added. “Like now, they are trying to do that because the heat is much from the Nigerian army, the new army commander is putting heat on them, they are desperate to get arms and ammunition.”

He also believes the Nigerian Army can do better in tackling the myriad of security threats facing Nigeria if it is well-funded and equipped.

“Go and check what Nigeria is spending on militarily and compare it with that of Chad that is poorer than us, or Niger (Republic),” Ndume explained.

“Go and see the Nigerian soldiers and the Cameroonian soldiers. Their kitting is different from our own. It is superior to our own despite the fact that they are poor because they placed priority on their security.”