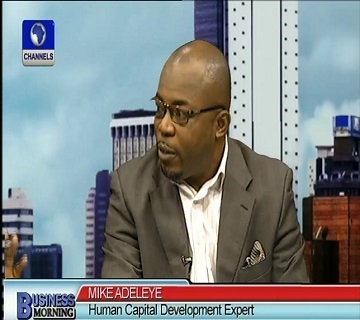 The disparity between economic growth in the country and welfare indicators is owing to the lack of inclusiveness in the economy’s growth trajectory.

This is the opinion of two human capital development experts, Mike Adeleye and Bisi Adeyemi who were on Business Morning today to focus on the 2014 Human Development Index Report released recently by the United Nations Development Programme where Nigeria was ranked 152 out of 187 countries.

The report, which placed Nigeria among countries with Low Human Development, was released on Monday, August 18.

The report said the disparity between economic growth in the country and welfare indicators can be explained by the lack of inclusiveness in the economy’s growth trajectory.

At the presentation of the report, UNDP Administrator, Helen Clark, said in line with the human development paradigm, the report took a people centre approach and paid particular attention to disparities between and within countries by identifying the “structural vulnerability” group of people who are more vulnerable than others by virtue of their history or their unequal treatment by the rest of the society.

“This vulnerability has often evolved and persisted over long periods of time and may be associated with gender, ethnicity, indigeneity or geographic location. Many of the most vulnerable people and group face numerous and overlapping constrains on their ability to cope with setback,” she said.

The report that placed Nigeria as number 9 among 42 in the list of Low Human Development countries with the first three on the list as Nepal, Pakistan and Kenya and the last as Central African Republic, Congo and Niger also revealed that 1.2 billion people live on less than $1.25 a day and 1.5 billion live in multi-dimensional poverty.