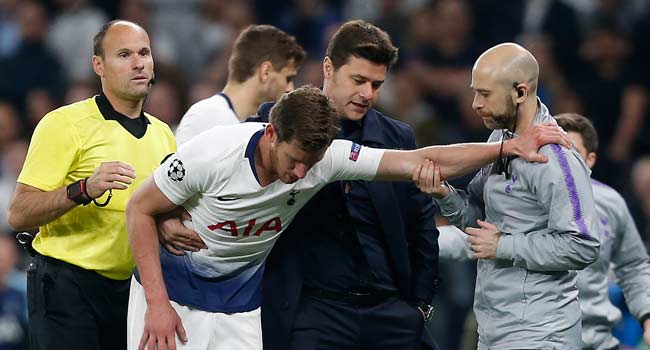 Tottenham defender Jan Vertonghen will see a neurologist on Thursday after suffering a horrific head injury during his side’s Champions League semi-final defeat against Ajax.

Vertonghen was dazed and covered in blood following an accidental collision with Tottenham team-mate Toby Alderweireld in the first half on Tuesday.

The Belgium international initially tried to play on after being checked by Tottenham’s medical staff, but he still looked groggy and had to be helped off the pitch moments later.

It was feared Vertonghen had suffered a concussion, raising questions about the decision to allow him to briefly resume play.

Vertonghen has shown no ill-effects since and tests so far have been all clear, but Tottenham revealed he will go for an additional examination with the specialist on Thursday.

“Jan Vertonghen has undergone further assessment today (Wednesday 1 May) after sustaining a head injury in last night’s Champions League semi-final first leg against Ajax. He also suffered a small cut to his nose that was bleeding heavily,” a Tottenham statement said.

“Jan was immediately withdrawn as a result of the player informing medical staff that symptoms were developing suddenly and that he no longer felt stable standing up.

“Tests today have been clear and testing will continue for the next few days.

“Additionally, as is standard club policy with certain injuries, we shall also be seeking independent advice and Jan is due to see a neurologist, who specialises in elite athletes, tomorrow. The player has reported no ill-effects today.”

Vertonghen tweeted: “Not the way I wanted the game to go last night. Feeling ok today. Thanks to both sets of fans for the positive messages.”