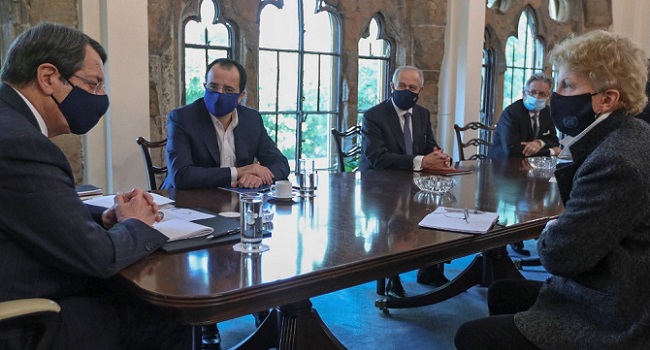 Cyprus has been divided since 1974 when Turkey occupied its northern third in response to a coup orchestrated by the military junta then in power in Athens aimed at annexing the island to Greece.

There have been no official UN-sponsored negotiations on the island’s future since a conference in Switzerland –- also involving Britain, Greece, and Turkey –- collapsed in July 2017.

“During the meeting, the President of the Republic expressed his readiness to participate in the informal five-party meeting,” Cyprus government spokesperson Kyriacos Koushios said.

“He also expressed his expectation that the… meeting will lead to a substantial resumption of talks, with the aim of reaching a solution to the Cyprus problem,” he told reporters.

Guterres is hoping to get the three governments more involved to build momentum.

In a report to the UN Security Council this month, Guterres said the parties had expressed a willingness to attend an informal conference under his auspices.

“I intend to invite the sides and the guarantor powers to this informal meeting as soon as practicable in 2021,” Guterres said.

Guterres also acknowledged “scepticism” on the prospects of peace talks resuming has risen on both sides of the divided island.

In November, rival Cypriot leaders held a “break-the-ice” meeting at which they promised to back a UN-led peace push involving the outside powers.

It was their first and only meeting since the Ankara-backed Tatar was elected leader of the breakaway north in October.

Tatar was elected on a hardline platform of seeking a two-state solution for Cyprus, rather than a bi-communal federation.

The two men have acknowledged their positions on the way forward are “far apart”.

Britain, Greece and Turkey act as guarantors of the island’s sovereignty under the treaty that gave Cyprus independence from British rule in 1960. 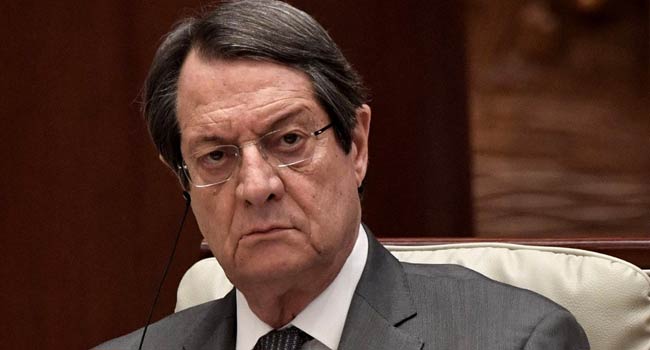 Cyprus President Nicos Anastasiades on Friday sacked the country’s police chief as pressure mounted over the authorities’ botched and delayed response to the killings of seven foreign women and girls.

A letter by the president to Zacharias Chrysostomou, seen by AFP, informed the police chief that his services would be considered “terminated” as of May 7.

Anastasiades said his decision was based on “the apparent negligence and dereliction of duty of the police in investigating reports of missing persons”.

He said this negligence led to the case “not being solved in a timely manner, while some of the horrific crimes that shocked Cyprus could have been prevented”.

The announcement came a day after Justice Minister Ionas Nicolaou announced his resignation over the case, which went undetected for nearly three years, and after the president held a meeting with Chrysostomou.

Cypriot authorities have been accused of failing to properly investigate the women’s initial disappearance due to neglect and racism.

The remains of two Filipinas, a woman believed to be Nepalese and a fourth, so far unidentified, woman have been found in and around two lakes outside Nicosia since tourists spotted the body of one of them on April 14.

Police were searching a toxic man-made lake southwest of Nicosia on Friday after they found a concrete block similar to one discovered over the weekend in a bag lifted from the lake with a body inside.

The body was thought to be that of 36-year-old Livia Florentina Bunea, although it has not been officially identified.

Detectives who flew in from Britain to help with the investigation are expected to leave the island on Friday.

Outrage over the handling of the case has prompted protests outside the presidential palace in the capital Nicosia, and Anastasiades has said the government will announce new measures to better protect foreign workers.

Outgoing justice minister Nicolaou said he was quitting for reasons of “principle and conscience”, while adding he had no personal involvement in the case that went undetected for nearly three years.

The chief of the main opposition communist party AKEL slammed Nicolaou for failing to quit sooner.

“Political accountability would exist if he resigned on the first or the second day that this story broke,” Andros Kyprianou said.

“Nineteen days later, following intense public outcry and pressure to stand down from his party… this is not called political sensitivity.”

On Friday, the president also met diplomats from non-EU countries, who handed him suggestions on how to best monitor foreign workers from third countries, India’s envoy to the island said.

Indian high commissioner Dr R.K. Raghavan told reporters he was assured that Nicosia will take every possible step to strengthen the confidence of foreign nationals in Cyprus, especially workers from India, Vietnam, Sri Lanka and the Philippines.

Cyprus government spokesman Prodromos Prodromou said the president “expressed his regret over the horrific crimes and apologised on behalf of the State and the Cypriot people to the representatives of these countries”. 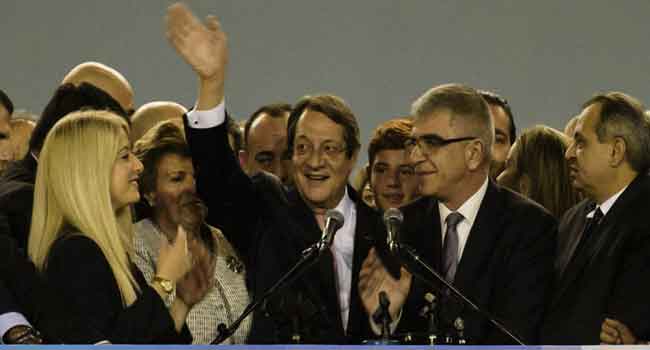 Cypriot President Nicos Anastasiades on Sunday won re-election for a second term, seeing off a leftist challenger with vows to restart talks to unify the island and cement an economic recovery.

The official final result after a second-round run-off saw the conservative incumbent claim 55.99 percent of the vote in the Greek-majority European Union member, ahead of Communist-backed Stavros Malas on 44 percent.

Apathy has been on the rise after a lacklustre campaign — especially among young voters — and the final official turnout stood at 73 percent.

Anastasiades, 71, pledged at a ceremony where he was officially declared the winner “to address the problems faced by the youth, the vulnerable, and modernise the state”.

“My priority is to tackle the occupation of our country but without ignoring the sensitivities of the Turkish Cypriots,” he said.

Jubilant supporters of the president at the event welcomed his election for another five years.

“I was confident because people could see all he has done during the past five years and see that he is the man the country needs,” lawyer Christina Zikkou told AFP.

Defeated Malas said the result was “disappointing but we have to accept it”.

“The struggle for social justice and the Cyprus problem does not end with these elections…our fight is not lost,” he said.

European Commission President Jean-Claude Juncker congratulated Anastasiades and said he hoped the victor would “continue to pursue… the policies that have steered Cyprus on the path of economic growth.”

“I would also like to take this opportunity to assure you that I stand ready as ever to assist in the efforts to bring to an end the division of the island and achieve the reunification of Cyprus,” Juncker said in a message.

As ever, the nearly 44-year division of the eastern Mediterranean island between the internationally recognised Republic of Cyprus in the south and a Turkish-backed statelet in the north loomed large over the vote.

Anastasiades has pledged fresh talks with Turkish Cypriot leader Mustafa Akinci despite the acrimonious collapse last July of UN-backed negotiations that came closer than ever to sealing a deal.

Dovish former health minister Malas, 50, had slammed his opponent for not going far enough to achieve a deal — but voters appeared unwilling to take the risk on the challenger.

Despite the promises of a new peace push, there is deep scepticism that any progress can be made to overcome issues including the presence of 40,000 Turkish troops in the north.

Relations between the Turkish and Greek Cypriot sides remain tense, and there is little sign that a nationalist government in Ankara will be willing to budge.

“The wider political framework in which this president comes to power is not conducive for a settlement,” said University of Nicosia professor Hubert Faustmann.

This time around the economy was a dominant issue for the roughly 550,000-strong Greek Cypriot electorate as the island recovers from a 2013 financial crisis.

Anastasiades has claimed credit for an impressive recovery since agreeing a harsh 10-billion euro (more than $12-billion) bailout just weeks after taking power.

But major challenges remain, despite record numbers of tourists.

The economy is still smaller than before 2013, employment remains around 11 percent and banks are awash with bad loans.

Exploration is going on for oil and gas off the island’s shores that the authorities hope could boost their coffers.

AKEL — the left-wing party backing Malas — was in charge ahead of the crisis and is widely held responsible for tanking the economy.