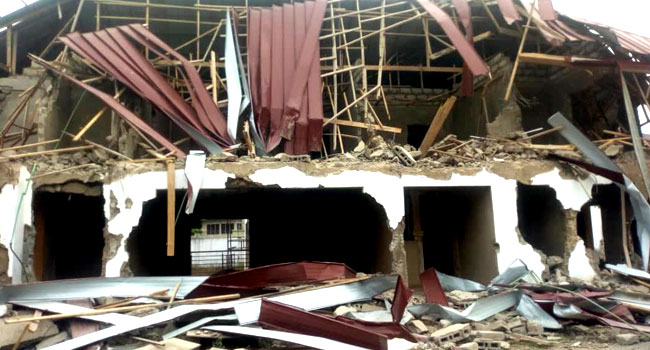 Two persons have been charged following their arrest over the demolition of the Nigerian high commission building in Accra, the capital of Ghana.

According to a press release from the Criminal Investigation Department in that country, the suspects are being charged with conspiracy to commit crime, namely: unlawful entry and causing unlawful damage contrary to the Criminal and other Offences Act 1960.

The statement noted that the suspects were arrested on Monday, June 22 and will be arraigned before a court of law.

Earlier, President Nana Akufo-Addo of Ghana formally apologised to President Muhammadu Buhari in a telephone call over the incident, promising full investigation into the matter.

The Ghana leader assured President Buhari that he has directed a full investigation into the matter, assuring that justice will be served.

It will be recalled that a businessman who claimed ownership of the land housing the Nigerian mission reportedly moved with security personnel to demolish some portion of the staff quarters.

Although the demolition took place on Friday, the man was said to have shown up the previous week with some pieces of evidence to support his claim and began to knock down the fence surrounding the building.

A source at the Ministry of Foreign Affairs told Channels Television that the action of the man was not opposed, adding that the Nigerian High Commission petitioned the Ghanaian Government about it, but there was no response.

Following the incident, many Nigerians including the Minister of Foreign Affairs, Geoffrey Onyeama and the Speaker of the House of Representatives, Femi Gbajabiamila have condemned the action.