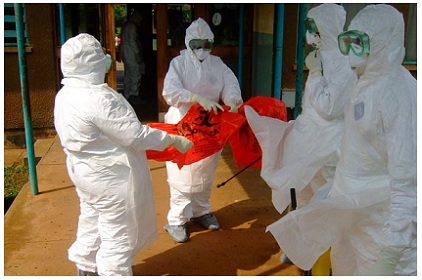 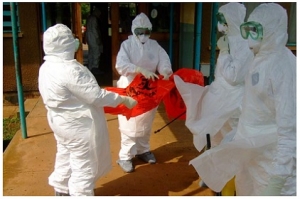 A Lagos doctor who treated the Liberian man that died few days ago of Ebola Virus has tested positive to the Virus, Nigeria’s Minister of Health said on Monday.

The minister broke the news on Monday during the inauguration of a treatment research group for Ebola in Nigeria .

According to the Minister, 70 people are now placed under surveillance while eight people would be quarantined on Monday for developing symptoms of the disease.

The group which is co-chaired by Professor Shingu Gamaliel and Professor Innocent Ujah also has Maurice Iwu, a Professor of Pharmacognosy and officials from the Centre for Disease Control as members.

The minister advised the public to be wary of treatment claims including the use of bitter-cola as most treatment findings are still in their laboratory stages.

There is currently no known cure for Ebola virus in the world, but medical experts say efforts are on to find a remedy to the disease that has claimed over seven hundred since its out-break this year.

Committees of the National Conference have started taking positions on critical issues that will help reshape Nigeria.

After their deliberations on Monday, the Committee on Devolution told reporters that it had amended the revenue allocation formula for the three tiers of government while the Committee on Politics and Governance said it had agreed on the need to remove immunity clause from the 1999 constitution.

It is the start of the third week since the committees started deliberations. Some of the committees decided to meet behind closed doors while others allowed journalists to observe their proceedings.

Meanwhile, news of the death of a delegate, Dr Mohammed Jumare, from Kaduna State was announced by the conference secretariat.

Dr Jumare, who came to the conference as an elder statesman died in the early hours of Monday in Abuja and was buried later in the day in Zaria.