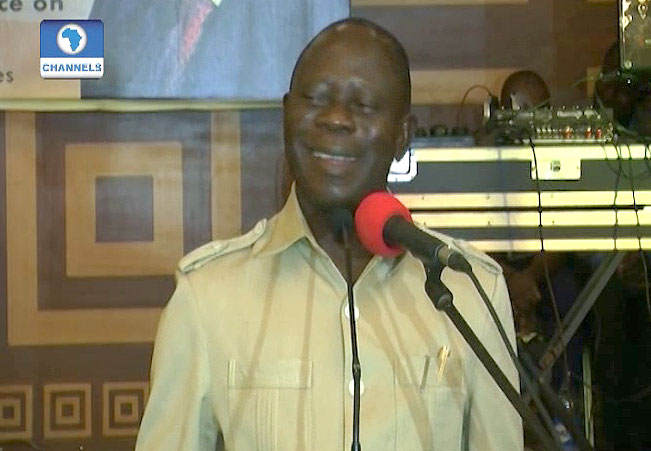 A mild drama ensued on Friday in Benin City as a helicopter conveying Edo state Governor, Adams Oshiomhole, to the burial ceremony of Senator Ben Obi’s wife in Awka, Anambra state, was grounded for about an hour at the Benin airport by officials of the Nigerian Airport Management Authority (NAMA).

The helicopter belonging to OAS Helicopter had picked up the Governor at the Government House premises but was ordered to immediately land at the airport for clearance.

Aviation authorities contacted the pilot of the aircraft, James Manahash, shortly after take-off and ordered him to return to Benin, the Edo state capital.

The pilot was reportedly asked to go and pay some dues he should have paid before take-off.

After landing, Governor Oshiomhole who had instructed the pilot to return, left the chartered aircraft after waiting for about an hour and drove away in his official car in anger because the pilot could not get the aviation officials’ to proceed on his flight.

The Special Adviser to the Governor on Media and Publicity, Kassim Afegbua who briefed journalists afterwards, said the Governor had to cancel his trip after being delayed for an hour and left for his village, Iyamho.

Mr Afegbua said it is worrisome that governors are no longer respected adding that they will not be provoked by the actions of NAMA.

Channels TV correspondent in Benin city however sought to get NAMA’s reaction on the matter but all efforts to see the Air Space Manager was unsuccessful as NAMA officials prevented our crew from entering NAMA’s premises, claiming they needed to get tags to let our crew in, yet they refused to provide the tags.

In his reaction, the coordinating general manager, Aviation Parastals, Yakubu Dati, said there is nothing political about the action.

He insisted that the decision was taken because the pilot failed to file the mandatory flight plan and passenger manifest and refused to do so as demanded by the aviation officials.

This is coming barely over a month after Rivers state-owned bombardier aircraft which was meant to convey Governor, Chibuike Amaechi, was prevented from leaving the Akure Airport because the pilot allegedly failed to declare the flight manifest.