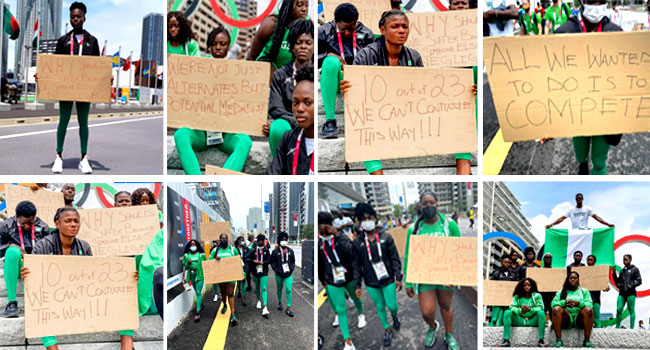 Nigerian athletes disqualified from the 2020 Tokyo Olympic Games hit the streets of the Japanese capital in protest on Friday.

They had prepared to represent the country in the track and field events but were declared ineligible to participate in the games.

On Wednesday, Channels Television reported that the 10 athletes were declared ineligible to compete at the games by the Athletics Integrity Unit (AIU).

AIU is an independent body created by World Athletics to manages all integrity issues – both doping and non-doping.

In its reaction, the Athletics Federation of Nigeria (AFN) took responsibility for the lapses recorded during the process and reassured Nigerians that the nation’s performances at the Olympics would not be negatively impacted.

While participating countries continue to celebrate heroic achievements and medals in the Japanese capital, it’s a sad tale for the affected athletes would condemn what they described as the negligence by sports administrators.

They marched through some of the streets of Tokyo carrying placards with various inscriptions as they registered their displeasure over the situation they have found themselves in.

The protests by the athletes were captured in photos shared by a Facebook user, Kuti Dare Gattuso.

‘God Has Greater Plans For Me’

Ofili, in an emotional message, was quoted as saying she and her counterparts were punished for the unknown offence committed by some persons.

Hi everyone. It’s with utmost disappointment I share the news that I won’t be competing at the ongoing Tokyo 2020 Olympic game after coming this far.

Firstly, I give God Almighty all the thanks for the journey thus far and all my accomplishments this season prior to the Olympics. Thanks to my family all my fans and all those that intercede for me in their prayers.

I feel it’s right that everyone out there knows the truth. I was punished for the crime committed by those who are supposed to be looking out for me because of incompetence and selfishness.

I worked really hard to qualify for the Olympics and in the end, this is the payment I got in return, ineligible to compete.

I am a product of grace and God always got my back. #Though_Sorrow_May_Come_at_Night. #Joy_Will_Definitely_Come_in_the_Morning.

Y’all negligence can’t demoralise me for I know God has greater plans for me. Forgiveness is of the Lord. I pray God gives me the grace and enablement to do so ASAP.

Thanks, everyone, and God bless

AIU announced that the affected Nigerians were disqualified along with eight athletes from other countries while two others were replaced prior to the submission of their entries to World Athletics.

It explained that the affected athletes, who represented some ‘Category A’ Federations, were disqualified from the final entries for the Olympics for failing to meet the minimum testing requirements under Rule 15 of the Anti-Doping Rules.

Nigeria was listed in ‘Category A’ at the start of 2020 after a continued period of weak domestic testing levels. 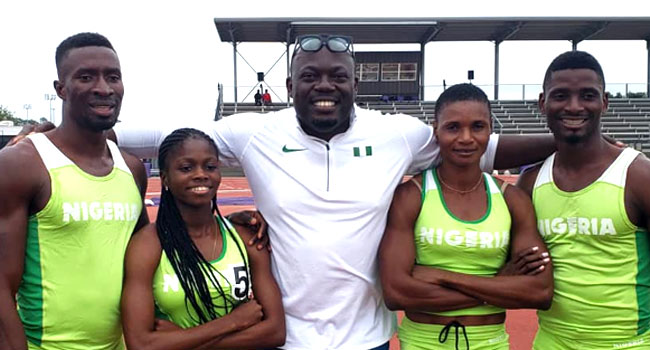 Nigerian athletes, Enoch Adegoke and quarter-milers Nse Uko Imaobong and Patience Okon-George will have another chance to beat the 10.05 seconds (100m) and 51.35 seconds (400m) qualification standard for the Tokyo Olympics on Tuesday when they compete at the 2021 USA Track & Field (USATF) Open Meet in Dallas, Texas.

The trio will lead a couple of other Nigerian athletes currently on training and qualification tour in the United States as the countdown to the June 29 Olympics qualifying deadline begins.

Adegoke is the fastest home-based athlete this season with his 10.16s performance in January in Akure which topped the world list for a few weeks.

He is also the second-fastest Nigerian behind Divine Oduduru who leads the ranking with the 10.05s he ran last month in the United States.

Adegoke needs to match Oduduru’s national top list performance or run faster to qualify for the 100m event in Tokyo, and will hope to take the chance in Dallas.

Also seeking to make it to Tokyo are Nse Uko and Okon-George, Nigeria’s fastest quarter-milers this year.

Nse Uko who won the Edo 2020 Festival with a new 51.70s personal best aims to run a sub 51s for the first time in her career and in the process, crack the 51.35 qualifying barrier in front of her.

Okon-George, a veteran quarter-miler, targets a faster time than the 51.84 seconds she ran in March last year at the Athletics Federation of Nigeria Test The Track Meeting in Benin City.

Sprinters Jerry Jakpa and Joy Udo-Gabriel will also get the chance to run new lifetime times that will be required to get into the event in Tokyo.

Jakpa ran 10.33s at the Edo 2020 Festival to place third but knew he needed to perform a miracle in Dallas to match Oduduru’s 10.05s personal season’s best to qualify.

Pretty Udo-Gabriel who finally raced under 11.4s (11.34s) at the festival will need to continue with the momentum and run 11.15s to secure her ticket to Tokyo and join the duo of Blessing Okagbare and Grace Nwokocha who have sealed qualification.

Sikiru Adeyemi, Ifeanyi Ojeli, Nathaniel Samson, and Chidi Okezie are also expected to perform miracles by becoming the first Nigerians to run below 45s in six years after Orukpe Erayokan last did in September 2015. The qualifying standard is 44.90 seconds.

None of the quartets is close to the mark, but Okezie is the fastest courtesy of the 45.60s he ran to win the 400m gold at the National Sports Festival in Benin City.

The relays are not included in the schedule for this year’s USA Track & Field (USATF) Open meet in Dallas, Texas. 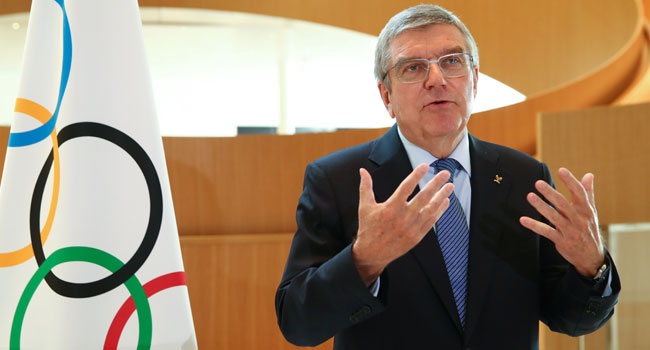 The President of the International Olympic Committee, Thomas Bach, has commended the Nigeria Olympic Committee Athletes Commission for their initiative in creating awareness on the COVID-19 pandemic, using the athletes to convey a message of hope.

At an online conference meeting that included 200 athletes representatives, IOC Executive members as well as Athletes Commission members and the Olympic Channels, Bach praised Nigeria for being the first country to come up with such initiative and encouraged other National Olympic Committees to emulate the gesture.

The Chairman of the Nigeria Olympic Committee Athletes Commission, Olumide Oyedeji, represented the country at the meeting.

Oyedeji used the opportunity to ask about the faith of athletes currently on IOC scholarship grants and for other upcoming athletes that may need to receive such grants to support their training and qualification.

In his response, the IOC President appreciated the NOC and the Nigerian Government for the hospitality accorded him during his visit to Nigeria which he called a memorable one.

He said that all athletes currently on Olympic scholarships would continue to enjoy the benefit until the Olympic Games while further windows would be opened to consider upcoming athletes.

Bach also assured Nigeria that discussions were ongoing for the Nigeria Olympic Committee through the Athletes Commission to benefit from the Adecco programme in a matter of three months.

The Athletes Career Programme relates to the Athletes 365 initiative with Adecco and the plans to assist the athletes in both their active days and while in retirement, using the Athletes Commission channel.

Bach, however, advised the athletes to remain focused in their training and preparation for the Tokyo 2020 Olympic Games which would take place in the summer of 2021.

He assured them that the IOC would continue to work with the various International Federations to complete the remaining qualification series. 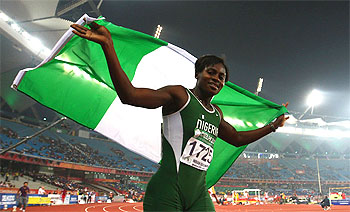 The late Coach died in a Hospital at Ado Ekiti State on Monday after he was admitted for an undisclosed illness.

Coach Erin as he is fondly called was a respected track and field coach who discovered and nurtured the country’s athletic stars such as Fatimah Yusuf, Seun Ogunkoya and Damola Osayomi into becoming international stars.

Fatimah Yusuf won a gold medal in the 400m sprint at the Commonwealth Games in 1990 in Auckland, New Zealand.

And the third Nigerian woman to run in the 100m finals at the IAAF World Championships, Damola Osayomi is also the reigning All Africa Games 100m queen.

Commenting on the death of Coach Erin on her Facebook wall, Osayemi said she has always taken coach Erin as her ‘father’ because he helped her in nurturing her talent which brought stardom.

“I woke up this morning (yesterday) with very sad news to my soul that my grassroots coach, the man that brought me up in track and field, a coach like a father to me whom a lot of athletes think is my father, is no more.

“Coach Samuel Akinyemi a.k.a (Erin) is gone. May your gentle soul Rest in Peace, Coach Erin. You contributed a lot to my life. I will forever miss you my coach,”

Other Nigerian athletes who knew Coach Erin also took on the Social Media Network to pay their last respects to the renowned track and field coach.

President Goodluck Jonathan on Thursday, wished Nigeria’s team good luck and  mandated them to scoop medals at the Olympic Games in London.

Speaking during the handover ceremony of the team at the Sheraton Hotel in Lagos, President Jonathan said that the London Games provide the best chance for the athletes to raise their profile.

Recalling that Nigeria’s best outing at the Olympics was at the 1996 Games in Atlanta, President Jonathan, who was represented at the event by the Minister of Sports and Chairman, National Sports Commission (NSC), Bolaji Abdulahi,  said that it was time for Nigeria to return to winning ways, beginning from London.

“For how long will our best continue to remain in our past is the big question on my mind and that is the challenge before you as you go for the Games in London. We should start asking what strategic policies are we putting in place to make people work and win”, said President Jonathan.

He said that the undying Nigerian spirit was going to propel athletes to greater heights in London.