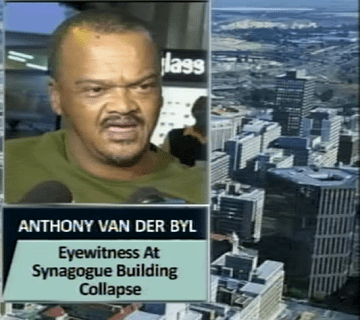 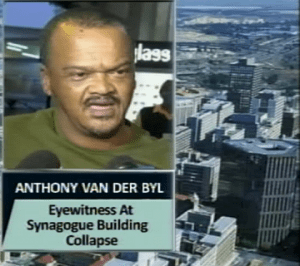 A South African eye-witness, Anthony Van Der Byl, who was at the scene when the Synagogue building collapsed, has warned that people should not blame the leader of the church, T.B Joshua, for the incident but rather, they should investigate the “strange aircraft” which was captured hovering around the building.

The Founder and General Overseer of the Synagogue Church of All Nations, Temitope Joshua, popularly referred to as T.B Joshua, had linked the collapse of the six storey building within the premises of the church headquarters in Lagos, to a “strange aircraft” which he said hovered around the building before it collapsed.

Byl, who lost his wife to the accident, narrated the events leading to the collapse, noting that there was no warning that such a thing would happen.

Byl said he and his wife had been about to eat lunch, before the building collapsed. “We were in the dining room on the ground floor; As we were talking, all of a sudden, I just noticed that the walls on the opposite side broke out.

“It just took about three seconds and then the whole building came on top of us.”

He noted that there was no warning as the entire building came crashing down. None of the pillars had broken off and the building did not tilt to any side.

“Many people all over the world, even the reports in South Africa are trying to point fingers at the structure (the building, how it was built, what material was being used, the building)” he said, adding that he had seen the materials used in building the structure, before the collapse.

“It was top quality material, including the steel”, he insisted, stating that “no one of the news reporters is talking about the footage, that’s been sent to them by the Prophet, on the plane that was hovering around, flying very low.

“No one is talking about that plane”, he argued, urging the public to “stop putting the blame on the prophet.”

He further claimed that the building collapsed as though dynamites had been placed at all corners of the building and detonated.

Byl, who was discharged from the hospital on Sunday, noted that he was yet to see his wife’s corpse as the search process and the different mortuaries was “tormenting”.

According to him, DNA experts from South Africa are working to identify his wife and the other bodies.

He however noted that he had been miraculously healed by T.B Joshua who had touched all his wounds. “A miracle happened. My wounds instantly healed by the power of God,” he said.

Van Der Byl, made these comments via a telephone interview on Channels Television’s Saturday breakfast programme. 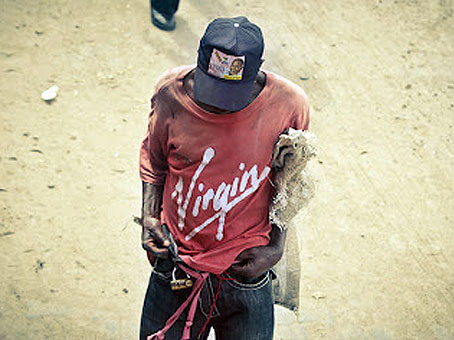 People living at Oke-Ado area of Ibadan, Oyo State, as well as shop owners and automobile dealers along Molete road in the town, on Thursday, watched a drama involving a pastor and a mad man.

The pastor, who was simply identified as Timothy, according to an eyewitness, got to Ososami junctions of Oke-Ado around 5.20 p.m and went to meet the mentally-deranged man, popularly known as Tunde, who was sitting in front of a building in the area.

Semiu, a shop owner around the spot of the incident who spoke with the Nigerian Tribune said the pastor began to read the Bible on sighting the mad man, while he moved closer to him and laid hands on his head.

“At a point, there was a hot argument between the duo, which made the pastor to raise his voice as he was offering a deliverance prayer for Tunde – the mad man. The hot prayer lasted for over 15 minutes before another strange drama began,” Semiu said.

Another witness, a commercial motorcyclist (popularly called Okada rider in Nigeria) said at a point, the mad man removed the pastor’s hand from his head, and “suddenly, a strange spirit got hold of the pastor and he began to remove his cloth. He was naked and laid flat on the ground, speaking a strange language, with foam oozing out of his mouth.”

The mad man, it was gathered, initially left him in this position and sat at some distance away from the pastor, before the duo later sat closer to each other, while onlookers watched the strange drama.