For two and a half years, four young Nigerians, Dickson Dickson, Oladapo Olatunbosun, Oyekunle Oluwagbemiga and Paul Osagie, have been detained in a camp in Chengalpattu in Tamil Nadu State for alleged involvement in online credit card fraud.

They say they are innocent but a court is yet to decide that.

After they have been granted bail and have submitted their travel documents to government authorities, they have not been allowed to go home; instead they are spending their days in a camp that activists say should have been shut down long ago.

Taking a closer look at their ordeal, an expert in International Law, Professor Nsongura Ndomnana, says that as much as the issue surrounding the arrest of the Nigerians was not quite clear, the Indian government was binding by a number of Human Rights instruments one of which is the International Covenant on Civil and Political Rights to respect their rights.

He said that there were still some issues that might need to be sorted out in order to have a clearer understanding of the reason behind their detention.

“If the story as presented by the suspects is the truth, then there is a lot more that the Nigerian government would need to do,” he said.

Professor Ndomnana explained that an alien – a foreigner – in international law is binding by the laws of the land where he is whether lawfully or unlawfully.

“No country is under any obligation to admit an alien. Every country is sovereign and can decide who will come into the country. Most countries provide some conditions that must be met. Often times, some countries go into bi-lateral agreements that weave some immigration and visa requirements that will allow certain category of citizens to enter those other countries. In most cases you will require a visa to enter into another country.

“If you enter lawfully, after satisfying those requirements, then you are regarded as a lawful alien,” he explained.

He stated that there was need to know whether the Nigerians are living in India illegally or not.

The International Law expert pointed out that one of the incidents of sovereignty is that anyone who enters a country, whether a citizen or a non-citizen, is subject to the laws of the country and could be tried in the country.

“He could also be deported and tried in his own country if the crime is also a crime in his own country. India could try them on the basis of the principle of territoriality and they can also be tried in Nigeria on the basis of the principle of nationality. A number of factors determine which country might want to exercise jurisdiction. Some countries may not have resources needed in handling such cases. So they might prefer to deport the individual,”  Professor Ndomnana further explained.

He insisted that India could be violating the rights of the Nigerians, as the chapter 3 of India constitution, article 22 provided for liberty of persons especially in situations where they have been arrested or detained.

According to him, the article provides that no one shall be detained without giving a reasonable explanation for the cause of their detention within a reasonable period.

It also provides that no one shall be detained beyond 24 hours without being charged to court. “If there is any reason for extension that could be given by the magistrate,” The professor said.

He was of the opinion that the detained four Nigerians could engage a legal representative that can seek a reasonable explanation of the reason behind the detention. The legal representative, in this case, can request that the government should provide reasons they should not be released.

“The Nigerian government can come in through the embassy and demand for the detail of this case to find out what the true case is,” he pointed out.

Every Nigerian residence outside the country is actually a Nigerian and should be protected by the Nigerian government.

“That is why those embassies are functioning and they are being paid by tax payers. An injury to an alien is an injury to the country where he is from,” he added. 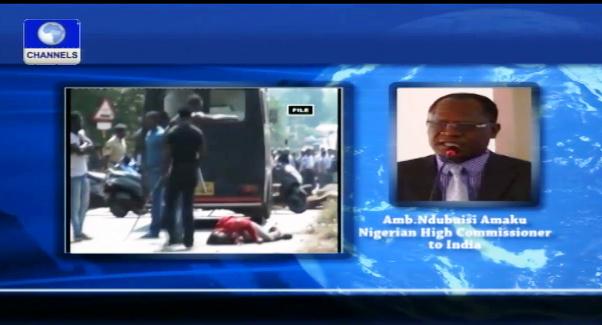 On this episode of Network Africa, the killing of the Nigerian in Goa, India came to the fore.

It will be recalled that a group of Nigerians clashed with the police in India after they allegedly attacked a police vehicle carrying the body of a Nigerian who was said to have been stabbed to death in India’s beach state, Goa.

In this phone interview, Nigerian High Commissioner to India, Ambassador Ndubuisi Amaku, shed more light on the issues. He vehemently denied allegations that the Nigerian killed in India was involved in a drug deal.

“This is not correct, the young man has been determined to be a very innocent, I repeat, innocent person… Even at that, if a Nigerian is involved in drugs, the proper punishment is not to hack him to death.”

Ambassador Amaku expressed Nigerians’ disappointment at the “seeming unwillingness of the local authorities to apprehend the culprit.” He promised that the Nigerian High Commission would handle the issue through the appropriate diplomatic channels. 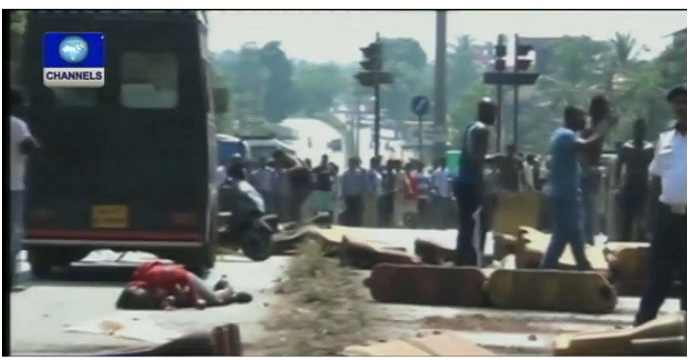 A group of Nigerians has clashed with the police in India after they allegedly attacked a police vehicle carrying the body of a Nigerian who was said to have been stabbed to death in India’s beach state, Goa.

The body of the man, whose name has not been revealed, was found with wounds in Mapusa town, triggering protests by angry Nigerians who removed the body from the van and kept it on the road, blocking traffic in the area

The Chief of India’s Goa State, Manohar Parrikar, said the murder would be investigated.

“We have detained 53 of them (Nigerians) and two of them are in the hospital,” he said.

Manohar Parrikar described the attack on the Police as illegal and said that the state had booked a case on the issue.