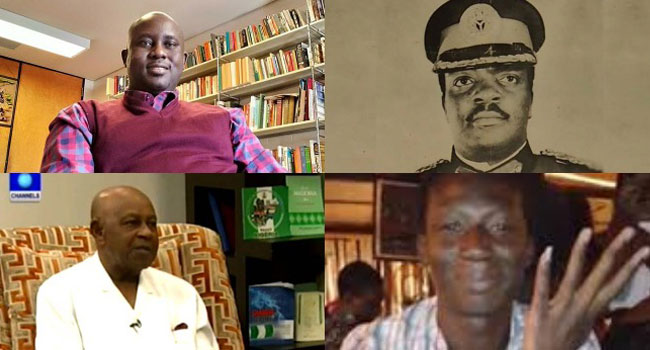 From Nigerian scholar, Pius Adeyemi to Nobel-winning novelist Toni Morrison and Zimbabwe strongman Robert Mugabe, here are some of the notable deaths of 2019.

– 21: Argentine footballer Emiliano Sala, 28, was killed when the plane he was in crashed into the English Channel.

– 30 Grammy-Winning R&B Singer James Ingram dies at 66; his rise to fame came after he lent his smooth vocals to the songs “Just Once”

-16: Bruno Ganz, the actor whose role as Hitler inspired countless parodies died in Zurich, he was suffering from cancer. Ganz died aged 77.

-10: Nigerian scholar, author and popular columnist/activist, Pius Adesanmi, was among those killed when an Ethiopian Airlines plane crashed.

-o1: Grammy-Nominated US Rapper, Nipsey Hussle was shot dead, he was only 33.

-13: Hollywood Icon Doris Day died at 97, she had always been in good health till she contracted pneumonia.

-22: Precious Owolabi, a corps member serving with Channels TV died in a clash between Shiites and men of the Nigerian Police Force.

-25: Tunisia’s President Beji Essebsi died at 92, he was severely ill.

-27: Veteran Sports Journalist, Akinloye Oyebanji, died at the age of 62.

-22: Ex-Ghanaian international Agogo died at 40, he suffered a stroke.

-23: Nigeria’s Chief Trade Negotiator, Ambassador Osakwe passed on. It was undisclosed what the cause of his death was.

-26: Former SGF, Ufot Ekaette (80) died of a brief illness, he was appointed SGF in May 1999 by the then President Olusegun Obasanjo.

-03: Nigeria’s Olympic Silver Medalist, Isaac Promise died at 31, he is said to have collapsed at his apartment gym in Austin.

-31: First Lagos Governor, Mobolaji Johnson died at 83. Johnson became governor of Lagos State in May 1967 until he retired from the Nigerian Army in July 1975 during the military regime of General Yakubu Gowon (rtd).

-15: Nigeria’s Former Minister of Information, Alex Akinyele died at 81, he died of a brief ailment.

-27: Media personality, Binta Badmus, passed on allegedly due to a medical error. She worked with Smooth FM as a radio presenter before joining ‘The Other News’ on Channels TV.

-07: Renowned Pentecostal Evangelist Reinhard Bonnke died aged 79, he was widely known for his gospel missions throughout African countries, including Nigeria and South Africa.

-18: Senator Ben Uwajumogu who was representing Imo North Senatorial District in the National Assembly, died at the nation’s capital, he was aged 51.

May their families, friends and loved ones find comfort, solace, and fortitude to bear the loss. 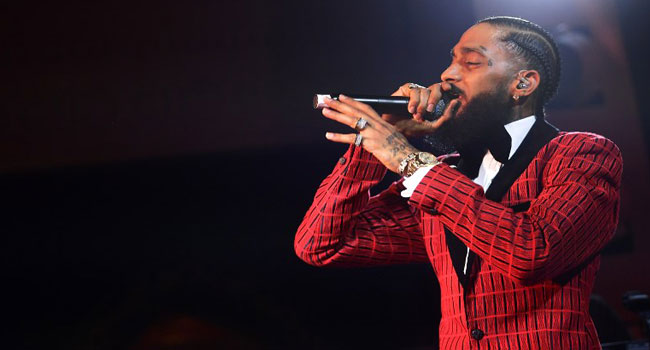 Fans of the late American rapper, Nipsey Hussle’s have taken to social media to remember him on his 34th posthumous birthday.

To celebrate his posthumous birthday, many are expecting large crowds to visit the site of Hussle’s store, the Marathon Clothing.

Nipsey Hussle whose original name is Ermias Asghedom, was killed in broad daylight outside of his Marathon Clothing store on March 31.

Two other men were wounded in the shooting which the Police have said was due to a personal dispute.

One of the suspect, Eric Holder, 29, has been charged with one count of murder, two counts of attempted murder and other charges.

Happy birthday, Nipsey Hussle. Today would have been his 34th birthday. #LongLiveNip #TheMarathonContinues 🏁💙🙏🏽

Happy CDay 2 a Tru Legend A Tru King My Favorite Rapper for the Past 10 years. One of the realest if not the realest Nigga to Ever Be in this Rap Game KING NIPSEY HUSSLE #LLNH S.i.P NH.I.P pic.twitter.com/S8fKqfJ2XI

Happy birthday to late great Ermias Asghedom a.k.a. Nipsey Hussle… Wish You were still here accomplishing what you were in the progress of doing bro. The streets miss you champ R.I.P. #TMC 💙💙🏁 pic.twitter.com/vBhcxghyQC

Happy Birthday to Tha Great Nipsey Hussle. You live on in us. This marathon doesnt stop🏁 #NipDay pic.twitter.com/pRpyI0YP05 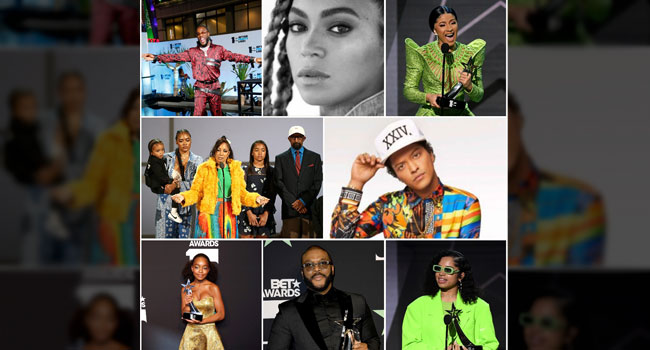 The BET on Sunday held its 19th awards ceremony.

It was another exciting night to celebrate the very best in entertainment and culture with performances and appearances by some of the biggest names across television, film and music.

The night saw artists and top acts such as Bruno Mars, Cardi B, Michael B. Jordan and Nigeria’s Burna Boy, take top honours.

Here’s a full list of nominees and winners for the 2019 Bet Awards. Video Of The Year
21 Savage A Lot Ft. J. Cole
Cardi B Money
Cardi B & Bruno Mars Please Me
Childish Gambino This Is America – Winner
Drake Nice For What
The Carters Apes**T Blackkklansman – Winner
Creed 2
If Beale Street Could Talk
Spider-Man: Into The Spider-Verse
The Hate U Give

Sportswoman Of The Year

Sportsman Of The Year

Album Of The Year 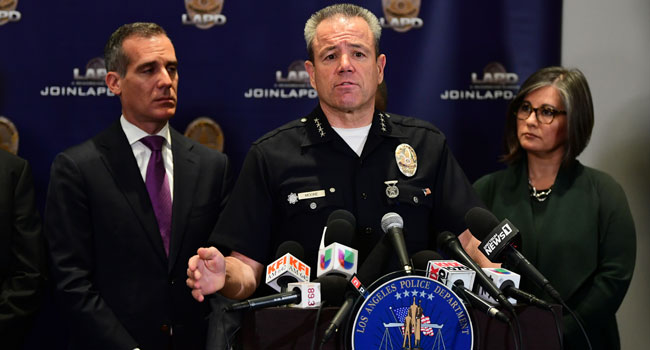 The LAPD said the suspect, Eric Holder, was in police custody in connection with the fatal shooting, which authorities say was not gang-related.

Los Angeles Mayor Eric Garcetti, who had blamed “senseless gun violence” for the death of 33-year-old Hussle, voiced hope for “justice that Nipsey’s family and community deserve” as the arrest was announced.

The killing in broad daylight triggered an outpouring of grief in LA and among Hussle’s superstar peers, who hailed both his musical talents and tireless community organizing.

“Holder walked up on multiple occasions and engaged in conversations” with Hussle, the police chief told journalists.

The suspect then “came back armed with a handgun” and fired several times at close range, hitting Hussle in the head and body.

Two other men who were standing next to Hussle were also wounded.

Moore said the shooting did not appear to be linked to any gang rivalry or feud.

“We believe this to be a dispute between Mr Hussle and Mr Holder,” Moore said. “I’m not going to go into the conversations, but it appears to be a personal matter between the two of them.”

A massive manhunt was launched after the shooting with police asking for the public’s help in locating Holder and his getaway car driven by a woman.

The Los Angeles Times reported that the unidentified woman had surrendered to police on Tuesday and Holder was subsequently arrested.

Both Moore and Garcetti lamented a recent uptick in violence in South Los Angeles, with the police chief saying: “Nipsey Hussle represents the enormity of the lives we have lost.”

Authorities urged the community to come together and avoid any further violence.

“We have a reason to feel hopeful, even in the moments of our most extreme pain,” Garcetti said. “And that’s by turning to each other.

“The absolute worst way to pay back Nipsey’s loss — somebody we lost at the hands of violence — is with more violence,” he added.

Garcetti hailed Hussle’s legacy of peace, urging the city to come together and continue the rapper’s community building efforts.

“This is about young people of colour being able to have an opportunity in their lives,” he said.

Late Monday, a candlelight vigil for Hussle outside of the clothing store where he was gunned down turned to mayhem when a stampede led to several injuries.

Moore said the event was peaceful until someone brandished a gun, prompting people to flee in panic.

The Los Angeles Fire Department said some 19 people were injured in the stampede, including two with critical injuries. One of those critically injured was reportedly hit by a car.

Hussle, born Ermias Asghedom, has been praised by officials in Los Angeles and by his peers for transforming himself from being a gang member to a successful rapper and community organizer who fought for the black and Latino residents of Hyde Park, the South LA neighbourhood where he grew up.

He was set to meet with local authorities on Monday to discuss ways to end gang violence. 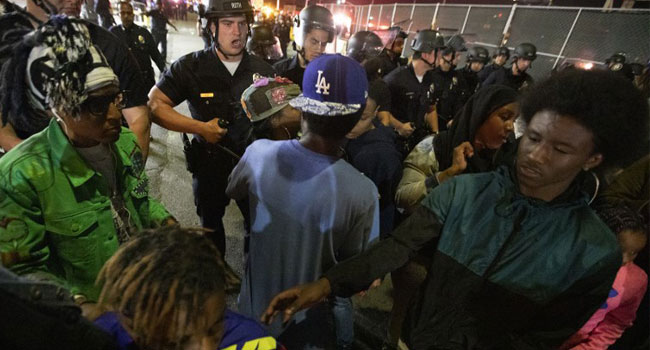 Nineteen people were injured during a stampede at a memorial service on Monday for slain rapper Nipsey Hussle in Los Angeles, the city’s fire department said.

Hundreds had gathered in the southern part of the city outside Hussle’s The Marathon Clothing store where the Grammy-nominated musician was gunned down on Sunday in a suspected gang-linked attack that wounded two other people.

A stampede started just past 8:00 pm (0300 GMT Tuesday) during the service, but it was not clear what triggered it.

“Reports of shots fired at the vigil do not appear to be accurate. We do have injured in the chaos and are attempting to restore order,” the Los Angeles Police Department said on Twitter.

The Los Angeles Fire Department said in a statement that it transported 19 patients, two of them critical, and another two with serious injuries. The rest had “non-life threatening injuries.”

It added that there was “no evidence of any gun shot wounds” and that most people sustained “trample injuries.”

An LAPD spokesman told AFP some of the injured were “possibly stabbed.”

Hussle had found minor commercial success, but he was revered among his peers. His “Victory Lap” scored a Grammy nomination for Best Rap Album this year, and his shock death sparked an outpouring of grief and tributes from hip hop royalty.

In a separate statement posted on Twitter Monday, the LAPD identified the suspected shooter as 29-year-old Eric Holder, who is still at large.

Grammy-nominated rapper Nipsey Hussle was shot dead in the US city of Los Angeles Sunday, sparking an outpouring of grief from fellow celebrities as the city’s mayor blamed “senseless gun violence.”

Local media reported Hussle, 33, was shot in front of his own clothing store Sunday afternoon at close range, by a man who fled in a getaway car.

“Our hearts are with the loved ones of Nipsey Hussle and everyone touched by this awful tragedy,” LA Mayor Eric Garcetti tweeted.

A police spokesman told AFP the suspected shooter remained at large. Two other people were wounded.

The Los Angeles Times reported the shooting was “likely planned and gang-related.”

The Grammy-nominated rapper found minor commercial success but was highly revered among his peers, and his shock death triggered an outpouring of tributes from hip hop royalty.

Superstar Rihanna posted that “this doesn’t make any sense!

“My spirit is shaken by this! Dear God may His spirit Rest In Peace and May You grant divine comfort to all his loved ones! I’m so sorry this happened to you @nipseyhussle.”

Outside his clothing store, a crowd gathered behind yellow police tape, and a grief-stricken woman clasped her hand over her mouth.

At least one cartridge case lay on the ground, near a black ball cap.

Long part of the underground rap circuit, Hussle struggled to find fame but began selling his own mixtapes, which rap king Jay-Z once bought 100 of for $100 each.

Hours before his death Hussle — whose youth was intertwined with Los Angeles gang culture — tweeted: “Having strong enemies is a blessing.”

It was his first formal album, which dropped after six years of teasing but ultimately lost the honour to rap’s woman of the moment Cardi B.

Megastar Drake also posted his condolences, saying: “My whole energy is just at a low right now hearing this.”

“You were a real one to your people and the rest of us,” Drake wrote. “Rest easy my g.”

Born Ermias Asghedom, Hussle was seen by many in Los Angeles as a lynchpin of the community, redistributing his earnings into the violence-plagued neighbourhoods he came from.

The artist was involved in a project to reclaim the California city’s southern districts for the black residents who made it sing.

“Hussle had a vision of a neighbourhood built for and by the sons and daughters of South L.A.,” said city councilman Marqueece Harris-Dawson in a statement following news of the rapper’s death.

“During his life, he moved from shadows into the bright hope of freedom and community revitalization.”

Hussle was open about his early years in the notorious Crips gang, telling the Los Angeles Times newspaper in 2018: “We dealt with death, with murder.”

“It was like living in a war zone, where people die on these blocks and everybody is a little bit immune to it,” he said.

“I guess they call it post-traumatic stress when you have people that have been at war for such a long time.”