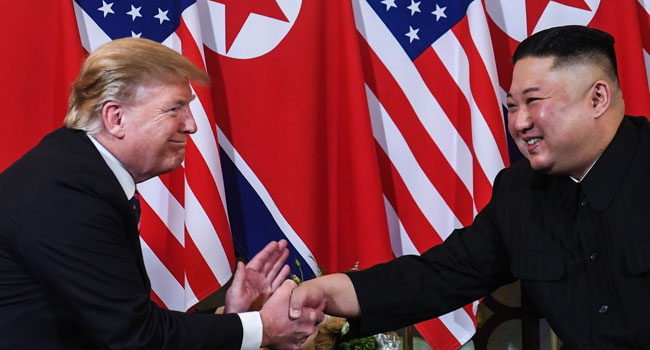 In a sanctions document, the US Treasury has said Kim was born on that day in 1984, which would make him 36, but there is speculation he could be a year or two older.

Seoul’s national security adviser Chung Eui-yong met Trump in Washington on Wednesday and said the former real estate mogul — who in warmer times proclaimed he and Kim had fallen in love — “recalled” it was his birthday.

“President Trump wished Chairman Kim Jong Un a happy birthday and asked President Moon to convey it to him,” Chung told reporters as he arrived back in South Korea on Friday.

The message was delivered “in an appropriate manner”, he added, without explaining how it had been transmitted.

Contacts between the two Koreas are at a standstill, with Pyongyang’s official media repeatedly excoriating the leadership in Seoul.

At a meeting of his ruling party in December, Kim declared an end to Pyongyang’s moratoriums on nuclear and intercontinental ballistic missile tests and threatened a demonstration of a “new strategic weapon” soon.

Trump and Kim have had three meetings since June 2018 but there has been little tangible progress in denuclearising North Korea.

At the 2014 event, Rodman, a heavily tattooed former NBA All-Star, sang the birthday song before the North Korean leader and his wife Ri Sol Ju, as the crowd clapped along.

It was Rodman’s fourth visit to North Korea and he appeared to bow to Kim. 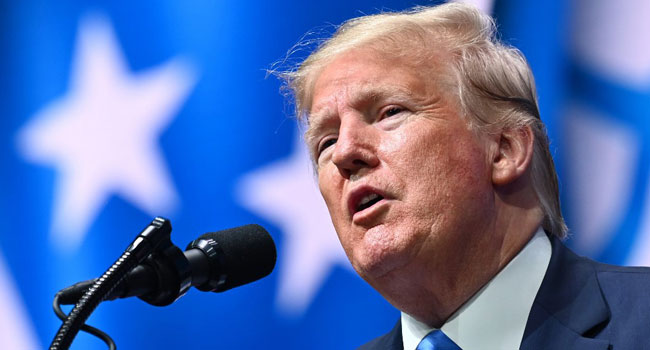 President Donald Trump warned Sunday that North Korea’s Kim Jong Un had “everything” to lose through hostility towards the United States after Pyongyang said it had carried out a major new weapons test.

“Kim Jong Un is too smart and has far too much to lose, everything actually, if he acts in a hostile way,” Trump tweeted in response to the unspecified test at the Sohae space launch center.

The announcement of Saturday’s test came just hours after Trump said he would be “surprised” by any hostile action from the North, emphasizing his “very good relationship” with Kim.

Trump and Kim engaged in months of mutual insults and threats of devastation in 2017, sending tensions soaring before a diplomatic rapprochement the following year.

The pair have met three times since June 2018 but with little progress towards denuclearization. Pyongyang has set Washington a December 31 deadline to make new concessions to kickstart stalled talks.

“North Korea, under the leadership of Kim Jong Un, has tremendous economic potential, but it must denuclearize as promised,” Trump tweeted. “NATO, China, Russia, Japan, and the entire world is unified on this issue!”

Writing that Kim had “signed a strong Denuclearization Agreement” at their June 2018 summit in Singapore,” Trump warned: “He does not want to void his special relationship with the President of the United States or interfere with the U.S. Presidential Election in November.”

A spokesman for North Korea’s Academy of the National Defense Science said Saturday’s “very important test” would have an “important effect” on changing the “strategic position” of North Korea, in a statement carried by the official KCNA news agency.

The statement did not provide further details on the test.

A senior US administration official earlier said Washington had seen reports of a test and was “coordinating closely with allies and partners.”

Trump indicated that military action was still possible when he was asked about Pyongyang on the sidelines of a NATO summit in Britain this week.

North Korea fired back that if the United States used military force it would take “prompt corresponding actions at any level.”

UN diplomats fear that North Korea will resume long-range nuclear or ballistic tests if no progress is made soon in talks with the United States.

Sohae, on North Korea’s northwest coast, is ostensibly a facility designed for putting satellites into orbit.

But Pyongyang has carried out several rocket launches there that were condemned by the US and others as disguised long-range ballistic missile tests.

Kim then agreed to shutter the Sohae site during a summit last year with South Korean President Moon Jae-in in Pyongyang as part of trust-building measures.

North Korea’s nuclear and ballistic missile programs remain intact and Pyongyang is using airports and other facilities to shield its weapons from possible US military strikes, according to a UN panel of experts.

The panel said in a report seen by AFP on Tuesday that sanctions against North Korea were “ineffective,” with Pyongyang still able to acquire illegal shipments of oil products, sell banned coal and violate an arms embargo.

“The panel found that the DPRK is using civilian facilities, including airports for ballistic missile assembly and testing with the goal of effectively preventing ‘decapitation’ strikes.”

The confidential report was sent to the Security Council as President Donald Trump prepares for a second summit this month with leader Kim Jong Un that the United States hopes will yield concrete progress in dismantling Pyongyang’s weapons programs.

The Trump administration has led the drive at the United Nations to impose a series of tough economic sanctions on North Korea in response to its nuclear tests and missile launches in 2017.

But North Korea has resorted to illegal transfers of oil, fuel and coal using a network of ships at sea to circumvent the UN-imposed measures aimed at depriving Pyongyang of revenue to build up its weapons programs.

“These violations render the latest United Nations sanctions ineffective by flouting the caps on the DPRK’s import of petroleum products and crude oil as well as the coal ban imposed in 2017,” said the report.

“The panel found that DPRK ports and airports are used for rampant violations of the resolution ranging from illegal oil imports and coal exports to the smuggling of bulk cash by DPRK nationals,” said the report.

North Korea continues to violate an arms embargo and attempted to supply light weapons to Syria, the Huthi rebels in Yemen, Libya and Sudan, it added.

“Financial sanctions remain some of the most poorly implemented and actively evaded measures of the sanctions regime,” said the panel.

The panel’s findings were in line with US intelligence assessments that North Korea is unlikely to scrap its weapons programs but may offer to scale back its activities to win sanctions relief.

US special envoy for North Korea Stephen Biegun will hold talks in Pyongyang on Wednesday to press for progress and steps that could be touted as success during the upcoming summit, which is likely to take place in Vietnam.