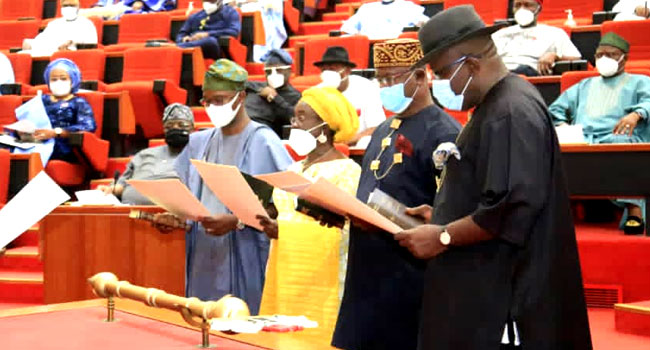 The Senate President, Ahmad Lawan, has sworn in four new lawmakers into the red chamber of the National Assembly.

The newly inaugurated lawmakers were returned elected by the Independent National Electoral Commission (INEC) in the bye-elections conducted to fill the vacant seats in the Senate.

Their inauguration took place shortly after Senator Ibrahim Oloriegbe (Kwara Central) moved for the adoption of votes and proceedings for Thursday last week, and the motion was seconded by Senator Sandy Onuh (Cross River Central).

In his remarks, Senate President Lawan noted that the lawmakers in the chamber have designed and devoted themselves to working for Nigerians.

According to him, the Ninth Senate works in a very bipartisan fashion as three – the All Progressives Congress (APC), the Peoples Democratic Party (PDP), and the Young Progressives Party (YPP) – are represented in the chamber.

“We have done fairly well as an Assembly. We are faced with challenges, but these are surmountable challenges.

“To our colleagues who have just joined us, incidentally at the moment it is a draw. The major thing is we are one,” he said.

The Senate President added, “I want to pray that our countrymen and women will always give their maximum support to the National Assembly in particular and the legislature.

“The National Assembly is made up of human beings and we can make mistakes as human beings but this Ninth Assembly will not cause any disruption in government.”