The Federal Government on Thursday revealed that it is considering forming an alliance with the Democratic People’s Republic of Korea in the exploration of solid minerals.

The Minister of Mines and Steel Development, Musa Sada, said this after receiving a delegation from the republic.

“We have the natural resources and we are asking investors to come in with their funds and skills to be able to help in exploiting these resources,” he said.

Mr Sada said the Ministry of Mines and Steel Development is looking at creating jobs for Nigerians through the use of basic technologies in mining.

“One of the major issues that we have to face is job creation. As basic as the industry is, anybody, even if you didn’t go to school, operate some of the machines. We are targeting job creation through the use of basic technology,” he said.

According to him, North Korea has a lot of technical competence in mining solid minerals especially the manipulation of stones for various purposes and Nigeria has these minerals in excess.

All that is needed is the technical know-how to utilize them for infrastructure and development. 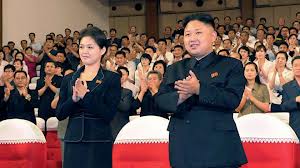 Little is known about Kim, who became the third generation of his family to lead his reclusive country when he assumed power following the death of his father, Kim Jong Il, in December.

Kim Jong Il, known as “Dear Leader” had ruled for 17 years after inheriting power from the country’s founding father, Kim Il Sung, the eternal president and “Great Leader.” Kim Jong Un was granted the title of “supreme leader.” His age is still a source of speculation, though it’s thought he’s in his late 20s.

Recently the leader had been seen alongside a “mystery woman” at a Pyongyang theater to watch a performance of North Korea’s Moranbong band.

That outing wasn’t her only high-profile appearance at the North Korean leaders’ side.

The same woman was seen on state TV a few days later walking a few paces behind Kim as he toured Kumsusan Palace in Pyongyang, then standing to attention at Kim’s side as they and top military officials paid tribute to his grandfather Kim Il Sung, North Korea’s founding father, on the anniversary of his death.

The expectations that North-South relations might improve following the Death of the North Korea Leader Kim Jong Il has been dampened.

North Korea has told the international community not to “expect any change” in the wake of Kim Jong-Il’s death.

The message came in a statement carried by state media and attributed to the powerful National Defence Commission.

“We declare solemnly and confidently that the foolish politicians around the world, including the puppet group in South Korea, should not expect any change from us,” it said.

Kim Jong-Il ruled North Korea since the death of his father Kim Il-sung in 1994.

Under him funds were channeled to the military and North Korea conducted two nuclear tests.

His son, Kim Jong-Un, has been named “Supreme Leader of the party, State and Army”.

The communist state remains technically at war with South Korea and is isolated on the international stage because of its dire human rights record and pursuit of nuclear weapons.

Six-nation talks aimed at ending Pyongyang’s nuclear ambitions – involving the two Koreas, China, the US, Russia and Japan – have been stalled for months.

The North korea flag hoistering atop the world’s third tallest flagpole on the North Korean side of the DMZ is 160 metres (525 feet) tall and flies a 270kg (595 lbs) flag.

The DMZ which is also known as “truce village,”is the only area of the DMZ where South and North Korean soldiers stand face-to-face.

The flag had been at half mast since North Korea’s announcement of the death of its leader Kim Jong-il.

The border has divided the two countries since the Korean War, not only in political ideology, but also in wealth.

Economists estimate that the per capita income in the South is more than 17 times higher than in the North.

South Korea’s economy is now an estimated 40 times bigger than its neighbour’s, it is the world’s most wired society and its popular culture enjoys huge success in Asia and beyond.

In contrast, North Korea can barely feed itself, cannot even do simple overseas bank transactions because of tight international sanctions following a series of missile and nuclear tests, and spends huge effort on building up a personality cult to underpin the ruling dynasty that this week passed to Kim Jong-il’s son, Kim Jong-un.

As Kim the North Korean leader passes on, his youngest son Kim Jong-un has been touted to take conrol of the government but unlike his grandfather and father who ruled alone, it appears Jong-un will have to share power, or at least rely on powerful figures such as his uncle, Jang Song-thaek.
Kim Jong-il’s funeral is scheduled to take place on December 28.