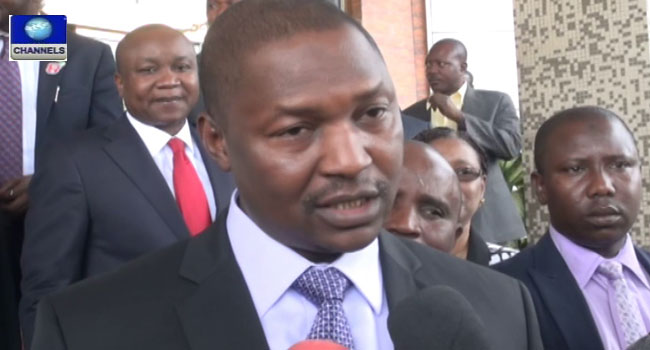 Nigeria’s Attorney General and Minister of Justice, Mr Abubakar Malami, has directed various agencies with prosecuting powers to compile list of pending cases they are currently handling at the various courts.

He said that the list would enable the Ministry determine which of the cases falls within the category of high profile cases to be taken over by the National Prosecution Coordination Committee (NPCC).

Malami’s message was read by the Special Assistant to President Muhammadu Buhari on Research and Special Project attached to the Federal Ministry of Justice, Mr Sylvester Imhanobe.

Mr Imhanobe, who is also the Secretary of the Committee, informed the agencies of the objectives for setting up the prosecution committee.

The spokesman for the NPCC, Comrade Othman Isah, who doubles as the Special Adviser to the Attorney General, listed Agencies present at the meeting to include, the Nigerian Police Force, Department of State Services, Economic and Financial Crimes Commission, Independent Corrupt Practices and other related offences Commission and the Federal Inland Revenue Service.

Mr Malami explained further that for a case to be tagged high profile, it must have overriding public interest elements. He, however, said that he ultimately determines what case is tagged a high profile case.

“The quantum of value of a case and its sensitivity also influences whether a case is a high profile case or not,” the Minister of Justice explained.

According to him, members of the Committee are mainly his aides as well as eight external members selected on the basis of experience and expertise. He further explained that the Heads of Agencies were not part of the NPCC due to their busy schedules.

The Attorney General also hinted that the intention was not to distract the Heads of the Agencies, but to engender smooth synergy between the Committee and the Agencies.

For Cooperation And Synergy

The Special Assistant to the President on Coordination and International Affairs under the Federal Ministry of Justice, Mr Pius Oteh, who chaired the meeting reiterated that it was for the purpose of sensitising the relevant Agencies on the objectives of the National Prosecution Coordination Committee.

He emphasised that the AGF in his wisdom saw the need for coordination and cooperation between the NPCC and these Agencies with prosecuting and investigative powers.

“It was necessary for cooperation and synergy between the Committee and the Agencies consistent with the mandate of President Muhammadu Buhari in the anti-graft war.

“Beyond the synergy and partnership between all concerned, a robust interface between the Agencies is necessary, Oteh said, pointing out that the agencies should take their mandate seriously for a more vigorous and efficient prosecution.

“When it comes to delay in the justice system, every stakeholder has a responsibility. It is a cross cutting issue in which all key players share a responsibility vis-a-vis the judiciary, prosecutors, investigators and even defence counsels. When everyone do their bit, a more efficient and humane criminal justice system will be attained,” he stressed.

Others who represented the Ministry and the Committee at the meeting were Special Assistants to the President, Mrs Juliet Chikaodili Ibekaku (Justice Reforms), Mr Okoi Obono Obla (Prosecution), Mr Kehinde Oginni (Financial Crimes) and a staff of the Ministry, Ms Aisha Bajeh.

Gunmen suspected to be armed robbers yesterday attacked a police check point in Kaduna town, killing one policeman and injuring another officer during a shootout.

Eyewitnesses said the gunmen who were carrying sophisticated guns attacked the policemen at a check point located in Ungwan Dosa area of Kaduna North Local Government.

Confirming the incident, state commissioner of Police, Mr Olufemi Adenaike told Channels Television that one of the policemen who sustained injury during the shootout died at St. Gerald Catholic Hospital in the town, where he was rushed to for treatment, while another officer is said to be responding to treatment.

Although it has not been confirmed what the mission of the gunmen was in the area, he said that the gunmen equally escaped with gunshot wounds.

The attack created pandemonium as residents of the area fled for their safety.

Security operatives have been drafted to the area to maintain law and order.