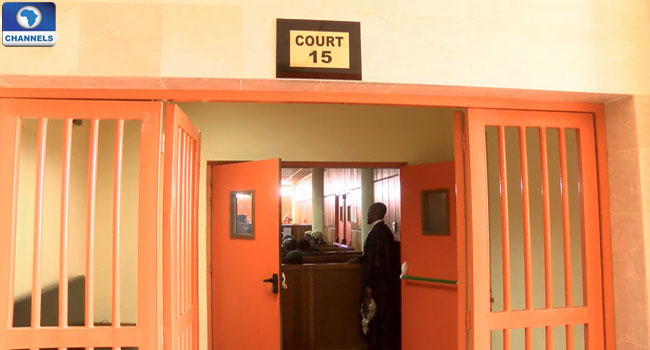 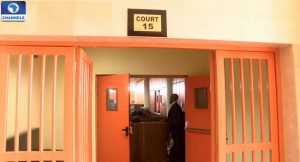 A High Court in Ede, Osun State has reversed its order to remand a former Vice Chancellor of the Obafemi Awolowo University Ile-Ife, Professor Anthony Elujoba, who is standing trial for alleged financial misappropriation, at the Ilesha Prison.

Professor Elujoba and the bursar of the school, Mrs Ronke Akeredolu are now to be further remanded in the Economic and Financial Crime Commission (EFCC) custody, where they have been since last Wednesday.

The presiding judge, Justice David Oladimeji also ordered that the ruling on the bail application earlier scheduled to hold next Wednesday July, 19, be brought forward to Friday, July 14.

The reversal of the orders came after several hours of agitation by students and staff of the institution, who had besieged the court premises demanding immediate release of Professor Elujoba.

The students together with the staff had done everything possible to prevent the prison and EFCC officials from taking the accused persons to the Ilesha Prison, (from deflating the tires of their vehicles, to locking the judge, lawyers and every other person within the court premises inside).

The agitators who had defiled heavy presence of security operatives in the court grounded every activity in the area, leaving commuters plying the road stranded for the hours while the agitation lasted. 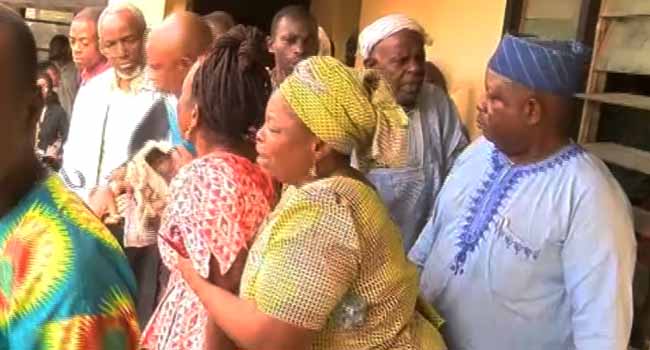 The arraignment of the former Vice Chancellor of the Obafemi Awolowo University (OAU), Professor Anthony Elujoba, has brought tears to the eyes of some supporters who feel Tuesday’s ruling was unjust.

The wife of the former VC was seen in tears following the court’s decision to remand him in prison pending the ruling on the application for bail of himself and the bursar, Mrs Ronke Akeredolu on July 19, 2017.

Some students and staff who disagreed with the ruling began a protest and were seen dragging Mr Elujoba with the Police. 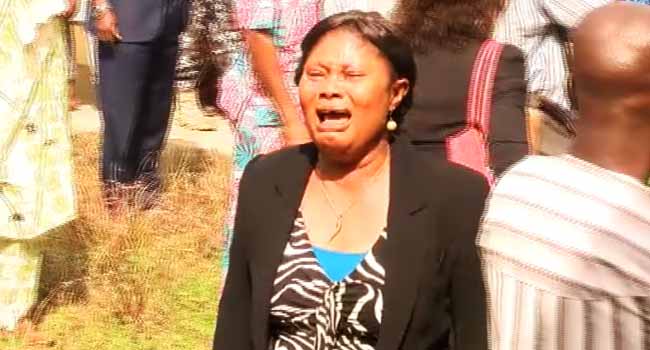 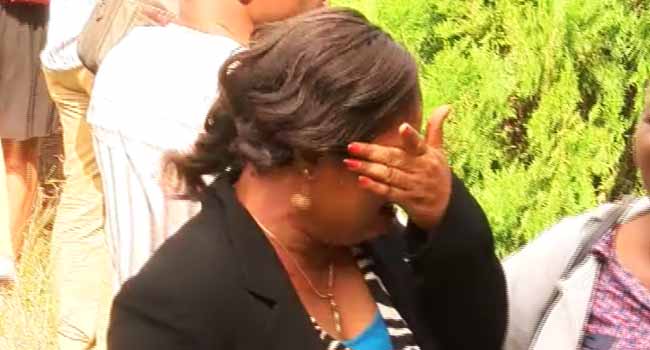 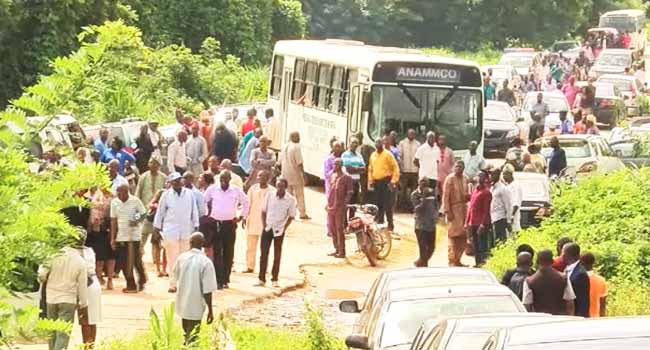 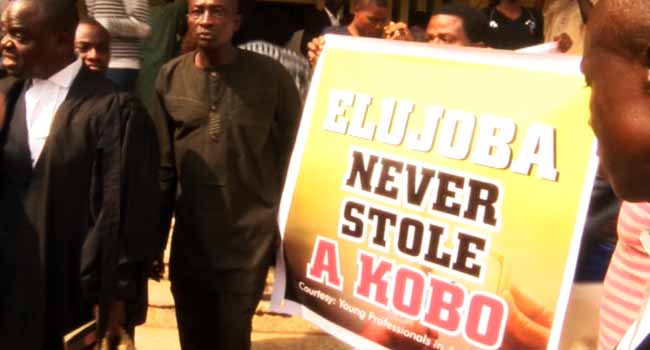 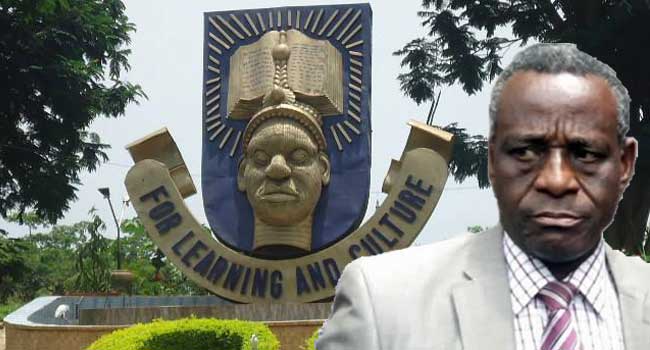 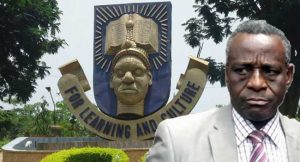 The rubble over the allegation against the acting Vice-Chancellor of Obafemi Awolowo University, Ile-Ife, Professor Anthony Elujoba, appears not be dying anytime soon.

It was revealed to Channels TV correspondent by an insider in the institution who preferred to be anonymous that the Acting Vice Chancellor who is under investigation over alleged diversion of 1.4 billion Naira of the university’s fund, is believed to have violated the rule by drawing the remunerations of a substantive holder of his office.

Prof. Elujoba and the university’s Bursar, Aderonke Akeredolu, were on Tuesday in Ibadan quizzed by the Economic and Financial Crimes Commission over the allegation.

He was appointed acting Vice-Chancellor for a period of six months with effect from July 21.

According to the terms and conditions of the appointment as approved by the Federal Government, Prof. Elujoba’s fringe benefits include N120,000 monthly as furniture allowance.

Investigations however revealed that part of the allegations against him in a petition to the EFCC was that he received over seven million Naira as advance payment of the allowance for the five-year tenure of a substantive vice-chancellor.

The petition alleged that the acting Vice-Chancellor and Bursar diverted monies from the university’s Fixed Assets and Endowment Fund, without approval from the Federal Ministry of Education and the Governing Council of the University, to pay themselves unapproved allowances, including the 7 million Naira as furniture allowance to Elujoba.

Prof. Elujoba and Mrs. Akeredolu, who arrived the Iyaganku office of the anti-graft agency in Ibadan at about 5PM on Tuesday, were quizzed for some hours and released on bail.

Before their arrival at the EFCC offices, scores of workers of the university and supporters had besieged the premises in solidarity with the officials.

When contacted, the EFCC Head of Media in the zone, Ayo Oyewole, declined to give details of the allegations against the acting Vice-Chancellor.

However, he confirmed that he was released on bail while further investigation was continuing.

The spokesman of the university, Biodun Olanrewaju, has however defended the accused officials, arguing that the acting vice-chancellor could not have been involved in financial malpractice as he was not in charge of the university’s finances.

“It is the bursar that is in charge of money, not the acting Vice-Chancellor. This is a man who does not even collect hospitality allowances or security vote as collected by other vice-chancellors,” Mr Olanrewaju said.

He said Prof. Elujoba was brought into the university to stabilise the institution at a time of crisis.

“As acting vice-chancellor, he does the same work as any vice chancellor. Forget about the title, he coordinates the affairs of the university just like a substantive vice-chancellor,” he added.

Insinuating that the development had political undertones, Mr Olanrewaju said Prof. Elujoba had already been recommended by the Senate of the institution as substantive vice-chancellor “with overwhelming majority of 295 votes against 8 votes for his opponent”.

The university’s spokesman also defended the loyalty demonstrated for the embattled vice-chancellor by workers at the EFCC office.

“You could see how all union members of the university stormed the Iyaganku office of EFCC in Ibadan to rally round him. That was to show that the man did not steal or embezzle as alleged,” Mr Olanrewaju stated. 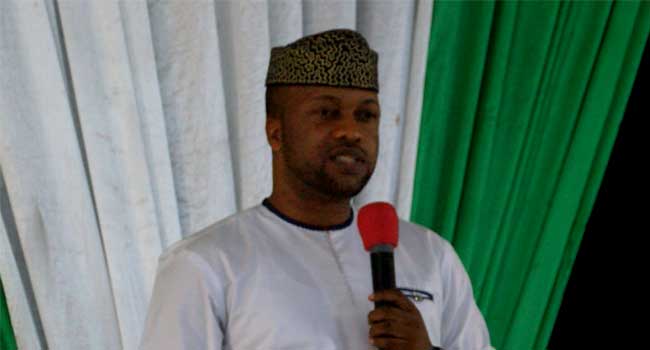 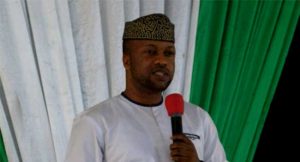 As Nigeria celebrates its 56th Independence Anniversary, the interchange of blame and faults as well as the role of followership in the Nigerian project became the focus of participants at a leadership conference held for campus leaders at the Obafemi Awolowo University (OAU) in Ile Ife, Osun State.

Speakers at the conference agreed that the current economic challenge facing the nation was due to collective misappropriation of the country’s past by both the leaders and the led.

Leading discussions at the conferences, a member of the Osun State House of Assembly representing Ife North State Constituency, Honourable Babatunde Olatunji, said the age-long fantasy of Nigeria as a country of enormous resources had culminated in the coordinated ripping of the nation’s sovereign wealth by its leaders as encouraged by the greed of the followership.

While calling for patriotic commitment from all Nigerians irrespective of social or political class, Mr Olatunji also advocated a change of attitude and a reappraisal of Nigerians’ lust for pleasures.

‎He said: “We need to know that building the Nigeria of our dream is a collective responsibility. There must be purposeful leadership and of course responsible followership.

“Both the government and the governed must come together and realise that Nigeria belongs to all of us and know that what we get out of our country is a function of what we give to it”.

Change Begins With You

The lawmaker stressed that he had been advocating for ‎patriotism and believed that if Nigerians were patriotic in all that they do, the array of problems facing the nation would be a thing of the past. 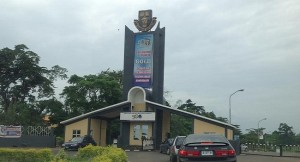 “If you are in position of government and you claim to be patriotic, you will no loot the treasury and find it so hard to believe that change begins with you.

“If we are patriotic about Nigeria, we must be willing to do the right thing to make the nation a better place. That is what patriotism is all about.

“We have all it takes to change what we are experiencing now. We cannot continue to do the same thing we have been doing. Let us change our orientation and our country will be better for us as a people,” Mr Olatunji emphasised.

Participants at the conference, however, sought a bottom up approach to attitudinal change where the change starts from among the followers, since the leadership cadre spring from the followers.

Nigeria’s 56th Independence anniversary is one that Nigerians will live to remember, as the economy has continued to glide south, with the cost of living rising.

The government has promised to address the economic downturn, injecting funds into the economy for capital projects hoping that the economy will bounce back in no time to fulfil promises made to Nigerians during their campaign that saw the All Progressives Congress took power from the Peoples Democratic Party that had ruled the nation for 16 years.

The current government has continued to blame the government of Goodluck Jonathan for the present economic woes of the nation, saying that that administration failed to save for the rainy days. 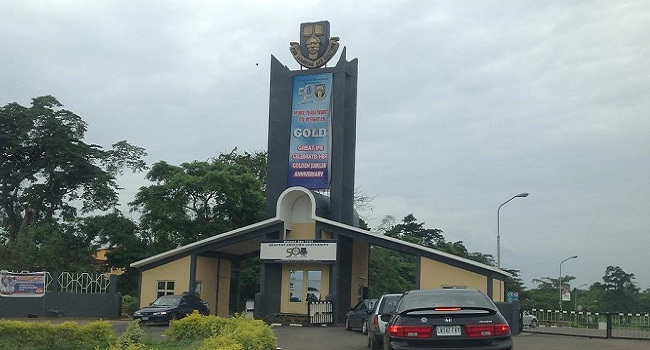 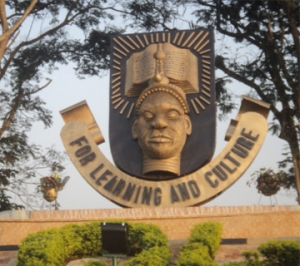 Students and workers at the Obafemi Awolowo University in Ile Ife Osun State are calling on the federal government to set up an investigative panel into what they call the “corrupt activities” of the outgoing Vice Chancellor of the institution, Professor Bamitale Omole.

To show their grievances against Professor Omole, the workers comprising members of the Senior Staff Association of Nigerian Universities (SSANU) and the Non-Academic Staff Unions and students attempted to stall the book launch organised in his honour.

It was less than three weeks to the expiration of the tenure of Professor Bamitale Omole as OAU VC and the protesters gathered in front of the school’s bookshop to disrupt the book launch.

From the book shop, they moved to the OAU Conference Centre, venue of the book launch, dragging the banner of the launch along.

At the conference centre, the aggrieved workers and students were told that the event had been cancelled for security reasons.

Speaking to newsmen, leaders of the unions claimed that they were on the protest to register their grievances against the mismanagement of the institution’s resources and an alleged planned imposition of a new vice chancellor by the outgoing vice chancellor.

They called on the federal government to set up a panel of inquiry to probe the about-to-wind-up administration of Prof Bamitale Omole.

The students also blamed management for the condition of the halls of residence, which they say is deplorable and requires urgent attention.

However, OAU Public Relations Officer, Abiodun Olanrewaju, says all aggrieved unions should channel their concerns to anti-graft agencies saddled with the responsibility with relevance proof if there is any.

In the meantime, the unions have vowed to continue their protests until June 23 when Professor Bamitale Omole is expected to officially vacate his office as the Vice Chancellor of Obafemi Awolowo University, Ile-Ife, Osun State.