The Oba of Lagos, His Royal Majesty, Oba Riliwanu Babatunde Akiolu 1, turns 70 years on October 29, and he has appealed to all those wishing to place advertorials for him, either in the print or electronic media, to forego such plans saying the current atmosphere in the country does not warrant any form of merriment.

In a statement from the Palace, signed by his media aides, Tokunbo Mumuni-Eshilokun and Kunle Odufuwa, His Royal Majesty advised admirers, including individuals, corporate and multi-national organizations, to direct funds meant for such advertorials to charity and join him in prayers for the peace, stability and unity of the country on that day.

The statement said much as the Oba appreciates such outpouring of goodwill, he would advise the people to cancel the programmes. According to the statement,

He noted that the Iga Idunganran Primary Health Care Centre “which has since been put into public use”, still needs quite a number of equipment to bring it to international standard.

The statement also disclosed that N250 million has been collected so far for the Ilupeju Town Hall and Anikantamo Town Hall and Health Centre projects adding that the amount has since been deposited “in a special project account while the total some required is N650 million”.

On the programmes and events lined up by the Royal Palace to celebrate the occasion, the statement said the event would kick off on Saturday, October 26, with the special cleaning of the Palace and its environs which will end on Sunday, October 27.

On Monday, October 29, there would be a Muslim prayer between the hours of 8 a.m. and 10 a.m. in the Palace followed by the installation of the new Iyaloja General of Nigeria, Mrs. Folashade Tinubu-Ojo by His Royal Majesty who would be assisted by members of the Lagos Council of Obas and Chiefs.

The event would be followed by the presentation of the new Olori-Ebi/Overall head of the Bashua Chieftaincy Family in the person of Chief Musiliu Adisa Bashua (SAN). 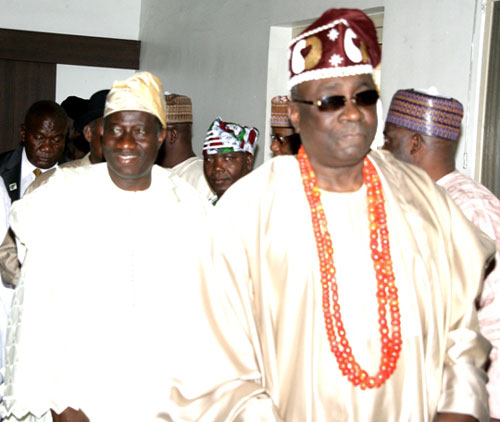 The Oba of Lagos, Oba Rilwan Akiolu has decried the perceived neglect of Lagos state by the federal government, and demanded an urgent redress of what he described as ‘’injustice’’.

The Oba made this known request while receiving the First Lady, Dame Patience Jonathan, in his palace.

The President’s wife, who is on a two-day visit to the state, paid a coutesy visit to the monarch, where she was accompanied by Senator Florence Ita-Giwa and wives of both Katsina and Bayelsa state governors.

The King described Lagos state as a “mini-Nigeria” as it hosts every tribe in Nigerian from across the federation, noting “there are a lot of pressures on the infrastructural facilities available in the state, owing to the daily influx of people from the six geo-political zones.”

Oba Akiolu pleaded with the President, that “the state does not deserve marginalisation” as he stated that “the federal government has not done much for the state.”

He further urged the president to fix all the federal roads in the state, which he described as eye sores.

Described Lagos state as the nation’s economic nerve centre, Oba Akiolu also enjoined the President to release all the property and money due to the state for development.

He warned the President to halt the Boko Haram threat before it spreads to other zones.

Oba Akiolu also advised the President to see Governor Babatunde Fashola (SAN) and his predecessor, Asiwaju Bola Tinubu, as partners in progress, instead of relating to them as members of the opposition.

The First Lady told the King that that she was in Lagos to thank the people of the state for the support they gave to her husband during the last election.

Mrs. Jonathan noted the expressed grievances and promised to convey them to the President.

She also gave the assurance that the President will reciprocate the kind gestures of Lagosians.