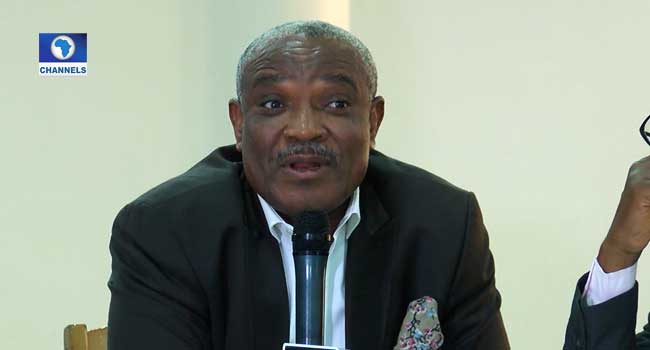 The Independent Corrupt Practices Commission (ICPC) has arraigned a former Chairman of the Special Presidential Investigation Panel for the Recovery of Public Property, Mr. Okoi Obono-Obla, and two others for alleged diversion of funds belonging to the panel.

Mr. Obono-Obla who pleaded not guilty to the 10-count charge preferred against him is accused of conspiring with the other defendants and also using his position to confer an unfair advantage on Aliyu Ibrahim by diverting the sum of  Nineteen Million, Nine Hundred and Ninety-Four Thousand, One Hundred and Eighty-Five Naira (N19, 994, 183.00) received by SPIP from the Nigerian Deposit Insurance Corporation (NDIC).

The said funds were used for the purpose of furnishing SPIP office to the personal account of Aliyu Ibrahim using proxy companies without furnishing the SPIP offices as proposed to NDIC. 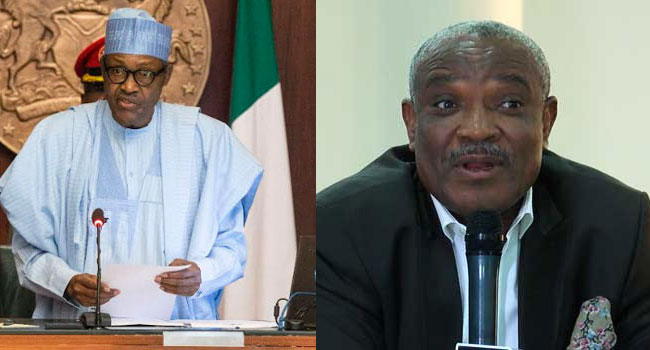 President Muhammadu Buhari has dissolved the Special Presidential Investigation Panel for the Recovery of Public Property (SPIP) as currently constituted with Mr. Okoi Obono-Obla as Chairman.

The President in a statement by his Special Adviser on Media and Publicity, Femi Adesina, directed the Attorney-General of the Federation and Minister of Justice to immediately take over all outstanding investigations and other activities of the SPIP.

Mr Obono-Obla was suspended by the President on August 14, 2019, following an ongoing investigations by the Independent Corrupt Practices Commission (ICPC).

The panel was established in August 2017 by the then Acting President, Prof. Yemi Osinbajo, SAN to investigate specifically mandated cases of corruption, abuse of office and similar offences by public officers.

President Buhari thanks all members of the dissolved panel for their services.

The President looks forward to receiving the final Independent Corrupt Practices and other related offences Commission (ICPC) report on the ongoing investigations of the dissolved panel’s Chairman. President Muhammadu Buhari has suspended the Chairman of the Special Investigation Panel for the Recovery of Public Property, Mr Okoi Obono-Obla.

This was confirmed via the official twitter handle of the Presidency.

According to the Presidency, the suspension is to be in effect until the conclusion of ongoing investigations by the Independent Corrupt Practices Commission (ICPC).

President @MBuhari has directed the suspension from office, with immediate effect, of the Chairman of the Special Investigation Panel for the Recovery of Public Property, Mr Okoi Obono-Obla. (1/2)

The suspension shall be in effect until the conclusion of ongoing @ICPC_PE investigations into a number of cases relating to Mr. Obono-Obla. (2/2) 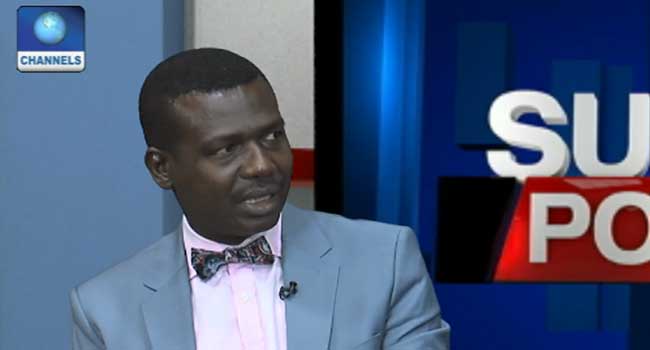 A human rights activist and lawyer, Ebun-Olu Adegboruwa has criticised the interim forfeiture order made by a federal high court for the forfeiture of funds in bank accounts that have not been linked to BVN.

According to Adegboruwa, the order is mindboggling and constitutes a serious setback for the war against corruption.

“This BVN thing is a great embarrassment to us as lawyers and people who love this government for the fight against corruption because, indeed, we support every effort to recover our (stolen) funds,” he said during an appearance on Channels Television’s Politics Today.

Justice Nnamdi Dimgba of the Federal High Court in Abuja gave the interim forfeiture order following the application by the Attorney-General of the Federation and Minister of Justice, Mr Abubakar Malami.

But that decision has sparked a debate and Adegboruwa who is in the ‘against’ camp believes there is a need to separate public funds from private assets.

“Because the Constitution in Section 43, 44 grants every citizen the right to property. Those properties can be movable, they can be immovable. They can be cash, they can be buildings, they can be motor cars,” he said.

Millions of accounts are expected to be affected by the order which also froze the accounts in question and which covers individuals, corporate bodies and government agencies without BVN across the country.

Beyond faulting the grounds for the decision, Adegboruwa is also concerned with the implication it will have if allowed to stand.

“Forfeiture is like a punishment and without an offence – written down, specified and passed on to the person who is concerned, you can’t take my money; it is my property, it is my vested interest, it is my asset,” he said.

He argued that if a customer of a bank fails to comply with the policy of the Central Bank, it is not the Attorney-General that should pursue the case. 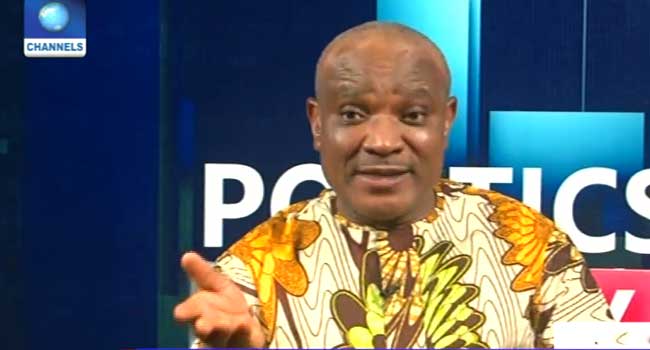 Forty-six million bank accounts have yet to be linked to Biometric Verification numbers and the funds in them will likely be temporarily forfeited to the Federal Government, the Senior Special Assistant to President Muhammadu Buhari on Prosecution has said.

Mr Okoi Obono-Obla, who appeared on Channels Television’s Sunday Politics, believes the Federal Government will be justified should this happen.

His comments come in reaction to an order of interim forfeiture made by Justice Nnamdi Dimgba of the Federal High Court in Abuja.

The judge had ordered a temporary forfeiture of funds and freezing of accounts domiciled in 19 Banks not covered by the Biometric Verification Number (BVN).

The BVN was launched in February 2014 and as of October 8, 2017, 30.5 million bank customers have been issued BVNs with  51 million accounts linked to the numbers.

But for Obono-Obla who is also the Chairman of the Special Presidential Investigation Panel for the Recovery of Public Property, the number of accounts yet to be linked remain alarming.

“From Central Bank statistics, 46 million accounts are yet to be linked with BVN numbers after three years,” he said, stressing however that he doesn’t know how much money the accounts hold.

According to him, those who have not linked their accounts to BVN had violated a CBN policy had themselves to blame.

“Anyone who has not complied with that directive, it means that his account is fraudulent and so whatever is there should go to the government,” he said.

Despite criticism of the decision and arguments that it is drastic, the Presidential aide does not think it is that stringent, especially after the extension of deadlines over time.

For him, “Our laws are not even as strict as what we find in the U.S. In the United States, if you do not operate in a bank account for three years, all the money in that account goes to the federal government of the United States of America.”

Mr Obono-Obla also faulted the argument that it is not everyone that has an account which is not linked to a BVN that is fraudulent, saying that failure to comply with the BVN policy more than two years after it was implemented suggested that the accounts are fraudulent. 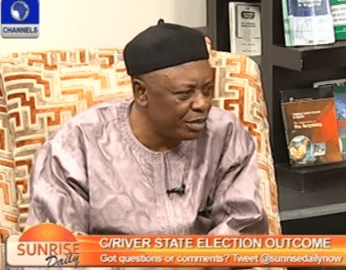 The Chairman of the Cross River Independent State Electoral Commission (CROISEC), Patrick Otu, has denied allegations that he called APC chieftain, Obono Obla, to say that the PDP led state government was pressuring him to bar the APC from contesting.

Following protests by the All progressives Congress (APC) that the recently concluded local council election in Rivers State was ‘a sham’ and ‘mere charade’, Mr Otu has replied stating that people will always debate and argue about elections when they come.

“Merger of parties is a novelty in our political system and so no law contemplates the merger of parties” he said adding that CROISEC does not register parties.

Speaking about APC’s inability to contest in the elections, Otu stated that shortly after APC was registered, INEC “referred us to the electoral act, section 84(6), which states that a newly registered party shall only participate in elections after 90 days”.

CROISEC did not make the electoral act, he said, adding that “we cannot keep a party out of elections”.

On shifting the date of election, in order to allow the APC participate, the CROISEC boss said the commission can only shift elections “when there is an imminent breakdown of law and order”.

He also said only the State Assembly as well as the Chief Executive of the State can raise the issue of shifting elections. “That is what the law states,” he said.

Responding to allegations made by Agba Jalingo, who had observed the election process, Mr Otu denied calling APC chieftain, Obla, informing him of the pressure mounted on him by the PDP, to ensure that APC was unable to contest in the elections.

However, he admitted that the APC had applied for an extension of the election date, stating that “APC did not write to us to extend, referring to any law

Their letter was an appeal”.

He disclosed that NCP, PPA, APGA participated in the election. 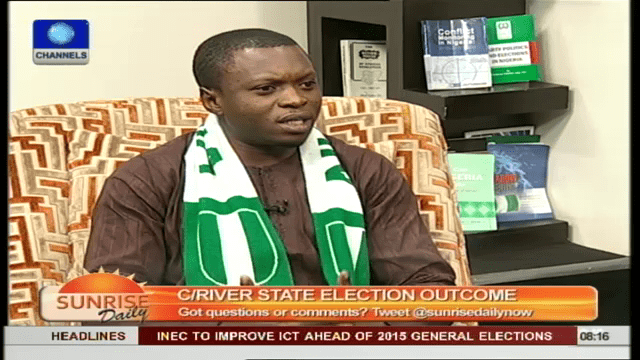 A public affairs analyst, Agba Jalingo, who monitored the local government elections in Cross River state on Friday said that there was no election in the state as the electoral process was ‘a PDP affair” adding that police officers, PDP officials and members of the Cross River Independent State Electoral Commission (CROISEC) were caught thumb printing on ballot papers.

Controversies have trailed the recently concluded the local government elections in Cross River state and Mr Jalingo further fueled the controversy with statements he made while speaking on Channels Television’s Sunrise Daily.

“Even though it was a one party election, PDP officials, the police including CROISEC officials – we caught them on video, thumb printing”

“They were thumb printing by themselves”.

Mr Jalingo, who said election did not hold in some parts of certain local governments, averred that people were unable to vote, due to violence and yet results were announced.

“There were few places in the mainland where people could not vote” he said.

At the Bakassi refugee camp, “there was uproar in the morning. The camp commander said they got some information that some politicians were going to come hire some people to go and do violence.

Ita Giwa came in the morning and move over a thousand of them to Day Spring Island where some of them actually voted.” Those who could not meet the voyage could not vote.

Mr Jalingo who was an observer at the elections said “it was a one party election”.

He said that State Independent Electoral Commissioner “is telling a lie”

The commissioner had said that almost all the other political parties pulled out of the race leading to PDP being the only party standing.

Mr. Jalingo faulted this assertion, adding that “if anybody said the parties pulled out, the person is telling a lie”.

According to him, there are 196 political wards in the state and “the PDP had all of them but seven”.

He disclosed that defunct parties such as ACN and PPA also had their logos on the ballot paper.

“APC, the new party that wanted to contest the election was disenfranchised by CROSIEC”. He continued by saying that the electoral body had called a press conference to say that APC does not qualify to contest because “the cross river local government elections electoral acts says that elections must be conducted 90 days before the expiration of the incumbent tenure and APC was registered later than 90 days”.

He also said that APC chieftain, Obono Obla had revealed that the CROSIEC boss had told him (Obla) via a telephone call that the PDP led state government was pressuring him to bar the APC from contesting.

The CROSIEC chairman, Patrick Otu, then told Obla that APC should write a letter demanding for an extension of time.

The letter was written, however, three days later CROISEC called the conference disqualifying APC from the election.

Mr Jalingo said Otuh, who is yet to confirm the allegation, has been unreachable.

Mr Jalingo stated that the said video is on crossriverwatch.com