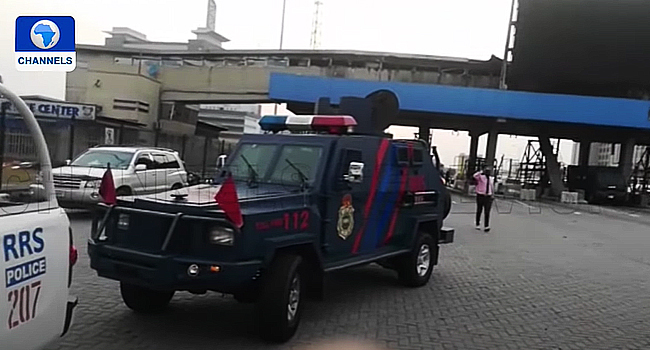 Less than 24 hours to the planned protest at the Lekki Toll Gate by some aggrieved youths, police authorities in the state have launched a show of force exercise to express its disapproval of the protest.

Policemen from the Rapid Response team staged a walk round the toll gate on Friday as they prepare to take positions in the area and other parts of the state on Saturday.

This is also coming less than 24 hours after the Federal and State governments warned youths not to embark on the protest, as they raised concerns that it may be hijacked by hoodlums and lead to lawlessness.

The planned protest is in reaction to the decision of the Judicial Panel of Inquiry and Restitution to return control of the Lekki Toll Gate plaza to its owners, the Lekki Concession Company (LCC).

The toll gate had been one of the major converging points for the protesters in Lagos last year and was also the location for the infamous #LekkiShootings, masterminded by security operatives particularly men of the Nigerian Army.

During the proceedings last Saturday the Chairman of the panel, Justice Doris Okuwobi, gave a ruling allowing the LCC to repossess the toll gate –

But many Nigerians believe that the toll gate should remain closed in honour of those who lost their lives to the incident, hence sparking the new movement, #OccupyLekki.

Meanwhile, a counter-group promoting the hashtag #DefendLagos also scheduled its protest at the same venue.

Earlier today, one of the youths who has been at the forefront of the movement, Rinu Oduala, announced her decision to step down from the judicial panel.

She had been sworn into the panel on October 27, 2020, as youth representatives.

While thanking the government for the invitation and some of the successes recorded from the panel, she, however, stated that she would not be part of a cover-up.

“I will be stepping down from the Lagos Judicial Panel as it is now obvious that the government is only out to use us for performative actions,” Rinu said in series of tweets.

“What I will not do is be part of a cover-up. I am proud that I took the invitation because some of the successes the panel has recorded so far have been incredibly powerful for the people”.