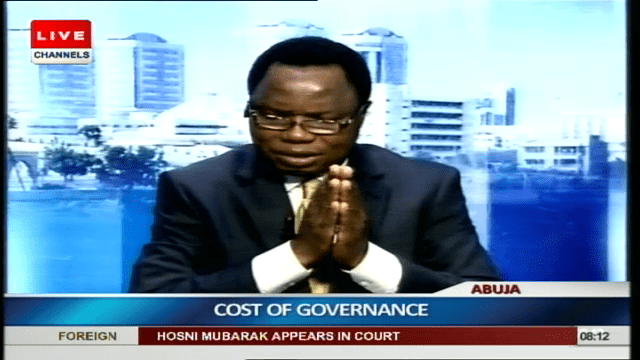 The economist, who noted that “problem is that the country has not actually structured its fiscal and monetary policy in a way that will be growth driven”, spoke from the Abuja studio of Channels Television during the morning flagship programme Sunrise Daily.

He warned that unless the government, “be it executive, legislature or judiciary” implements his recommendations, “they will not have any incentive to make sure the economy grows and develops” adding that “what is happening is what is supposed to be happening”.

He backed the recent statement by the former minister of education, Oby Ezekwesili, on the amount spent by the legislature in the past eight years and “taking the bulk of the recurrent expenditure”.

He also accused the legislative arm of government of allowing the executive to spend far more than they require.

He argued that “whether you like it or not, what is been spent as recurrent, even though when you look at the percentage it is 68 to 70 percent, it is not actually big” noting that “had it been we have grown our economy to a larger extent, then what it means is that what we are spending on our recurrent is little or nothing”.

Explaining the reason behind the disparity, he said New York runs an income and corporate tax generating system while Nigeria relies solely on allocation from external sale of oil.