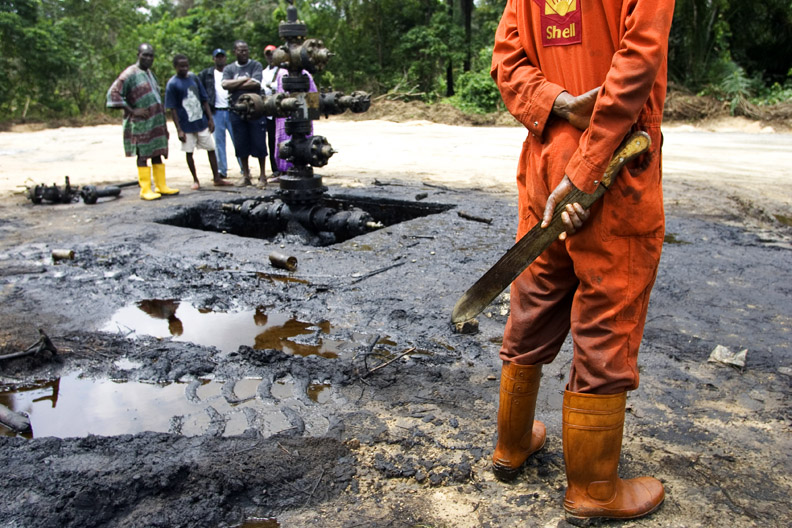 Four Nigerian farmers sued Shell before a Dutch court, accusing the oil giant of destroying their livelihoods in a case that could set a precedent for global environmental responsibility.

The civil suit, backed by lobby group Environmental Action Right/Friends of the Earth, alleges that oil spills dating back to 2005 by the Anglo-Dutch company made fishing and farming in the plaintiffs’ Niger Delta villages impossible.

The four, who are fishermen and farmers, are seeking unspecified compensation and argue they can no longer feed their families because the area has been polluted with oil from Shell’s pipelines and production facilities.

Shell says the pollution was caused by oil thieves and that it has played its part in cleaning up.

“The real tragedy of the Niger Delta is the widespread and continual criminal activity, including sabotage, theft and illegal refining, that causes the vast majority of oil spills,” the group said in a statement.

Friends of the Earth said it hopes the case – set to last a day during which attorneys for both sides will present arguments before the judges retire to give their verdicts next year – will set a precedent and lead to “an end to the corporate crimes committed by oil giants like Shell in Nigeria and around the world”.

With around 31 million inhabitants, the Niger Delta, which includes the Ogoniland region, is one of the top 10 wetland and coastal marine ecosystems in the world and is a main source of food for the poor, rural population.

It’s not only environmental groups who have been critical of Shell’s Nigerian operations.

Last year, the United Nations said in a report the government and multinational oil companies, particularly Shell, were responsible for 50 years of oil pollution that had devastated the Ogoniland region.

In one community near an oil pipeline, drinking water was contaminated with benzene, a substance known to cause cancer, at levels over 900 times above the World Health Organization guidelines.

Shell also faced legal action this month in the United States, where the U.S. Supreme court is hearing a case in which Nigerian refugees accused it of aiding the Nigerian military in the torture and killing environmentalists in the 1990s.

The government and oil firms have pledged to clean up the region and other parts of the Delta, but residents say they have seen very little action.
Royalty payments from oil firms and the sharing of federal oil revenues mean state governments in the Niger Delta have larger budgets than many West African nations, but endemic corruption has meant that little development has been achieved.

Shell Petroleum Development Co (SPDC) is the largest oil and gas company in Nigeria, with production capacity of more than 1 million barrels of oil equivalent per day. It operates a joint venture with the Nigerian National Petroleum Corp and other oil companies including Total SA subsidiary Elf Petroleum Nigeria Ltd.