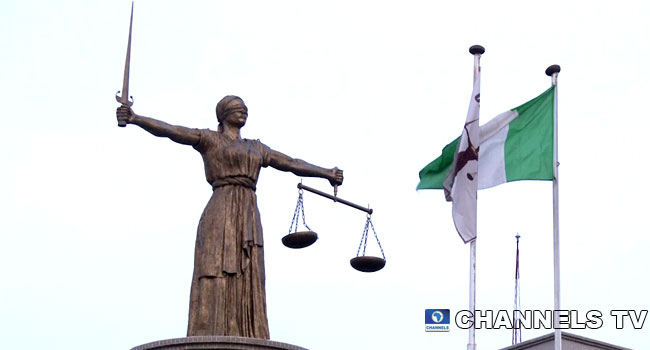 The Federal High Court in Abuja on Monday ordered the transfer of Soku oil field from Bayelsa State to its rightful owner, Rivers State.

Delivering judgment in a suit instituted by Rivers State, Justice Inyang Ekwo, ordered the National Boundary Commission to rectify the error in its 11th Edition of Administrative Map which designated San Bartholomew River as the boundary between the two states, instead of River Santa Barbara.

The error was said to have surfaced in the 11th Edition of Administrative Map produced by the NBC in 2002.

The NBC was said to have in its letter dated July 3, 2002 in response to Rivers State government’s protest admitted its mistake and promised to rectify it in the 12th edition of the administrative map.

The Supreme Court in 2012 ruled in favour of Rivers State and ordered the rectification of the error.

By August 2019, when the mistake had yet to be corrected, Rivers State Government instituted a suit before the Federal High Court in Abuja solely against the NBC seeking an order of mandamus compelling it to correct its error.

Granting the plaintiff’s prayers in his judgment, Justice Ekwo ordered the commission to immediately produce the 12th edition of the Administrative Map restoring River Santa Barbara as the inter-state boundary between Rivers and Bayelsa states, as it was in 1996 when Bayelsa State was carved from Rivers State.

He added that the commission was duty-bound to obey the July 10, 2012 judgment of the Supreme Court which had affirmed River Santa Barbara as the boundary between the states, by immediately correcting its self-admitted error of designating River San Bartholomew as the boundary.

He also ordered that the judgment be served on the relevant statutory bodies, especially, the Revenue Mobilisation Allocation and Fiscal Commission and the office of the Accountant-General of the Federation for them to immediate recompute the amount of oil revenue accruable to it with the transfer of the Soku oil field to rivers state. 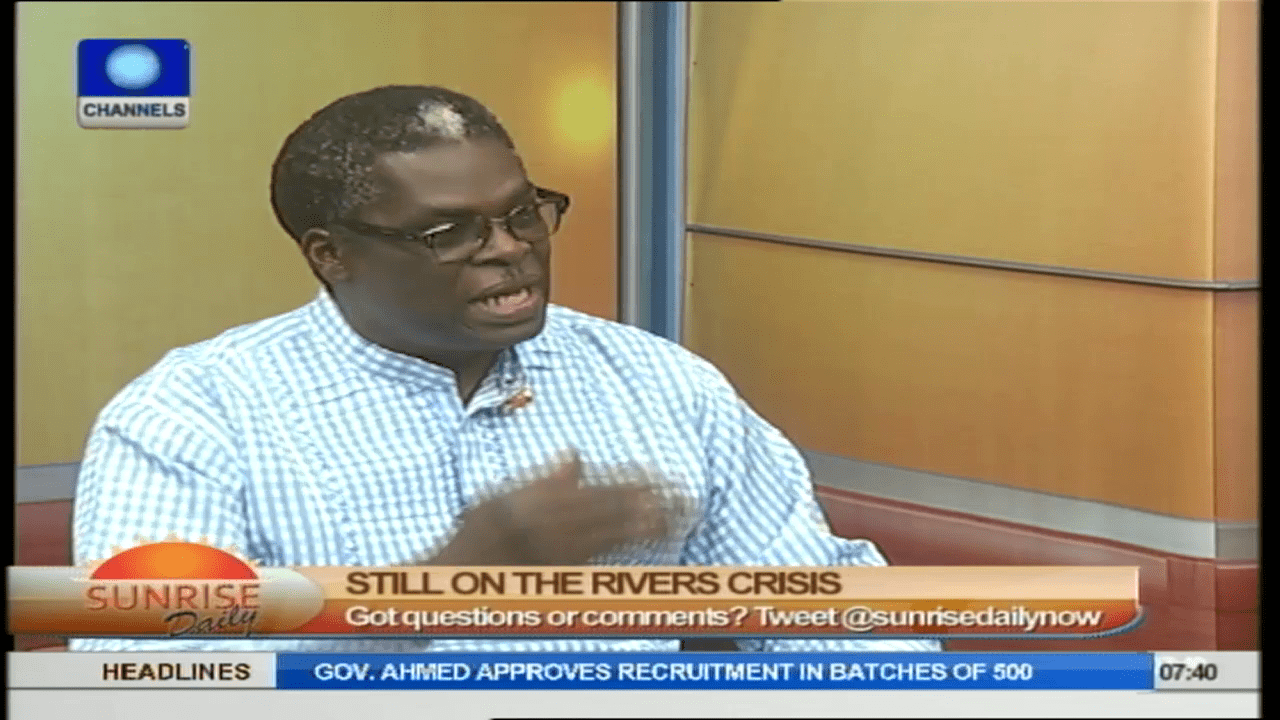 The Coordinator of the Save Rivers Movement, Igo Aguwa, has accused the Rivers State Police Command of causing political imbalance in the state and allowing itself to be used as an instrument of impunity against the Governor Chibuike Amaechi’s administration.

Speaking on Sunrise Daily, Mr Aguwa traced the history of such situations to 1965, “when the Akintola led Action Group refused that the NCNC campaign in western Nigeria. In 1966 thereafter, there was a coup. You remember also in 1982, we had Adewusi as the Inspector General of Police, where the mobile police was used which led to the acronym, Kill And Go.”

He alleged that the Police Command led by Joseph Mbu, disrupted the inauguration of the NGO and also refused to provide security when hoodlums raided the rally in Khana local government because they were loyal to the opponents of the State Governor, who had staged rallies to promote the leader’s weaknesses in office.

“We believe that everybody should have a level playing field where people can sell their programme, their ideas and let the electorate decide.”

“We are only sensitising on the programmes, the positives and even receiving criticisms to act better,” he said.

CP Mbu had accused the group of campaigning without permission from the electoral umpire, INEC, but according to the former House of Reps member, campaigning as defined in the Electoral Act “talks about people campaigning for elective positions.

“That does not mean that the parties will be docile until anytime there’s an election.”

He continued by saying: “It’s getting to the election period, let’s face it. That is why the Grassroots Development Initiative (GDI) has been going around in Rivers State, selling the negative ideas of the government and highlighting the weak points” adding that “nobody is perfect.”

“In that same way, Save Rivers Movement is going around highlighting the positive parts of the government so that you don’t have only the negative perceptions out there in the market.”

Aguwa expressed fears that “what is happening in Rivers state is capable of undermining democracy in Nigeria.”

He admitted that the SRM was on a campaign to neutralize the perceptions being spread by Governors Amaechi’s opposition. “The SRM believes that the government has done well and our ideal is on promoting good governance,” he said.

Asked why the group is carrying out political activities using the NGO as cover, Mr Aguwa said “the truth of the matter is, an NGO could be politically inclined, could be health inclined. It could have any inclination but the important thing is we are not sponsored by government.”

He added that “it is within our rights within the constitution to have that NGO.”

He advocated that the group be given a level playing field as the State Police Command led by Joseph Mbu, had given protection to the opposition group, GDI, the same day the SRM rally was disrupted.

“The field is not level. What is titling the field right now is the impunity of the police,” he said.

He countered arguments that political gatherings are banned until INEC gives permission, adding that only campaigns for political offices are not allowed.

He stated that the bad blood between the Police Command and the group was a recent development as he had met with the Police Commissioner, as a friend, before the Obiakpor rally which was disrupted. “There was no indication that that would happen,” he added.

The Chairman of the Senate Committee on Rules and Business, Senator Ita  Enang has said the Supreme Court’s ruling  in July in the case of the  seventy oil  wells jointly claimed  by Cross River and Akwa Ibom states, did not cede the oil wells to Akwa Ibom because the wells  were already within Akwa Ibom’s territory.

Senator Enang who was speaking on our breakfast show, Sunrise Daily, said with the ceding of the Bakassi Peninsula to Cameroon, Cross River had become land locked and was no longer a littoral state. 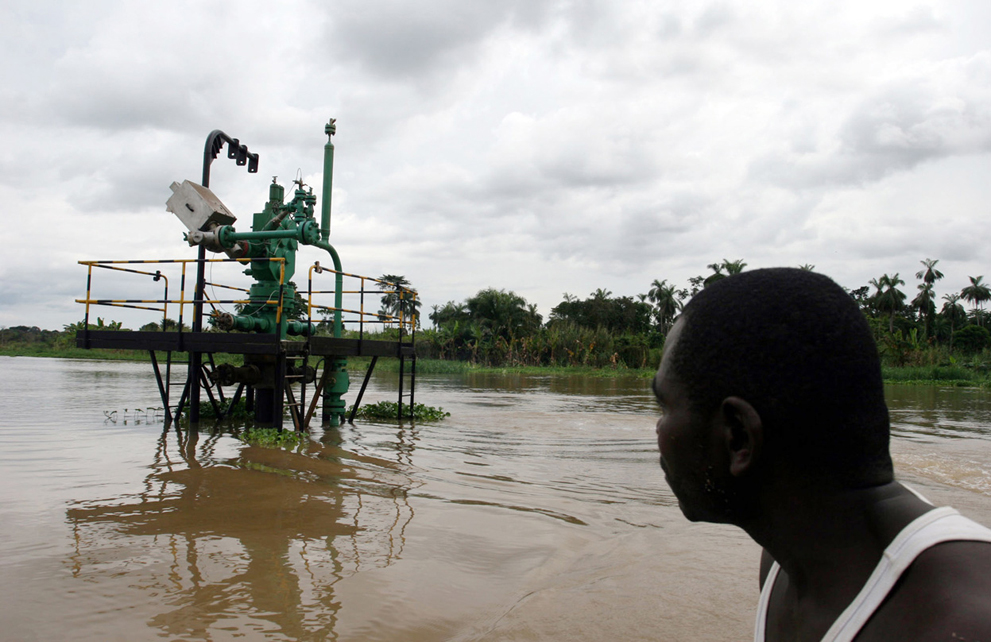 The Supreme Court on Tuesday conferred on Akwa Ibom State, the ownership of the 76 oil wells along the Atlantic Ocean, ruling that Cross River State has lost its claim to being a littoral state.

According to the Court, Cross River State lost the right of an oil producing state when the federal government under the leadership of former President Olusegun Obasanjo handed over portions of the Bakassi peninsula to Cameroun.

The seven justices of the court headed by Dahiru Musdapher, in their ruling, submitted that the Revenue Mobilisation, Allocation and Fiscal Commission (RMFAC) was right in attributing the oil wells to Akwa Ibom at the inter-agencies meeting.

Justice Olufunlola Adekeye, who read the lead judgment, which was unanimous, dismissed the appeal by Cross River State as lacking in substance and merit, insisting that the agreement which initially gave the state rights to the 76 oil wells was upturned by the handing over of Bakassi to Cameroon.

“The facts before the court do not support the claim of the plaintiff to being a littoral state. A non-littoral state cannot claim oil wells offshore as she has no maritime territory. The plaintiff has no maritime territory since the cessation of Bakassi Peninsula and the Cross River estuary which used to be part of the state prior to August 2008. The present position of the plaintiff cannot be blamed on any government agency particularly the National Boundary Commission and the Revenue Mobilisation, Allocation and Fiscal Commission, RMAFC.

“This court cannot because of the influx of refugees from Bakassi into Cross River State, give a legislative judgment. The government of Nigeria has a means of providing for the social needs of the people of Cross River State faced with the social problems thrust on the state due to the cessation of the Bakassi Peninsula to the Cameroun,” the court ruled.

The 76 oil wells had before the judgment of the International Court of in Justice in Hague belonged to Bakassi Local government area of Cross River state.

Bakassi was however handed over to Cameroun on the order of the International Court of Justice as the new owner of the oil rich area after its victory in a boundary legal battle with Nigeria.

However, the Supreme Court said that Akwa Ibom being a littoral state with its boundary directly touching the sea remains the only state that can lay claim and remains the rightful owner of the 76 oil wells in line with the International law.

The Cross River State governor, Liyel Imoke has faulted to the judgement of the Supreme Court which handed over 76 oil wells to Akwa Ibom State.

Mr Imoke said: “As a wronged but law-abiding people, we had hoped for justice. We had hoped for a dispensation of justice that would restore our belief in the timeless saying by the iconic American civil rights leader, Dr. Martin Luther King Junior that “the arm of the moral universe still bends towards justice.”

He said that the judgment differed from the opinion of the people but noted that justice could only be delayed and not denied.

“We maintained our peace and dignity even in the face of what could easily have provoked unprecedented violence and reprisals. We hoped for justice from the highest court in the land. But our hope was dashed. My dear brothers and sisters, our spirit will never be broken,” he said.

The Akwa Ibom State governor, Godwill Akpabio, who also spoke to journalists after the judgment, said had the apex court ceded the 76 oil wells to Cross River State, the oil well would have automatically been transferred to Cameroun.

He said: “we are happy that the Supreme Court did justice today, but we hereby extend hands of fellowship to our sister state, we have always lived amicably with one another, and we are committed towards ensuring that the relationship that had always existed between the two states is not jeopardized in any way.”