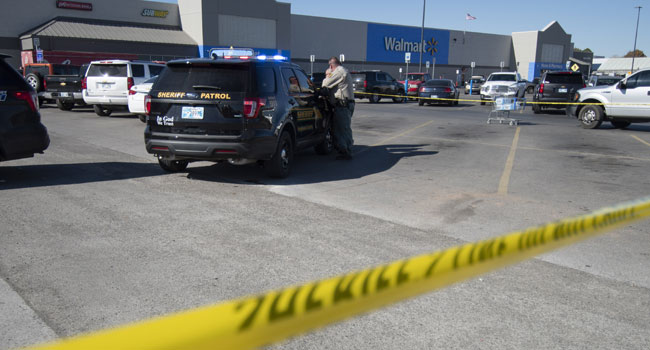 Three people were killed in a shooting early Monday outside a Walmart store in Oklahoma, including the assailant, police said — the latest in a string of deadly gun attacks at the popular supermarket chain.

Danny Ford, the police chief in the town of Duncan, said the shooting — an apparent domestic dispute — took place shortly before 10:00 am (1600 GMT) in a parking lot in front of the store.

“We have three individuals that are deceased. We have two white males and a white female. Two of the victims are inside the vehicle, one is outside the vehicle,” said Ford.

A handgun was also found at the scene, police said.

Witnesses told local news channels that the shooter approached his victims while they were inside the vehicle, opening fire on them.

He then turned his weapon on himself when a fourth man reportedly pulled out a firearm and challenged the shooter, they said.

Family members at the scene said the shooting was a domestic dispute between a husband and his wife, a local Fox News affiliate reported.

A Walmart spokeswoman told Fox that no staff members were involved in the incident in Duncan, a town of 22,000 inhabitants some 75 miles (120 kilometres) south of Oklahoma City, the state capital.

Schools in the area had been placed on lockdown temporarily before being given an “all clear” by local police, the local school district said in a statement.

At the start of this month, a new permitless carry law came into effect in the central US state, allowing anyone over 21 and without a felony conviction to carry a gun without a permit or a license.

A gunman killed 22 people in a Walmart store in August in El Paso, Texas, while another Walmart store in Mississippi was the scene of a shooting in late July when a disgruntled employee killed two co-workers and wounded a police officer.

In the El Paso shooting, the 21-year-old gunman said he had launched the deadly attack in response to what he called a “Hispanic invasion” of Texas.

Walmart said in the wake of the two shootings inside its stores within a week of each other that it would limit sales of guns and ammunition. 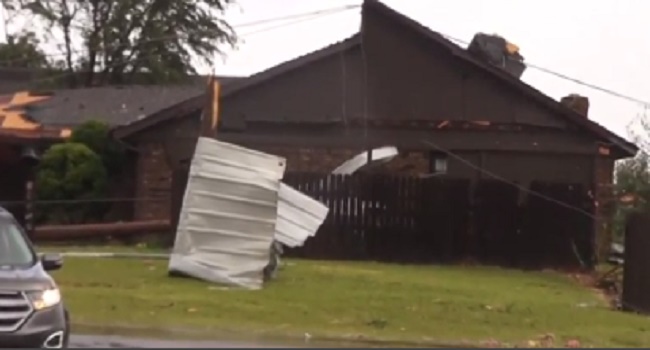 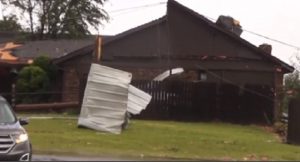 Tornados touched down in Texas, Oklahoma and Wisconsin on Tuesday leaving a trail of destruction in their path, local media reported.

At least one person died when a twister tore through a mobile home part Barron, Wisconsin, local authorities said.

Elk City, Oklahoma bore the brunt of the damage, with dozens of homes visibly destroyed after a tornado ripped through the small city, an NBC affiliate station reported.

Another tornado was captured on video near Mclean, Texas, though no injuries or significant damage were immediately reported.

Forecasters say more strong winds and hail are expected throughout the region. 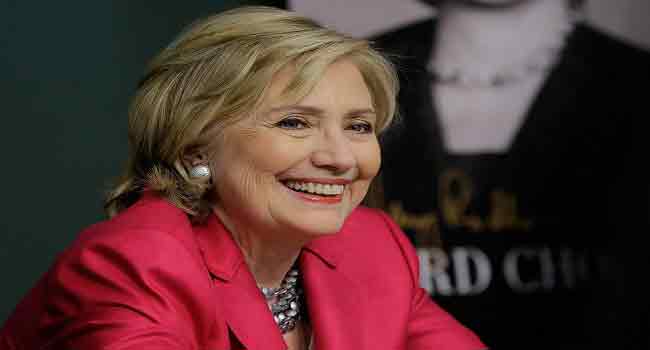 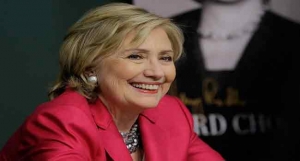 It seems democrat Hillary Clinton, and republican Donald Trump may both emerge as their party’s candidates soon, as both have won the most states in Super Tuesday vote.

Alabama, Georgia, Tennessee and Virginia were among the states where both triumphed.

Mr Trump was defeated by his closest opponent, Ted Cruz in Texas and Oklahoma.

Super Tuesday sees 11 states voting on the biggest single day ahead of the November 8 presidential election. 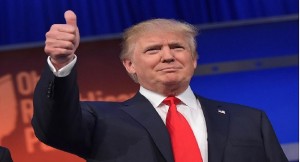 In her victory speech, Mrs Clinton seemed to already be looking towards a potential presidential race against Donald Trump, saying: “the stakes in this election have never been higher and the rhetoric we are hearing on the other side has never been lower.”

Donald trump, on his part, insisted that he was a “unifier” who can put internal fighting in the Republican Party behind him to focus on a general election race against Mrs Clinton. 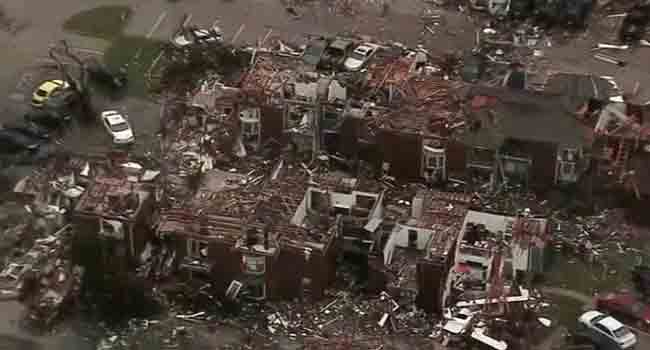 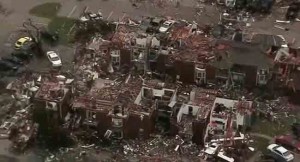 New tornadoes have buffeted the US State of Texas killing 11 people, and raising the death toll to 29 in a week of storms in several US states.

Five people in cars were probably blown off a motorway in Garland, near Dallas. Another three bodies were found in nearby towns.

Weather officials are predicting that Texas and Oklahoma could suffer a “historic blizzard”, bringing up to 16in (41cm) of snow.

The storms across Southern US have been unusually powerful for winter.

Garland Police believed that “winds from a tornado that passed through” the town late on Saturday were the cause of car accidents. 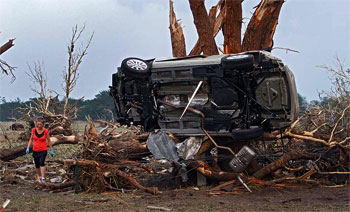 At least 91 people, including 20 children, were feared killed when a 2 mile wide tornado tore through an Oklahoma City suburb, trapping victims beneath the rubble as one elementary school took a direct hit and another was destroyed.

President Barack Obama declared a major disaster area in Oklahoma, ordering federal aid to supplement state and local efforts in Moore after the deadliest U.S. tornado since one killed 161 people in Joplin, Missouri, two years ago.

There was an outpouring of grief on the school’s Facebook page, with messages from around the country including one pleading simply: “Please find those little children.”

Another elementary school, homes and a hospital were among the buildings leveled, leaving residents of the town of about 50,000 people stunned at the devastation and loss of life.

The Oklahoma medical examiner said 20 of the 91 expected to have been killed were children. The office had already confirmed 51 dead and had been told by emergency services to expect 40 more bodies found in the debris, but had not yet received them.

At least 60 of the 240 people injured were children, area hospitals said.

“We thought we died because we were inside the cellar door … It ripped open the door and just glass and debris started slamming on us and we thought we were dead to be honest,” Ricky Stover said while surveying the devastated remains of his home.

Moore was devastated with debris everywhere, street signs gone, lights out, houses destroyed and vehicles tossed about as if they were toys.

Rescuers were searching for survivors throughout the swath of devastation into the early hours of Tuesday, while the dangerous storm system threatened several southern Plains states with more twisters. Severe weather was expected through the night from the Great Lakes south to Texas.

Speaking outside Norman Regional Hospital Ninia Lay, 48, said she huddled in a closet through two storm alerts and the tornado hit on the third.

“I was hiding in the closet and I heard something like a train coming,” she said under skies still flashing with lightning. The house was flattened and Lay was buried in the rubble for two hours until her husband Kevin, 50, and rescuers dug her out.

“I thank God for my cell phone, I called me husband for help.”

Her daughter Catherine, seven, a first-grader at Plaza Towers Elementary School, took shelter with classmates and teachers in a bathroom when the tornado hit and destroyed the school. She escaped with scrapes and cuts.

The National Weather Service assigned the twister a preliminary ranking of EF4 on the Enhanced Fujita Scale, meaning the second most powerful category of tornado with winds up to 200 mph.

Witnesses said Monday’s tornado appeared more fierce than the giant twister that was among the dozens that tore up the area on May 3, 1999, killing more than 40 people and destroying thousands of homes. That tornado ranked as an EF5, meaning it had winds over 200 mph.

The 1999 event in Oklahoma ranks as the third-costliest tornado in U.S. history, having caused more than $1 billion in damage at the time, or more than $1.3 billion in today’s dollars. Only the devastating Joplin and Tuscaloosa tornadoes in 2011 were more costly.

The National Weather Service Storm Prediction Center provided the town with a warning 16 minutes before the tornado touched down at 3:01 p.m. (4.01 p.m. EDT), which is greater than the average eight to 10 minutes of warning, said Keli Pirtle, a spokeswoman for the center in Norman, Oklahoma.

The notice was upgraded to emergency warning with “heightened language” at 2:56 p.m., or five minutes before the tornado touched down, Pirtle said.

The U.S. Federal Aviation Administration (FAA) imposed a temporary flight restriction that allowed only relief aircraft in the area, saying it was at the request of police who needed quiet to search for buried survivors.

Briarwood Elementary School, which also stood in the storm’s path, was all but destroyed. On the first floor, sections of walls had been peeled away, giving clear views into the building; while in other areas, cars hurled by the storm winds were lodged in the walls.

Across the street, people picked through the remains of their homes.

The number of injured as reported by several hospitals rose rapidly throughout the afternoon.

Oklahoma University Medical Center alone was treating 65 patients, 45 of them children, though it was no longer expecting a further mass influx of casualties, spokesman Scott Coppenbarger said.

“The whole city looks like a debris field,” Glenn Lewis, the mayor of Moore, told NBC.

“It looks like we have lost our hospital. I drove by there a while ago and it’s pretty much destroyed,” Lewis said.

The massive twister struck at the height of tornado season, and more were forecast. On Sunday, tornadoes killed two people and injured 39 in Oklahoma.