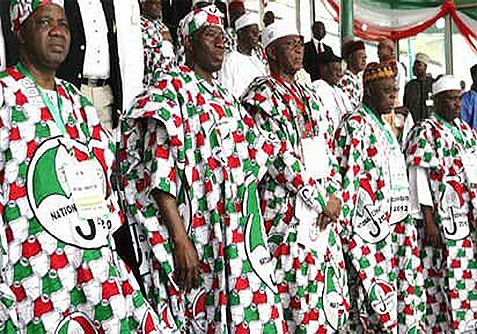 The Board of Trustee (BoT) of the Peoples Democratic Party (PDP) on Tuesday failed to reach a consensus on who would replace former President Olusegun Obasanjo as its chairman.

Efforts to elect a new BoT chairman ended in a stalemate following the refusal of the board’s secretary, Walid Jibrin, to step down.
Subsequently, the party constituted a six-man special committee to properly align the membership of its board of trustees with its relevant constitutional provisions, in order to enhance the legitimacy of the outcome of the eventual election of a new bot chairman.

Briefing journalists after the meeting of the BoT, a former National Secretary of the party and Nigeria’s ambassador to Canada, Ojo Maduekwe said the decision has become necessary for the party to continue to reinvent, remain united, forward looking in the best interest of Nigerians.

The committee has three weeks to submit its report.

Mr Obasanjo, who resigned as the PDP BoT Chairman, was conspicuously absent on Tuesday night as the party tried to find his replacement. No reason was given for his absence.

Tuesday’s meeting of the PDP BoT started at about 8.25 pm with the arrival of President Goodluck Jonathan along with Vice-President Namadi Sambo, Senate President David Mark, Speaker of the House of Representatives, Aminu Tambuwal, the National Chairman of the party, Bamanga Tukur, and the Chief of Staff to the president, Mike Oghiadomhe.

Josephine Anenih, Katsina State Governor, Ibrahim Shema, Hassan Adamu and PDP National Secretary, Olagunsoye Oyinlola, had told reporters before the meeting started that the expectations of the party’s BoT members were to select a chairman that would carry all members of the party along and assist in repositioning the party.