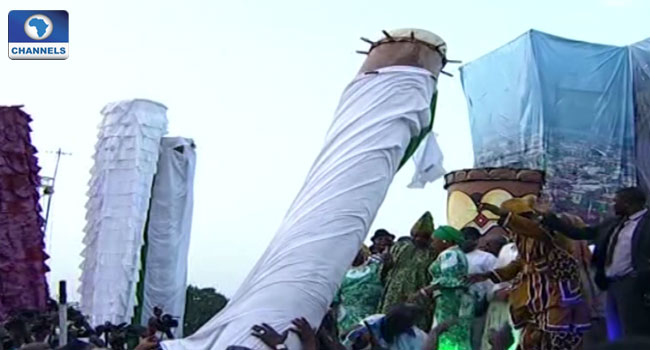 A member of the All Progressives Congress (APC) in Nigeria, Mr Olorunimbe Mamora, says the party is yet to decide its presidential candidate for the 2015 general elections, blaming opposition parties for speculations that the Party was fielding two Muslims as President and Vice.

He told Channels Television on Sunday that the party members would decide who the candidates would be.

“The issue of who will get the party ticket is still speculation and some of these claims of Muslim-Muslim ticket are being engineered by the opposition party.

“It is the totality of membership of the party that will decide,” Mamora said.

The former Senator representing Lagos State also said he was not aware of any agreement that had given General Mohammed Buhari the mandate of the party, as a presidential candidate.

On the party’s chance of winning the 2015 election, he said: “Judging by the tremendous goodwill that the APC has on ground right now, if we are to go by that, I will tell you that the Peoples Democratic Party (PDP) is a goner come 2015.

“Nigerians are happy now that they have an alternative which is the APC”.

He insisted that the PDP controlled Federal Government had not justified being in office for so long. The PDP has been in the seat of power in Nigeria since 1999 and the opposition party says the part is not delivering the dividends of democracy to Nigerians.

Recently, there was a rebasing of the Nigerian economy, resulting to the emergence of Nigeria as the largest economy in Africa ahead of South Africa.

But for Mr Mamora, the rebasing of the economy was not enough.

“People should not be carried away by political gimmicks and razzmatazz,” he said, referring to the rebasing of the economy.

“The power sector is getting worse, local infrastructure, the roads and employment rate are there, unchanged.

“It is not about effort being made. You may be making efforts but the efforts are not just good enough for the people.

“It should not take eternity for Nigeria to be transformed,” he insisted.

“How does the rebasing of the economy translate into a better life for the ordinary man? You think the ordinary man on the street will be interested in knowing how the quality of his life is, in the face of unemployment, insecurity broken down infrastructure.”

He stressed the need for the government to improve the productive base of the economy with focus on agriculture, stressing that his political party is advocating a full blown agriculture with mechanised system in Nigeria .

The former Senator stressed that the problems of preservation and transportation – access roads to farm and then to the market – should be addressed in order for proper diversification of the economy to take effect.

He also observed that the delay in the presentation of the budget had contributed to the poor implementation, urging the executive to, as much as possible, present the budget earlier than they have done in previous years.