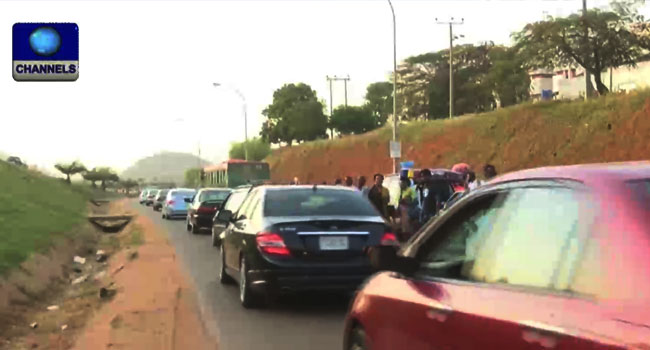 Robbing of passengers in commercial vehicles known as one chance is a growing threat to security in Abuja, the nation’s capital.

Residents of the city have ugly tales to tell following the loss of their valuables to the criminals almost on daily basis.

One of them is Chris Agabi, who recalled his nasty experience in the hands of the fraudsters said he was robbed of his bank account after being held hostage.

“At about 2 pm, they abducted me and took me to an unknown place. They held me hostage in the car, took my ATM and made sure the pin I gave them was correct.

“They want to the nearest ATM around Kado and withdrew all that was left in my two accounts and went and dropped me around Kado estate,” he said.

Similarly, another victim, Christiana Uzoba, said she played into the tricks of the criminals while visiting a bereaved family member.

“I boarded this taxi at about 6:15 to 6:20am. There was a guy in front and a lady so I was the last person that joined the taxi.

“After boarding the taxi, before we got to Jaiz bank, they started beating me. They were beating me, suppressed and forced me in between the car seat to ensure I don’t exercise any form of struggle.

“They blindfolded me, collected my bag containing my office laptop. They went through my phone and saw all the messages. So they instructed me to transfer the money I had in my Zenith, Diamond and GT bank accounts.

“They made sure I wiped off all the money I had. They had POS, they withdrew from the POS. At some point the POS wasn’t paying. They started driving around town, blasting music in their car so even if I wanted to scream, nobody would hear me,” she said.