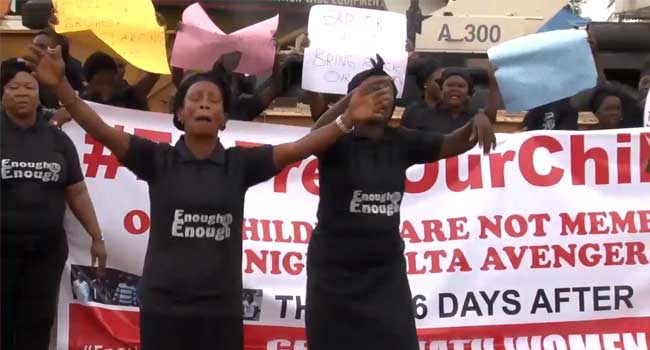 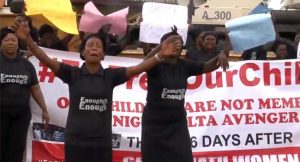 The people of Oporoza community, the headquarters of Gbaramatu Kingdom, Warri South West Local Government Area, Delta State have staged a protest demanding the release of some of their youths allegedly captured by the Nigerian Army several weeks ago.

According to them, the military invaded their community under the guise that they were in search of the Niger Delta Avengers, destroying and carting away valuables as well as capturing some youths.

The protest comes a month after the alleged invasion of the Nigerian Army on Gbaramatu community.

They claimed that their captured loved ones were neither directly nor indirectly connected to the Niger Delta Avengers.

They have appealed to President Muhammadu Buhari to call the military to order to release the youths.

Meanwhile, one of the officers at the Nigerian Army 3rd Battalion in Warri, Delta State, who preferred to be anonymous confirmed to Channels Television that the youths were indeed arrested but were being interrogated for various offences.

He said that there is no need for their friends and families to entertain any fears as they have not been killed as alleged but were merely going through routine investigation.

He said that they were arrested in the wake of several attacks on pipelines in the Niger Delta.

The Gbaramatu community has been in the limelight in recent times following speculations and allegations that one of its indigenes popularly known as Tompolo is connected to the Niger Delta Avengers.