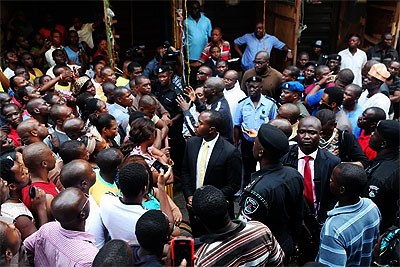 Lagos State Governor, Mr. Babatunde Fashola (SAN), today visited the scene of Saturday’s fire disaster, Euroasia Plaza, on 10/12 Breadfruit Street and afterwards ordered that the street be cordoned off until firemen completely put off the fire and have engineers determine the structural strength of the building even as he sympathized with traders over the incident.

The Euroasia Plaza which is a five-storey building housing wholesale and retail shops as well as a branch of a major commercial bank, was engulfed by fire in the afternoon of Saturday with the two top floors collapsing on each other just as men of the Lagos State Fire Service, arrived in good time to battle inferno on the fourth and fifth floors of the building atop a Bronto Skylift, an aerial ladder firefighting equipment, a battle that the firemen are still fighting.

Speaking to newsmen after inspecting the damage, Governor Fashola said it was expedient to cordon off the street on which the building stands for the safety of all which will ensure that further incident will not be recorded after the incident as no one could yet determine the structural strength of the damaged building.

“At this stage, we are still battling with the fire. We are yet to know the strength of the damaged building; but meanwhile, the paramount thing is to minimize the loss. I have asked the Divisional Police Officer here to cordon off the street. Our Engineers will come to determine the structural strength of the damaged building”, the Governor said.

After visiting the scene of the incident, Governor Fashola addressed traders and other stakeholders in the area appealing to them to cooperate with the police and the firemen by being patient until both the firemen and the structural engineers finish their work on the building explaining that it was necessary to prevent people from trading or going near the building in order to avoid loss of life.

He told the agitated traders, “I apologize to you and others who are doing business here, but we are taking precaution to avoid any loss of life. Every other thing that is lost in the fire is replaceable but we cannot replace life. So let us eliminate the fire and save life”.

He advised them and others living or doing business around the building to keep a safe distance from the building until engineers assess its strength to determine how safe it is adding, “You can see, the fire is not fully out. Until we finish our work, we will not allow you to go close or into the building to avoid any loss of life”.

Responding to a question by one of the affected traders on what Government would do to assist them, Governor Fashola said the major priority for now was to ensure the safety of all, the complete stoppage of the fire and determination of the structural integrity of the building adding that when work on the building was finished, the possibility or otherwise of traders retrieving their goods will be determined following which government could assess and assist on the losses.

The Governor, however, advised the traders not to crowd around fire disaster scenes in future in order not to obstruct firemen from seeing to their core duty, that is to put off the fire adding that such obstructions would not only lead to further spread of the fire but could increase the possibility of loss of life.

“We appreciate your efforts to put out the fire. We understand your sense of being your brothers’ keepers. But it must stop. We have built the capacity to fight fire disasters so your efforts can only aggravate the damage and increase the danger of loss of life. Henceforth, you should keep off the scene and allow professional firemen to do their job”, the Governor said.

He said the difficulty experienced by firemen while trying to gain access to the scene was caused by the traders who chose to trade on the streets instead of the modern markets built by the Government in different parts of the State adding, however, that Government would continue to engage with the traders on the issue.

Governor Fashola also advised the traders to take out insurance policies on their businesses against loss and damages such as they experienced as a result of the fire pointing out that in cases like the present fire disaster, insurance companies with which they insured their goods would come to their aid.

Addressing another group of traders and residents of the area at the Martin Street roundabout, the Governor again reiterated the necessity of Government’s action in cordoning off the Breadfruit Street adding, however, that anybody who goes in there would be arrested by the Police.

As at the time of the late morning visit, firemen were still battling with the fire as they continuously fired jets of water towards the smoking ruins of the top floors. No less than 10 modern fire trucks, including aerial ladders, were deployed on the street to fight the fire and prevent it from spreading to adjourning buildings.

The Commissioner for Special Duties, Dr. Wale Ahmed, the Special Adviser on the Central Business District, Mrs. Derin Disu were part of the entourage of the Lagos State Governor on the Breadfruit fire visit plus other top government officials.